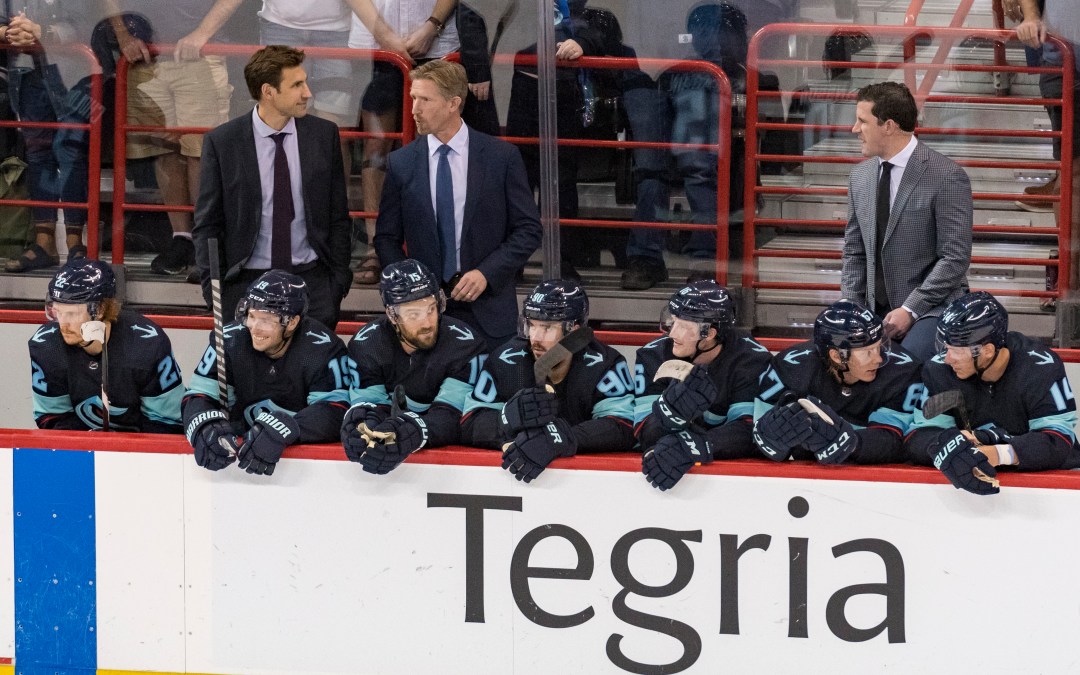 In Part 1 of this series, I noted a few general observations about Kraken coach Dave Hakstol’s coaching system, including my suggestion that Hakstol is a “system-intensive” coach.

In this Part 2, I start the process of digging into the schemes the Kraken use in various gameplay situations as I have observed them, beginning with the neutral zone forecheck.

In hockey, the term “forecheck” indicates the approach or strategy to regaining control of the puck, either by winning a loose puck or disputed possession, or by forcing a turnover of an opponent’s possession. It should be noted that the term is also frequently used in a narrower sense to describe a type of offensive strategy that uses a dump-and-chase approach to initiate an offensive zone set.

Here, the phrase is used in the general sense: When the puck is in dispute or the opponent is in possession, how do the Kraken win it back?

Hakstol presents as a coach focused on stopping opposing offenses. Indeed, as will be shown in this series, the through line of Hakstol’s scheme is preventing scoring chances against.

Whatever else can be said about the Kraken’s inaugural season performance, the team has been very successful at suppressing opponent scoring opportunities during the first half of the 2021-22 season. Per NaturalStatTrick, the Kraken have conceded the fifth fewest high-danger scoring chances against in the league and the second fewest expected goals per game. Another source of analytics, TopDownHockey, situates Seattle as giving up the third fewest expected goals per game.

How do the Kraken achieve this? It requires work in all three zones. In the defensive zone, for example, the Kraken are willing to concede opponent possession and shots on the perimeter but collapse to deny passes and shots in the slot.

When the Kraken have the puck in transition, the scheme favors getting the puck deep into the offensive zone for retrieval rather than attempting controlled possession in the neutral zone (and the attendant opportunity for turnovers that could turn immediately into a high-danger counterattack). This keeps the puck 200 feet from danger.

And when the Kraken get set up in the offensive zone, the scheme sacrifices some offensive flexibility in order to keep defensemen high in the zone, protecting against counterattack rush opportunities. I will get into each of these elements later on.

But perhaps most notable in watching the Kraken is Hakstol’s personnel and schematic emphasis on a connected and aggressive forecheck.

Personnel-wise, the priority is on forwards that can play with speed and scheme discipline to actively pressure opponents in their own end or the neutral zone. System fit was likely a factor in Seattle’s decision to waive offensive playmaker Alex Barre Boulet after just two games of poor defensive play. Contrast this with the fact that the team has found room to claim multiple speedy and defensive-minded bottom-six forwards off waivers in recent weeks. Hakstol’s approach favors these players.

Schematically, the goal is to force the opponent to concede control of the puck before entering the Kraken’s zone, either by a turnover or by simply dumping it into the Kraken end.

The Kraken use a 1-2-2 defensive formation in the neutral zone when the opponent has full control of the puck in their end. It is especially visible following a change or when the opponent is attempting to transition through the neutral zone. This is a scheme Hakstol has coached since midway through the 2017-18 season with the Flyers, and it is a common one in the NHL.

The forward closest to the puck (F1) assumes a position at the top of the formation and presses the opponent to commit to an attack or allow his teammates to change. F1 will also look for turnovers opportunistically. The next level (F2 and F3), look to deny the red line, which would cause the opponent to ice the puck if they simply fired it into the Kraken zone. Secondarily, this layer is looking to either funnel the attacker into a small area that the defensemen can then rotate over and cut off or force a lengthy dump-in from just across the red line.

The last layer (D1 and D2) looks to deny controlled entries into the zone (meaning zone entries where the opposition can carry the puck over the blue line, rather than dumping it). But the defensemen are reading the play in front of them and will retreat toward their defensive zone positioning if the opponent rush has broken down Seattle’s structure.

In the diagram above, F1 forces the play, while F2 moves to check the recipient of the pass in the neutral zone and funnel the player into a position where the near defender, D1, can step up and deny the opposing player a controlled zone entry.

It is notable that coach Hakstol’s version of the 1-2-2 is either inherently aggressive in its player positioning, or it at least permits the players to be more aggressive than some other systems in the NHL. Particularly early in the season, the middle layer (F2 and F3) frequently moved close to the opponent’s blue line with the the third layer (D1 and D2) on or near the red line. A more conventional and conservative version of the 1-2-2 leaves the second layer nearer the red line with the third layer nearer the defensive blue line (as shown in the above diagram).

If Hakstol is indeed teaching a more aggressive 1-2-2 forecheck, it’s not entirely surprising, given that until 2017-18 he favored a 1-3-1 neutral zone system that regularly placed 4 skaters at or ahead of the red line.

Aggressive positioning creates significant congestion on the opponent’s end of the ice and is intended to win an early turnover and facilitate a rapid transition back to offense.

When this aggressive approach fails to win an early turnover, however, the defense is retreating and playing catchup. Even more problematically, aggressive forechecking can break down the team defense unless the entire team is well connected on the ice. If the second layer (F2 and F3) read the play one way and move far forward while the third layer (D1 and D2) read it another way and hang back, the collective five-man unit has just opened a large seam for stretch passes to successfully connect through the neutral zone. In this case, the forwards are left to sprint back into the play from far out of position.

In clip 1, you see an example of the Kraken assembling in a 1-2-2 formation against a three-across line rush by the Anaheim Ducks. The Ducks defenders are looking for a change and the willingness of the Kraken’s second layer–particularly Austin Czarnik, No. 27–to move to deny the red line causes the Ducks to concede an uncontrolled zone entry from a standstill at the blue line. This is a win for the defense.

While it may be hard to remember early in the season, if you rewind to the opening road trip, Kraken fans and media did not have any complaint about the quality of the goaltending. Instead, the Kraken were conceding an inordinate number of rush opportunities to the opposition, and therefore exposing the goaltenders to numerous dangerous chances each game.

I’d allocate much of the team’s early defensive struggles to the team’s inability to play “connected” in this communication-dependent neutral zone system early in their inaugural season. In this regard, it’s fair to wonder whether the coaching staff erred in deploying a relatively difficult defensive scheme with so little practice time rather than adhering to a conservative 1-2-2 structure early with this entirely new team.

In clip 2 above you can see an example of the ultra-aggressive positioning of the second and third layers of the neutral zone forecheck at about the nine-second mark. In this sequence the forecheck is successful, causing a turnover at the defensive blue line and leading to transition and a controlled zone entry heading in the other direction.

Since those first half dozen games, however, the Kraken have learned to moderate and harness the aggression in their 1-2-2 forecheck structure. The team now does a much better job playing together when the second layer has decided to engage in a more aggressive forecheck.

In clip 3, Mason Appleton, No. 22 for Seattle, plays the F1 role and denies Kevin Shattenkirk, No. 22 for Anaheim, any passing lane except directly up the boards. Reading the play, the next layers of Kraken coverage know they can rotate toward the strong side boards because Appleton has forced the issue. This allows Yanni Gourde, No. 37 for Seattle, the opportunity to deflect an attempted stretch pass through his coverage at the red line, leading to a turnover onto the stick of Jamie Oleksiak.

It is still not perfect. Clip 4 shows the second layer of forwards moving ahead while the defensemen are changing. The result is that the defense and forwards are not synced in aggressive neutral zone coverage. This creates space for a breakout pass to the neutral zone and a Panthers line rush in transition. The Kraken forwards are left to sprint back into the play, and Morgan Geekie is a step late in catching his check. The end result is a quality scoring sequence and a Florida goal. The communication wasn’t where it needed to be on this play, and it is an issue that is less likely to have arisen if the 1-2-2 was set up more conservatively.

On balance, as the season has progressed, the neutral zone forecheck has proven to be a team strength. Indeed, after the first half dozen games, the Kraken have denied opponents the ability to enter Seattle’s defensive zone with control of the puck as well as any team in the league. Per analyst Corey Sznajder, the Kraken are conceding the fourth fewest zone entries per sixty minutes that lead directly to a scoring chance.

In Part 3 of the series, I examine how Kraken coach Dave Hakstol implements his defensive approach once the opponent is established in the Kraken’s defensive zone.