SOH LIVEBLOG: Kraken fight back after bad start, but lose 5-2 to Islanders 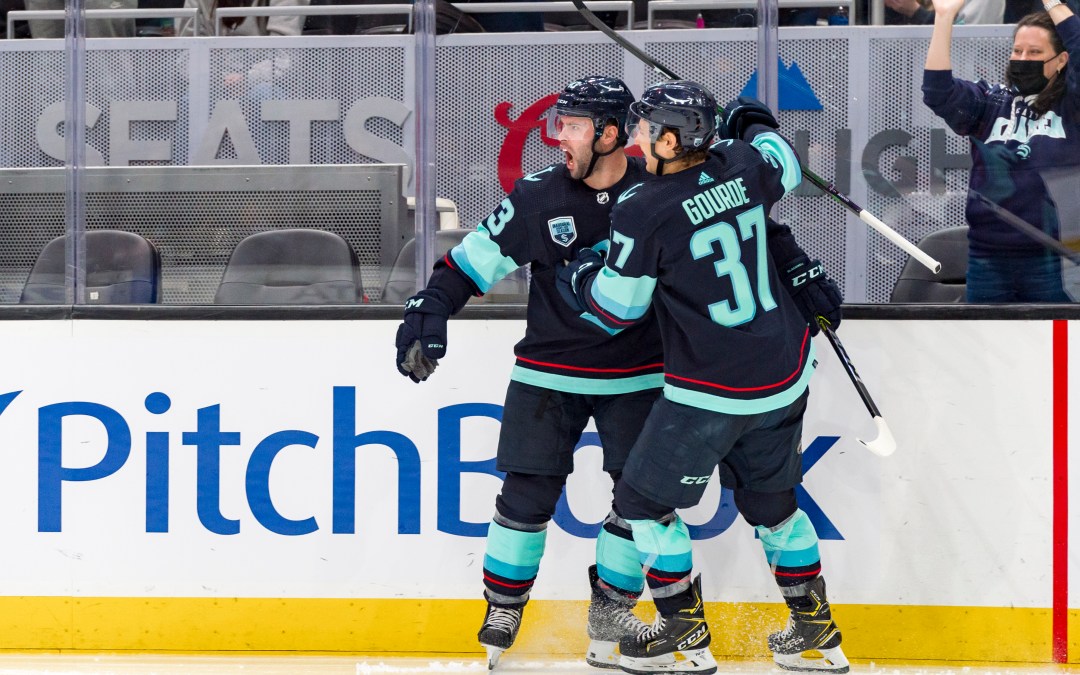 There’s no place like home, or at least that’s what we’re telling ourselves. Seattle is back at Climate Pledge Arena on Tuesday for a needed respite from the road, after a painful 0-3-0 road trip. The Kraken take on a New York Islanders team on Tuesday that it defeated 3-0 on Feb. 2, when Philipp Grubauer earned the first shutout in franchise history.

Speaking of Grubauer, he also played great on Saturday against the Flames, stopping 35 of 37 shots in a hard-luck loss. The performance was good to see after he had strung together three less-than-impressive performances in a row, including a home loss to Toronto in which he gave up three goals on 11 shots and found himself on the bench after 20 minutes.

He deserved a victory over a very good team in Calgary, but was done in by a spinning Elias Lindholm wrister in the third period and insufficient offensive support throughout. Here’s hoping he can build off that outing on Tuesday.

Grubauer will be playing behind a team on tired legs, so he is likely to be under duress more frequently than he was on Long Island a few weeks ago.

It has been a disappointing season for Morgan Geekie, who has not produced at a level that we expected from him coming in. He has just two assists in his last 14 games and has been relegated to the fourth line and scratched from the lineup on several occasions.

Geekie had one of his best games of the season Monday against the Canucks, though, and did everything but score. He drew three penalties, set up a couple opportunities, and ascended to the top line to close out the game. He also had a near goal on the back door on which Thatcher Demko made a miraculous sprawling save.

Austin Czarnik is getting back in against his old team, which recently had meant Geekie would be scratched. Instead, Joonas Donskoi will be scratched for the second time this season.

“When you get to a critical part of the game, you look for guys that are looking to make a difference versus just trying to get through a shift,” coach Dave Hakstol said, in reference to Geekie’s game against Vancouver. “We need him to be at a similar level [Tuesday].”

It’s been a disappointing season for the Isles, who spent their first 13 games on the road while they waited for the completion of their new arena. It started off decently, but then New York went on an eight-game losing streak and has never really recovered. The Isles are now in sixth place in the Metropolitan Division, and the pre-season hope that they could be Stanley Cup contenders has faded.

Former Thunderbird superstar Mat Barzal is making his Seattle NHL debut, and Zdeno Chara is playing in his 1,651st career NHL game. That will tie Chris Chelios for the NHL record for games played by a defenseman.

For more on this Kraken opponent, check out our Islanders Enemy Report.

We mentioned that Czarnik and Geekie are back in. Hakstol also confirmed that Haydn Fleury will return to the lineup for Carson Soucy.

The current Thunderbirds lineup will be in attendance to see Barzal play. Neat!

The Islanders scored first at 8:53. Anthony Beauvillier got the puck on the right half wall and chipped it past Calle Jarnkrok to Brock Nelson. Nelson stickhandled a bit, then lofted a deceptive wrist shot over the shoulder of Grubauer.

The Islanders extended their lead to 2-0 at 17:19. Barzal shot from the point, and Zach Parise, in his office at the top of the crease, got a piece of it to deflect it past Grubauer. Initially, the referees disallowed the goal for incidental contact between Parise and Grubauer, but Islanders coach Barry Trotz successfully challenged the call.

The first period ended with that same score, and it was not a very good frame for the Kraken, who looked very much like they were on the second of back-to-back games. The Islanders took 80 percent of the high-danger shot attempts, had 75 percent of expected goals, and held a 13-4 lead in shots on goal.

The Kraken continued to look slow in the opening stages of the second, and five minutes into the period, still had just four shots on goal for the whole game. The Islanders took advantage. Barzal won a puck battle behind the net and got the puck to Parise, who passed to Kyle Palmieri in front of the net. Palmieri got rid of it quickly, and made it 3-0 at 5:34.

The Islanders scored again at 10:33, when Scott Mayfield slapped a shot off the endboards. It rebounded right back out in front, and Casey Cizikas was there to put it back in a yawning cage.

The Kraken finally got on the board a few minutes later. Off an offensive zone face-off win, Yanni Gourde cut across the circle and shot the puck off the crossbar and down.

The Gourde goal seemed to ignite the team and wake up the home crowd, as the Kraken had the better of the play for the reminder of the period with several good chances.

Still, they went to the room with a big hill to climb, down 4-1.

The Kraken carried their newfound life into the third period and got a lucky goal early. A rim attempt by New York hit (we think) the little camera that’s built into the boards behind the net. Rather than swinging around to the other side, it took a right turn right onto the stick of Riley Sheahan, who tucked it behind Sorokin.

Parise added an empty netter to make it 5-2 and seal it for New York.

The Kraken fought back in this one, but it was too little, too late after a miserable start.

Check back often, as we will update this article throughout the game.