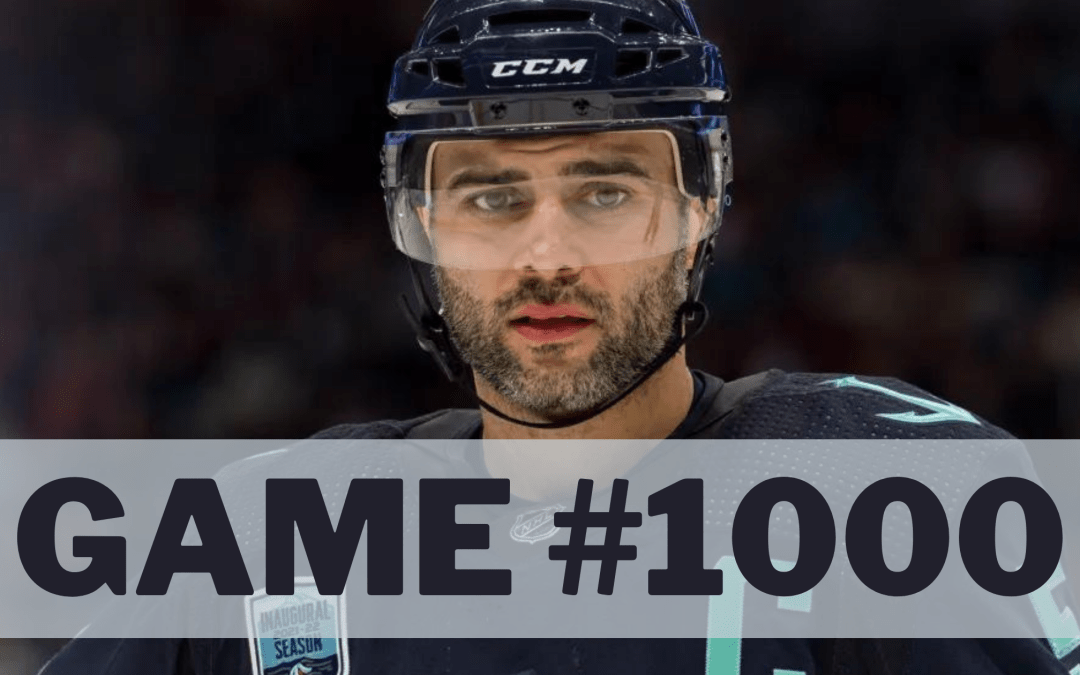 It’s a new dawn, it’s a new day, and the Seattle Kraken are feeling good. That’s because they finally snapped their seven-game losing streak on Wednesday against the Predators, Jared McCann and Jaden Schwartz are likely to return to the lineup, and Kraken captain Mark Giordano will skate in career game No. 1,000 when Seattle visits the Washington Capitals on Saturday.

A milestone for Mark Giordano

We’ve recently been joking on the Sound Of Hockey Podcast about how the hockey world celebrates players for hitting “round number” milestones, even though we may not necessarily understand the significance. Is 300 goals really that good? What about 500? Why don’t we celebrate No. 501 instead? It all feels somewhat arbitrary, when you think about it.

Jokes aside, we do understand the significance of 1,000 games. Yes, it too is simply a round number, but the longevity required to reach that number is something that all players strive for and only a select few achieve.

“It means a lot,” Giordano said at morning skate. “It was an up-and-down journey for me to get into this league, but I feel like I put a lot of hard work and a lot of years in, and [it’s] definitely a milestone that I’ve been looking forward to and feel a huge sense of accomplishment.”

The early portions of Giordano’s NHL path were winding. After going undrafted, Giordano was set to attend York University, but received an invitation to Calgary Flames’ prospect camp and earned an AHL contract in 2004. He got called up to the Flames for the first time in January 2006 but couldn’t come to an agreement with Calgary for a one-way contract after that season. A two-way deal would have made it more likely that he would get sent back to the AHL, which he did not want. So Giordano bet on himself in a big way and signed with HC Dynamo Moscow in Russia. He then came back to Calgary for the 2008-09 season.

In all, he played parts of 15 seasons with the Flames before being selected by the Kraken in Seattle’s Expansion Draft. The former Norris Trophy winner has 149 career goals and 383 assists. The captain has served as a great role model for the Kraken’s younger players and has been the perfect ambassador to help shepherd Seattle into the NHL.

“It’s well known that I sort of came into my own a little later than the average guy, so I still feel like I do have game left, and I still can contribute in a positive way,” Giordano said. “I still have a really good passion, and I feel like I still love hockey. I love watching hockey, I love playing, so I have no intention of not playing in the near future.”

“Playing No. 1000 today, he’s just the absolute model of character, of competitiveness,” coach Dave Hakstol said of the team’s captain. “He shows leadership in everything that he does, so for him and for our team and for his family, this should be a pretty special day.”

A ceremony to honor Giordano is expected to be held at Seattle’s next home game on March 16. Here’s hoping he doesn’t get traded before then.

Schwartz and McCann returning (we think?)

Hakstol implied there were still lineup decisions to make, but he projects Schwartz and McCann will be available Saturday.

McCann’s absence hasn’t been terribly long, as he has only missed three games with an upper-body injury, but any time your top scorer goes on the shelf for any stretch, it is impossible to replace him in the lineup. So, his return will be a welcome one.

This also feels like a great time to remind you that we spoke with McCann on the latest SOH Podcast, and it was a fantastic interview, so give it a listen if you haven’t already.

Schwartz back in a Kraken jersey will be a sight for sore eyes. The veteran forward has missed a whopping 25 games with a hand injury sustained on Dec. 29 against Philadelphia. It happened on an innocuous-looking play, but Schwartz got up grimacing, and news came out a few days later that he had undergone surgery.

Before going on injured reserve, Schwartz was a staple on an effective top line with McCann and Jordan Eberle and was the bumper on Seattle’s top power-play unit. He had six goals and 14 assists in 29 games.

With Schwartz and McCann now officially active, Austin Czarnik was placed on waivers. The team also sent Kole Lind back to the AHL on Thursday to make room on the roster.

The first time these teams played each other on Nov. 21 was one of the most memorable nights of the inaugural season at Climate Pledge Arena. Facing a star-studded Capitals lineup, the Kraken played phenomenal team defense, got a goal and three assists by Schwartz and a power-play goal by McCann, and Philipp Grubauer made 37 saves to help snap a six-game losing streak.

On Saturday, Seattle will again face netminder Vitek Vanecek, who was selected by the Kraken in the Expansion Draft and then traded back to Washington. Vanecek is having a good season with a 11-7-5 record, 2.26 goals against average, and .920 save percentage.

Chris Driedger will get his second consecutive start for the Kraken. Driedger didn’t have his best outing of the season on Wednesday, stopping 19 of 22 shots, but he played well enough to get the win. So, Hakstol is rewarding him with another nod tonight in our nation’s capital.

The Capitals as a whole are solidly in a playoff spot with 67 standings points. Alex Ovechkin, who has been in the news lately after facing questions about his support of Russian President Vladimir Putin, is having yet another insane season. Ovechkin has 33 goals and 32 assists, and he did score one of Washington’s two goals against Seattle in November.