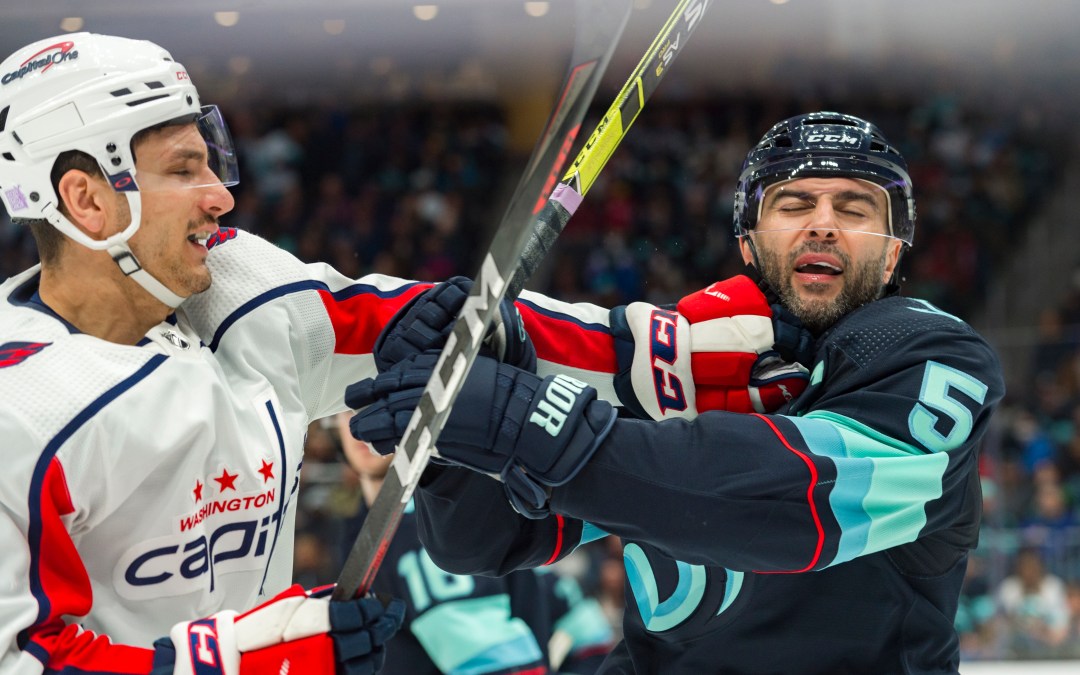 Mark Giordano is skating in his 1,000th career game, Jared McCann and Jaden Schwartz are both back in the lineup, and our good friend Alison Lukan is doing color commentary for ROOT Sports! This game between the Kraken and the Capitals should be a fun one.

We normally combine a semi-robust game preview with the liveblog on game days, but with so much Kraken news lately, we thought it would be best to do a separate story to prepare you for Saturday’s game. So, for all the latest Kraken news, please give this story a read.

For live updates during the game, stay right here!

This lineup looks a heckuva lot better with Schwartz and McCann back, doesn’t it?

As was the case the first time these teams played each other, Tom Wilson got the game’s first goal. Ovechkin broke into the Seattle zone and lost the puck, but it rolled right to Wilson. The big-bodied Wilson barreled toward the net and fired it past Driedger to give Washington a 1-0 lead.

It took just 34 more seconds for the Capitals to extend their lead to 2-0. Nic Dowd passed low to high to Dmitry Orlov at the top of the left circle. Orlov one-timed the pass, and it squeezed right through Driedger’s five hole. Not a great goal.

Joonas Donskoi got the boys back in the game at 16:56. Jamie Oleksiak shot from the point. It got deflected and didn’t make it all the way through to Vitek Vanecek, but instead landed right on the stick of Riley Sheahan, who was planted at the top of the crease. Sheahan tried to tuck it around the outstretched pad of the Capitals netminder, but he stopped it and kicked a rebound right to Donskoi. Donskoi tucked it into a wide-open net for just his second goal of the season, bringing Seattle back within one.

The Kraken had some great offensive zone time in an exciting opening period, but conceded two goals in quick succession. Seattle held a 10-7 lead in shots on goal and had 57 percent of shot quality in the opening frame.

Early in the second, the Mason Appleton-Yanni Gourde-Colin Blackwell line struck again, after a great game on Wednesday. Off a rush, Blackwell carried the puck into the Washington zone, and looked like he was going to dish to Gourde. But he opted to go hard to the net, nearly lost it to John Carlson on the way, got it back and snuck it around Vanecek to make it 2-2.

Schwartz was racing for a puck with Orlov and accidentally took him down in a dangerous position, sending Orlov hard into the end boards at 9:55. A melee ensued, but Schwartz got the only call for hooking. That gave the lethal Capitals power play its first opportunity of the game, which the Kraken almost killed off. But with seven seconds left on the man advantage, Ovechkin shot into traffic. It pinballed onto the stick of Wilson, who shot into the pads of Driedger, and that rebound went right onto the stick of Conor Sheary. Sheary had a wide-open net and gave the Capitals a 3-2 lead.

Ovechkin wasted no time stretching Washington’s lead back to two to start the third period. With Carson Soucy still in the penalty box after taking a holding penalty late in the second, Carlson put the puck on a tee for Ovechkin, right in the area where Ovechkin has scored so many of his 764 career goals. Ovi one-timed the pass and blasted it by Driedger to make it 4-2.

Sheary scored an empty-net goal, his second marker of the game, to make it 5-2 and seal the deal for Washington.

The Kraken played well in this one, but special teams were the difference. The always dangerous Capitals power play connected twice, while Seattle came up empty in that area.