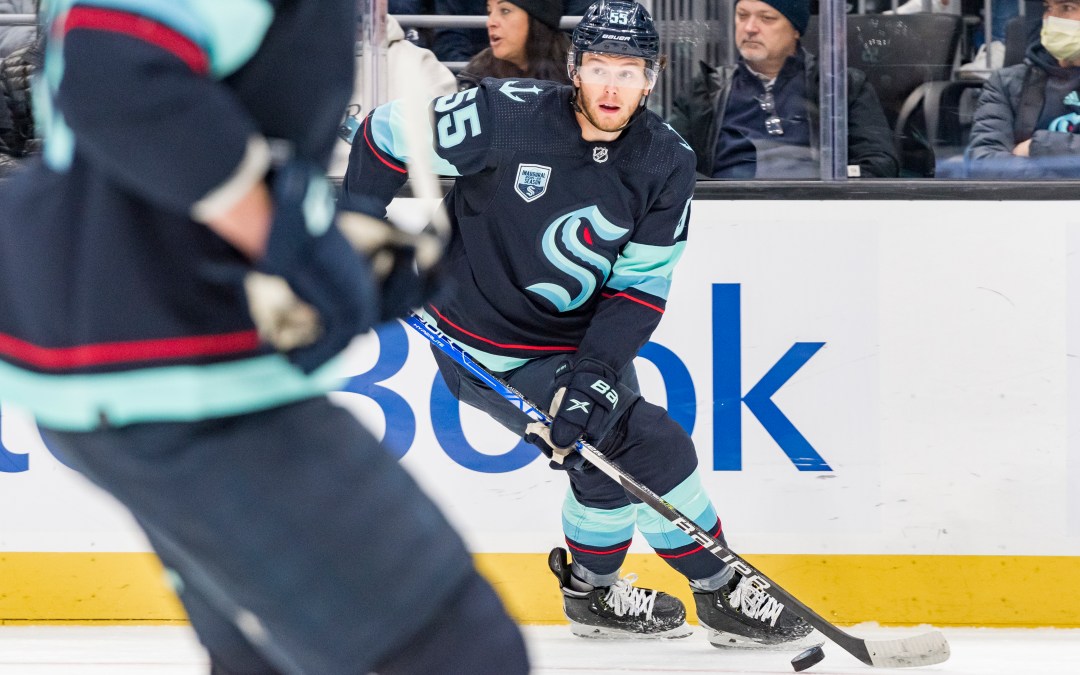 We know it has been a big day in Seattle sports news (with the biggest news, of course, being the five-year contract extension for Jared McCann), but we are here to remind you that there is also a Seattle Kraken game against the Toronto Maple Leafs on Tuesday!

This is the SOH Liveblog for that game. We will update this article with highlights as the game goes on, so check back often!

These teams played each other a few weeks ago at Climate Pledge Arena, and it did not go well for the Kraken. That night, Seattle got spanked 6-2, as Philipp Grubauer gave up three goals on 11 shots and was lifted after the first period.

That first meeting between these clubs was one of just a handful of times the Kraken have looked outclassed this season, as they were dominated from the drop of the puck.

The high-flying Leafs have struggled a bit, lately. They have had a middling 5-4-1 record over the last 10 games, and their goaltending has been called into question regularly by the rabid Toronto fanbase and media. Jack Campbell—who was such a huge part of this team’s success earlier in the season—has faltered lately with four straight games under a .900 save percentage, allowing 19 goals in that stretch. Campbell will get the nod Tuesday.

At the other end of the success spectrum, Auston Matthews has continued to tear up the NHL and became the first player in the league to hit the 40-goal plateau Monday against the Columbus Blue Jackets.

The Leafs are on the second of back-to-backs after a 5-4 win Monday in Columbus.

Here are the Seattle Kraken lines against the Toronto Maple Leafs. Looks like Haydn Fleury, Will Borgen, and Ryan Donato are scratches once again.

Prior to the game, Wayne Simmonds was presented with a silver stick for playing in his 1,000th career game on the same night that Mark Giordano also hit that milestone.

Joonas Donskoi took a tripping penalty at 2:46, giving Toronto’s top-ranked power play its first opportunity of the game. It did not take long for the lethal unit to strike. Morgan Reilly passed across to William Nylander, who went through the seam to Matthews. Matthews fired before Grubauer could get set, and just like that, it was 1-0 at 3:18.

The Kraken responded quickly. 2:03 of game time elapsed before Carson Soucy scored his seventh goal of the season to set a career high. He shot from the point and hit Mason Appleton in front of the net. The puck squirted back out to Soucy, who got a second shot away before Campbell could fully recover from the initial try that didn’t get through. With that, it was 1-1 at 5:21.

The early maelstrom of goals continued when TJ Brodie sent a stretch pass to Pierre Engvall at the Kraken blue line. The quick-up pass broke down Seattle’s neutral zone coverage and allowed John Tavares to sneak into the offensive zone untouched. Engvall hit Tavares with a little touch pass, and Tavares scored off a partial breakaway to make it 2-1.

Seattle was closing in on killing off a Jeremy Lauzon tripping penalty, but with just a few seconds left in the Toronto power play, Mark Giordano shot a puck over the glass from the Kraken defensive zone and was called for delay of game. With nearly four consecutive minutes of zone time, the elite Leafs power play did eventually break through for the second time. Nylander shot from the right hashmark, and with Tavares creating some confusion in front, the puck just squeezed through Grubauer to make it 3-1.

The Kraken answered once again with a pretty passing play through the neutral zone. Marcus Johansson made an outlet pass to Jordan Eberle in the neutral zone, then sprinted up the ice to get in on the rush. Eberle passed to Alex Wennberg, who passed back to Johansson, who then went right back to Wennberg in the slot. Wennberg chipped it by Campbell and brought Seattle back within one with his third goal in four games.

Giordano took his second penalty of the period, which made us think Seattle was really playing with fire. But on the Toronto power play, Jamie Oleksiak forced a turnover in Seattle’s zone and Yanni Gourde was off to the races with Colin Blackwell. On a two-on-one, Gourde passed to Blackwell, who put it home with a nice finish and leveled the score at 3-3.

The second period ended with the score level. The Leafs held a slight advantage in shots on goal through 40 minutes, but they had close to 62 percent of the shot quality.

At 5:57 of the third period, Jeremy Lauzon blasted a shot from the right point. Jaden Schwartz got a piece of the puck and redirected it down ever so slightly. The change in direction was just enough to throw Campbell off the scent, and give Schwartz his first goal since returning from hand surgery.

The lead was short lived. Seconds after Grubauer had made an outstanding save, the Kraken gave the puck right back to the Maple Leafs. Michael Bunting raced in with Matthews and got it to the NHL’s leading goal scorer, who made a beautiful move to tie the score at 4-4.

Then, just 40 seconds later, with Soucy in the box for cross checking, Mitch Marner faked Joonas Donskoi out of his jock and scored through traffic to give the lead back to Toronto, 5-4.

That was Toronto’s third power-play goal of the night.

Matthews added an empty-net goal to complete his hat trick and solidify a 6-4 win for Toronto.

That was a tough loss for the boys, who finally got some offensive production but were again doomed by the special teams battle.

The Kraken have now lost three games in a row and 10 of their last 11.