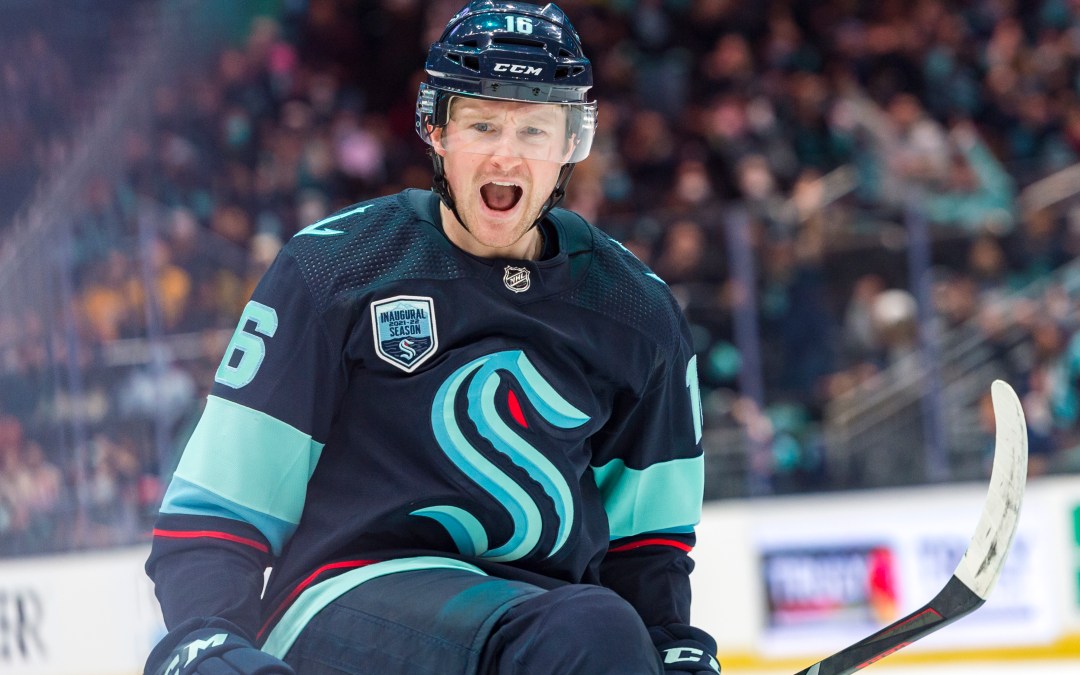 The Seattle Kraken got their guy. On Tuesday the team announced that Jared McCann had signed a five-year contract extension that will pay him an average of $5 million per season. Barring a trade, the deal will keep McCann in Seattle through the 2026-27 season. It is the first contract extension ever to be signed by a Kraken player.

With an expanded role, McCann has had a breakout season in this inaugural Seattle campaign and leads the team in both goals (21) and points (33). His 21 goals represent a career high for him, and the team still has 23 games left to play, so his stats could certainly increase before the end of the season.

His impressive year made some wonder if McCann and his agent, Joe Resnick, would be looking for the type of deal that could cause negotiations to drag on. But the 25-year-old forward continued to indicate that he was very happy with Seattle and the opportunities he was getting.

In fact, we had McCann on the Sound Of Hockey Podcast last week, and he was not shy about saying he wanted to stay in Seattle long term.

General manager Ron Francis said there had been conversations about an extension between the team and Resnick throughout the season and that the dialogue picked up steam just before the All-Star break. “Working with Joe and Jared was never contentious,” Francis said Tuesday. “It was always having the open, honest discussions, and getting to the point we felt that both sides were covered with the deal. That’s why it got done the way that it did.”

The extension shows that the Kraken view McCann as part of their core as they continue to build out the franchise. “It sends a message,” Francis said. “Certainly in Jared’s case, he’s excited to be in Seattle, excited—as a lot of our players are—the way the ownership and management treats the players. [They’re] excited about the passionate fanbase and the city itself and want to be here as we build this thing and become more and more successful.”

McCann himself seems thrilled to have some security. “It’s a lot of pressure off my shoulders,” McCann said of the extension. “I can just focus on playing hockey, and obviously it’s a huge honor to get that deal and to be a part of this for the future.”

We’ve seen fans in the Kraken Twittersphere calling on Francis to get a deal done with McCann, who has proven to be arguably the best find of the entire Expansion Draft. What sometimes gets lost, though, is that a player going to RFA status has very few options, and the team holds most of the leverage in those scenarios. With the very few options available to a player in RFA status, we knew a McCann extension would get done at some point. The question was always simply about the term and money needed to complete the transaction.

We also believed from talking to McCann on several occasions that he was not interested in a knockdown, drag-out type of negotiation. He always seemed to be very happy in the Pacific Northwest and genuinely thankful to be getting consistent top-line minutes for the first time in his career.

As far as the number is concerned, five years at $5 million is a perfect landing spot. It shows a long-term commitment by the club but doesn’t hamstring Francis or preclude him from going after high-end free agents in the offseason. From McCann’s point of view, it gives him the security that has been lacking in his career—this is technically his fifth NHL organization, though he never played a game for Toronto—and is a nice, deserved raise from the $2.94 million AAV that his current contract is paying him.

We love this deal, we love this player, and we are pleased that this got done well in advance of any possible offseason drama.