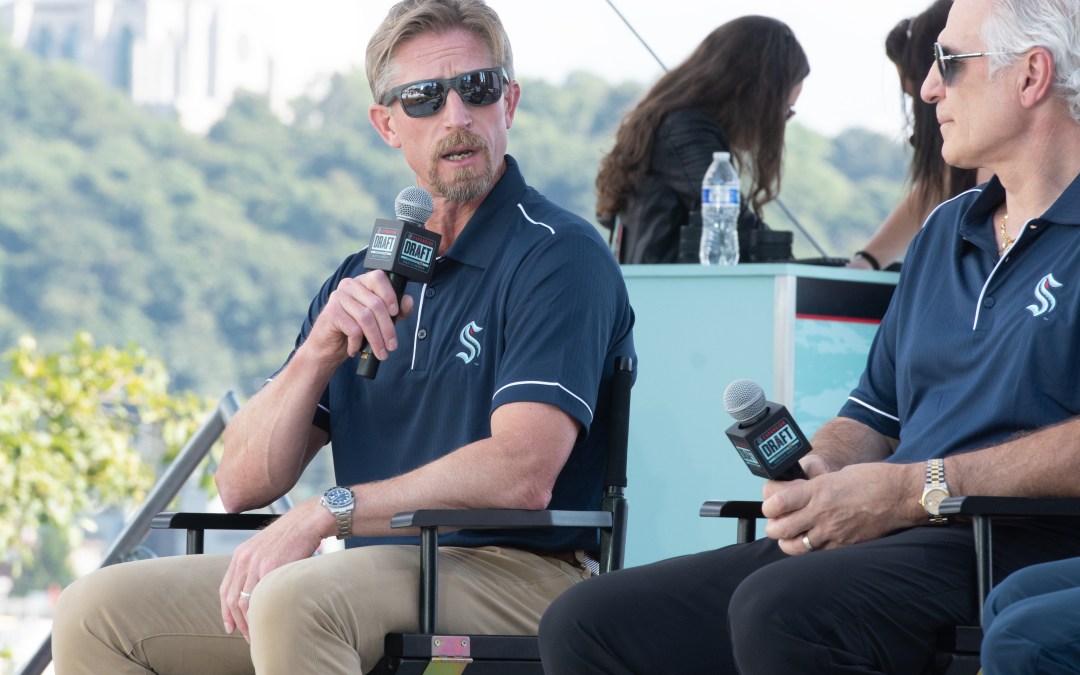 In part 5 of this series, I analyzed how the Kraken scheme transitions through the neutral zone and into their offense. As part of that piece, I noted that the Kraken prioritize, and have achieved, a strong volume of offensive zone entries this season. But the scheme, as implemented by this group of Kraken players, has frequently resulted in uncontrolled zone entries, where the Kraken are chasing to recover a loose puck.

In this part, I analyze how the team attempts to recover those pucks in the offensive zone, and/or immediately challenge opposing possession deep in the zone.

Hakstol’s philosophy: attack on the forecheck

As discussed in the last part, Hakstol’s neutral zone stretch pass scheme results in frequent tip in, uncontrolled offensive zone entries. And when carrying the puck through the neutral zone, Hakstol seemingly emphasizes that his players err on the side of a dump in into the offensive zone when under pressure. This approach slows the game down by limiting the opponent’s ability to rapidly counterattack off a neutral-zone turnover but leads to yet more uncontrolled entries.

This neutral zone scheme will not generate offensive success unless linked with a coordinated and committed offensive-zone puck retrieval scheme. Thus, it should come as no surprise that Hakstol and his staff have worked to make the forecheck a key part of the Kraken’s identity since the first day of training camp. The priority is to get the puck behind the opponent’s net, and as long as it’s there, pressure the puck aggressively with F1 and F2.

In the preseason, Hakstol noted the importance of the aggressive, attacking two-man forecheck as a driver of the offense: “It’s big to have good, strong fundamentals with (forward) one and (forward) two doing their job, then you’re looking for the payoff off that forecheck — that’s part of forechecking, getting the puck back in an opportunity to score.” What does it look like on the white board?

When forechecking in the offensive zone, the Kraken deploy their skaters in a 2-1-2 formation, with two forwards deepest in the zone, a forward in the center of the zone, in or near the slot, and the two defensemen high near the blue line. This formation is used in various situations.

First, the Kraken run an offensive zone set play off of their stretch pass scheme. The defenseman attempts to connect with F3 near the offensive blue line with a long pass, and F3 tips the puck into the zone as the other forwards, F1 and F2, carry momentum into the zone in pursuit of the puck. Both F1 and F2 will pursue all the way below the goal line to recover, while F3 moves into the slot to corral a centering pass and convert it immediately into a scoring chance.

In this clip, the Kraken deploy a variation of the standard set play described above. Adam Larsson connects with Calle Jarnkrok on a stretch pass, who deflects the puck into the offensive zone. Jaden Schwartz activates on the forecheck and is quickly below the goal line attempting recover the puck. Alex Wennberg (the other forward on the ice) is farther back on the play, so Jarnkrok decides to jump into the play below the goal line as the F2. Wennberg fills in as F3 in front of the net. The Kraken ultimately lose the puck battle and the Hurricanes clear the zone on this play.

Second, the Kraken default to two aggressive forecheckers and a 2-1-2 formation on standard uncontrolled dump-in plays.

In this clip, Wennberg is pressured at the blue line and doesn’t see an opportunity for a controlled entry, so he fires the puck in deep. Schwartz and Jarnkork pursue behind the net as F1 and F2. Again, Wennberg fills the slot as F3, but Schwartz seemingly anticipates that he’ll be closer to the net front and doesn’t connect on the pass. Again the Hurricanes clear the zone.

Third, and finally, the Kraken will use this 2-1-2 formation when there is a turnover, lost faceoff, or lost puck battle that results in possession for the opponent deep in the offensive zone (i.e., near or below the goal line).

In this clip, defenseman Jamie Oleksiak attempts to cycle the puck behind the net, but he turns the puck over to the Hurricanes. With the puck that deep in the zone, Jordan Eberle and Jared McCann immediately challenge in tandem. The Hurricanes are able to relieve pressure and clear the zone, however.

Note that when a turnover results in a clear, opponent possession, the Kraken will rapidly transition into their 1-2-2 neutral zone forechecking formation discussed in part 2.

The initial goal of the offensive zone forecheck is to recover possession after an uncontrolled zone entry. At this task, the Kraken have been relatively effective. Per analyst Corey Sznajder, the Kraken are above league average in converting dump ins into offensive zone possession, recovering more than one third of these types of zone entries. Those “fundamentals” Hakstol referenced are working.

Of course, the ultimate goal of the offensive zone forecheck is to generate scoring chances. Seattle has been highly efficient in converting recovered possession off of the forecheck into shots. Per Sznajder’s analytics, the Kraken have generated almost 12 shots per 60 minutes in this fashion, fifth most in the league.

Even so, the offense has struggled to produce generally. The Kraken do not generate a strong volume of rush opportunities with their neutral zone play. Their forechecking creates good shot volume, but as will be shown in the next part, the shots the Kraken are creating in the offensive zone typically are lower value shots from near the blue line. And the Kraken simply do not have the offensive finishing skill in their skater group to regularly convert mediocre opportunities into goals.

In part 7 of the series I examine the plays the Kraken deploy to generate scoring chances when in full possession in the offensive zone.