With trade rumors swirling, Mark Giordano out of Kraken lineup against Lightning 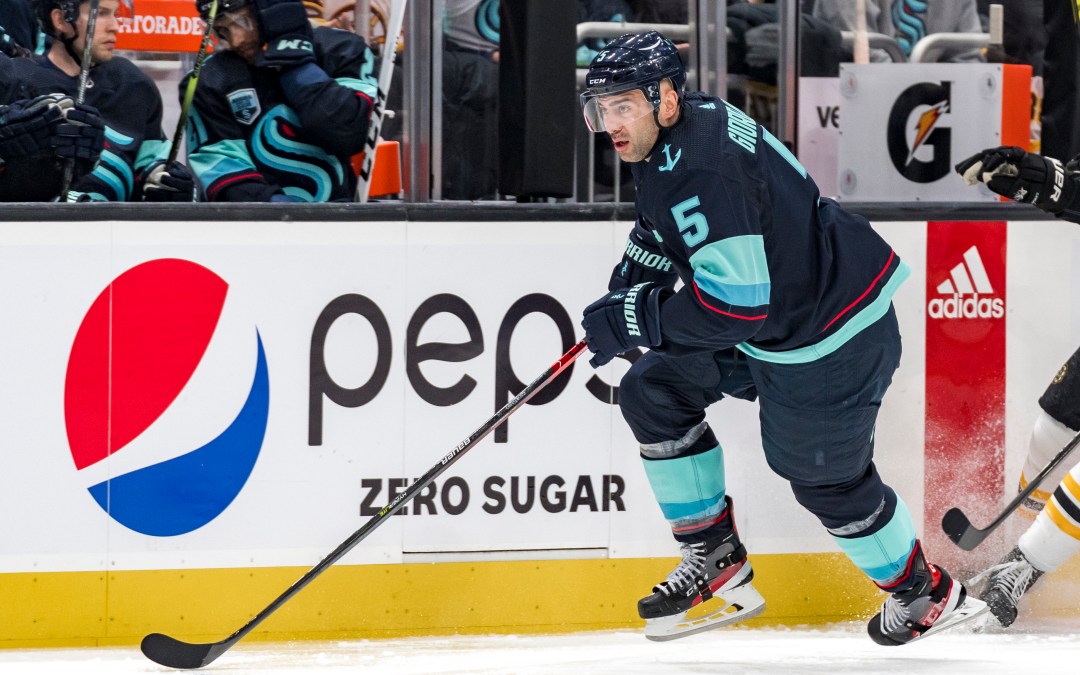 There is a line in The Dark Knight, where the Joker, played by Heath Ledger, holds up a gloved hand and in a very staccato rhythm, says, “And here… we… go.” Ledger delivers the memorable line just as chaos is about to strike Gotham City. That cinematic moment is the perfect representation of how Wednesday’s Seattle Kraken morning skate felt at Climate Pledge Arena, as the team prepared to take on the Tampa Bay Lightning.

After weeks of discussion about who could be traded out of Seattle prior to the March 21 NHL Trade Deadline, the Kraken took a page out of the Joker’s book and threw some gasoline on the speculation fire and will hold captain Mark Giordano out of the lineup for their game against the Lightning.

Is a Giordano trade imminent?

It’s no surprise that the 38-year-old former Norris Trophy winner could eventually be traded. With his expiring contract, Giordano is the Kraken player that has been most heavily cycled through the NHL rumor mill all season. Still, it felt like a real bombshell had gone off when coach Dave Hakstol confirmed Giordano would not play on a night when he was also set to be honored for recently playing in his 1,000th career game. We have since confirmed that the ceremony will go on as planned.

Historically, these kinds of moves to hold veteran players out of the lineup tend to happen only when a trade is imminent. So, one can only surmise from this decision that a deal to move Giordano is either in place or very close to being done.  It is our belief here at Sound Of Hockey that Giordano has played his last game as a member of the Kraken, but we shall see if that comes to fruition.

It’s funny to look back at Wednesday’s on-ice practice session and think about how a couple things played out. First, we thought it was interesting that Giordano was skating on a defensive pair with the oft-scratched Will Borgen, but we didn’t think much of it. We also thought it was a funny little moment when former Lightning Yanni Gourde tried to get Giordano to lead the team stretch at the end of the skate. But we again shrugged it off, especially since the Kraken are set to honor Giordano with a ceremony commemorating his 1,000th game on Wednesday night.

Ryan Donato was asked about Giordano, and he called the captain, “The epitome of what you want to be as a 1,000-game player.” Donato also said the trade deadline is unsurprisingly on players’ minds right now. “I think it’s a pretty sensitive subject, right? Like some guys are in certain positions. And you got to understand it’s a business and there’s a lot of different aspects of it. Guys have families here, there’s different things that are emotionally attached to it… It is hard not to think about it.”

On how to keep the players focused on the task at hand, Hakstol said, “There’s no easy way, I mean that’s real stuff. You’re dealing with real life. For Gio, it’s a real important night for him and his family, the celebration that we’re going to have before the game. From the standpoint of the reality of the business side of the game, there’s that conflict there. Those are real-life items.”

In retrospect, there was probably a little more to the on-ice moment between Gourde and Giordano than we realized. Depending on what happens in the next 24 hours or so, that could have been the last time Giordano skated with his Kraken teammates.

Jaden Schwartz not at morning skate

Jaden Schwartz did not participate in morning skate. SOH’s own Andy Eide asked Hakstol why he wasn’t there, and Hakstol simply said, “He wasn’t out there this morning.” So, as of the writing of this story, it is unclear if Schwartz’s absence means anything of significance.

Our guess is that it does not mean much. Joonas Donskoi, who is still officially listed on injured reserve, was a full participant in morning skate and took regular line rushes with Calle Jarnkrok and Jordan Eberle. However, Hakstol confirmed that Donskoi is still unavailable for the Kraken against the Lightning, so it would make sense that he was just serving as a placeholder on the top trio for Schwartz.

The non-explanation from Hakstol was a bit odd, but we caution you against reading too much into Schwartz’s absence.