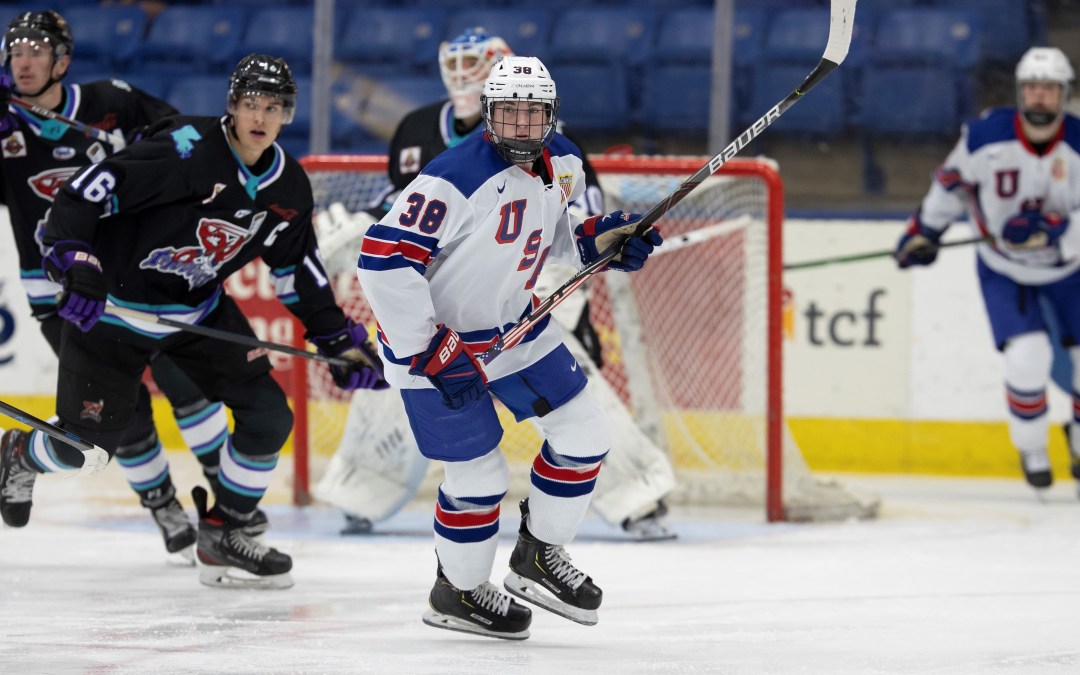 Logan Cooley was living out a dream this past winter. The 17-year-old from Pittsburgh made the United States World Junior Championship team and was in Alberta looking to help the Americans win a second straight gold medal. He played in one game before a COVID outbreak shut down the tournament and sent Cooley and his teammates home.

“It was shut down and it just was so horrible,” Cooley says about the cancelation. “Felt like the world was ending.”

The good news for Cooley is that after leaving the tournament he still gets to pull on a Team USA sweater. He’s in his second season playing for the U.S. National Team Development Program and has worked his way up the rankings to be one of the top prospects for the upcoming 2022 NHL Draft and depending on how the draft lotto balls fall, could be a player the Seattle Kraken take a long look at selecting.

As he rose up the charts, the scrutiny and attention has grown. Cooley is embracing it all so far.

“It’s been fun,” Cooley says. “I think sometimes you just have to enjoy it and not think of it as a job yet. I’m still a young kid playing hockey and it’s something I love. To get this much attention at such young age is not something a lot of kids could say so I’ve just been taking it day by day and just trying to enjoy it.”

While Cooley says he played a little bit of soccer growing up, hockey has always been his passion.

That passion was fueled by his family, which is the epitome of a hockey family. He has two brothers, Riley and Eric, who played at advanced levels of hockey. Riley played junior hockey, and Eric is currently playing for Ohio State. Cooley’s uncles, Tom Mooney and John Mooney, played college hockey at Notre Dame and Colorado College respectively before two pro minor league seasons.

Cooley was surrounded by hockey growing up and fell in love with the game.

After putting up large numbers in minor hockey, he got the call to play for the USNTDP at 16 and didn’t hesitate to jump aboard.

“You just realize how much it develops you as a player and as a person,” Cooley says. “It’s helped me grow my game so much and without the program, I actually don’t think I’d be where I’m at so far. Just seeing all the guys they produce and put in the NHL is pretty special and I’m hoping I can be another one.”

Cooley has committed to the University of Minnesota to play NCAA hockey next season. But he has a shot at playing in the NHL right away, so it remains possible the Gophers will only ever see him by buying a ticket.

What the scouts say about Logan Cooley

You don’t need to know who Cooley is ahead of watching his team play; he’ll stick out quickly. He’s an exciting player that can score and set up teammates after drawing defenders to him. Cooley is creative and highlight reel goals are the norm with him.

He’s also a top-end skater and is loaded with speed.

With the USNTDP he’s played 51 games with 26 goals, 49 assists, and 75 points. The U.S. team plays a USHL schedule and has also faced NCAA teams such as Notre Dame, Minnesota, and North Dakota.

“Those guys really pushed us to be at our best,” Cooley says about playing against older college players. “We had a lot of big wins against some really good teams.”

Outside of his speed and overall skating ability, scouts like the way he sees the ice, drives possession, and plays a two-way game. The latter, Cooley says is something that he’s worked hard to develop as he’s advanced.

As a young kid he rarely had to worry about defense since he was carrying the puck. As he started facing better competition, he knew he had to develop that part of his game.

“When I first came to the program, even like the first few games, I still really didn’t develop too much of the defensive side of the game,” he says. “But I think the last year and a half, it’s really helped me as I’ve grown my game, big time. That’s something that I’ve been for sure working on.”

He’s played against older players as he’s come up and is rated near the top of the draft by most rankings. He’s ranked as high as number two overall, and it would be shocking if he slipped past three.

Cooley also has an eye on playing in the NHL, year one.

“I think I have the skills, hockey IQ, and play-making abilities, stuff like that,” Cooley says. “But I think it’s just gonna come down to my physical strength. I’m not the tallest and strongest right now, but I think that comes with developing my body and I think once I can do that, and have a big summer, hopefully it could be in the conversation. Hopefully I can make the jump right away, that’d be pretty cool.”

Cooley has speed and skill, as displayed here with some elite-level stick handling and shooting. This backhand goal is as good as the move to get him in scoring position. The reaction of the defenseman after the goal says it all.

As creative a scorer as Cooley is, he sees the ice and is just as skilled dishing the puck as he is shooting it. Here he sets up a goal with a perfect no-look pass.

Cooley is tough with the puck as displayed here, as he draws a penalty after working through three University of Michigan defenders.

This clip shows how he can break down a defense in the offensive zone. He wheels around and draws the defense to him, which leaves a teammate wide open for a goal.