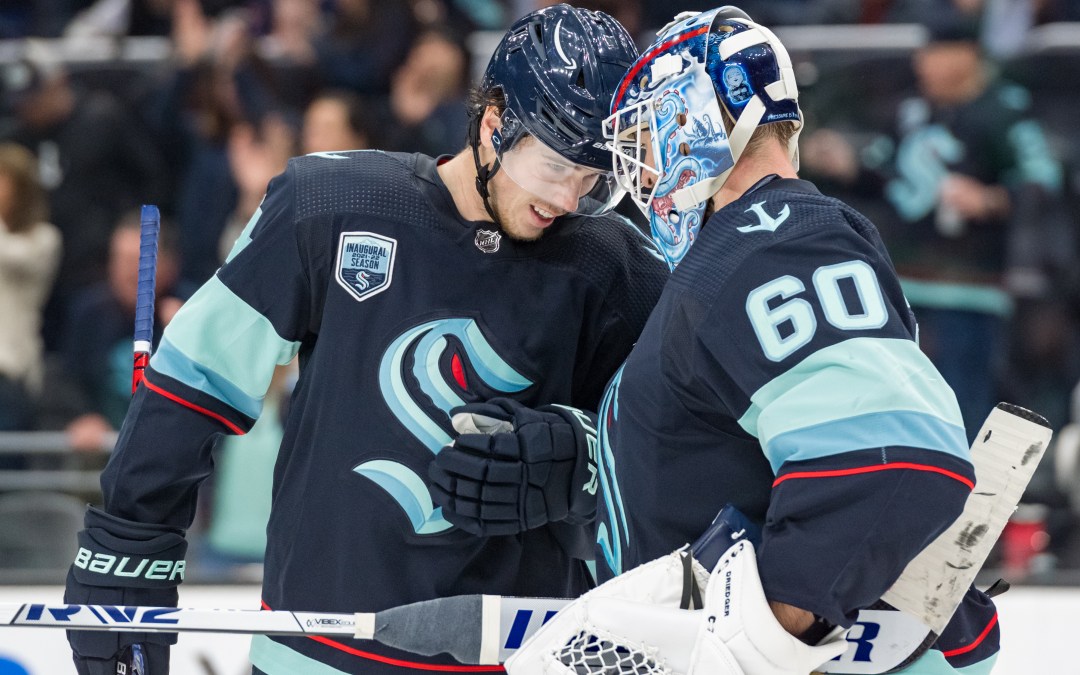 The Seattle Kraken were back at the Kraken Community Iceplex this week. After they wrapped up their first season Sunday in Winnipeg, it was time Monday and Tuesday to pack up their belongings from their lockers before heading back to their summer homes. Clean out day had a “last day of school” feel, although instead of making sure everyone got their yearbooks signed, the players met with the media and had exit interviews with general manager Ron Francis and coach Dave Hakstol.

“There are some underlying themes that we want to take advantage of over the summer and that we want to have the right mindset for coming back in training camp,” Hakstol said about the exit interviews. “But the majority of this time of year, two days after the end of the regular season, it’s a couple of key points for each individual that will likely lead to further conversation over the summer.”

While Hakstol wasn’t keen to share the details he discussed with certain players, there were noticeable themes from the players that met with the media.

To a man, there was a disappointment in how the season played out.

“It’s always mixed feelings,” defenseman Adam Larsson said. “We’ve had a long year emotionally and we didn’t get the result we wanted, so that was tough. But with that said, I think everybody has really enjoyed the time here and just seeing everything with the fans, how they pushed us for the whole year, even on tough stretches.”

Larsson’s last point about the fans was another theme that ran through the two days.

Despite the record and place in the standings, Kraken fans showed up all season. No matter what the score was, the building was packed and the fans were loud. It’s a remarkable connection between a city and a sports franchise.

It’s an easy pop for an athlete to praise the local fans, but it was so persuasive this week that you couldn’t help but feel the Kraken players were genuine in their appreciation they had for their fanbase.

“The biggest highlight for me is just, obviously, the fans,” Jordan Eberle said. “They were unbelievable. I don’t think I’ve played in front of a fanbase that just really got behind the team through wins and losses. That was the biggest thing. I mean, I’ve been at teams where fans have been amazing, but you lose and it goes the other way, and they didn’t do that here. I think they’re so excited to have a team, we want to try and win for them.”

Feelings of optimism for coming season

The team found some consistency over the second half of the season. There were still struggles, but the second-half improvement has the team feeling positive about what’s to come.

It’s easy to be optimistic days after the season ended. Seattle’s record is back to 0-0-0 and nobody is going to predict more losing.

But the Seattle players had some reason for that optimism.

Part of it was the way the team played over the later part of the season and that when they reconvene for training camp in September, they won’t have to spend as much time learning each other. There’s also the promise and expectation of roster improvements this summer from either trades or free agent acquisitions.

“I think every year you want to make the playoffs and that’s our goal.” Francis said. “Our goal is to get better each and every year. [From] starting the year to the end of the year we got better and we’ll continue that next year. It’s not an easy league but we certainly want to add the pieces we think will give us a chance to contend for the playoffs next year for sure.”

The arrival of rookie Matty Beniers also helps with the optimism.

Seattle’s first ever draft pick, taken second overall during the 2020 NHL Draft, arrived after the University of Michigan was eliminated at the NCAA Frozen Four. He played just ten games, but his impact was noticeable, and in a short time he scored nine points (3 goals, 6 assists) to start his career.

“I’m expecting a little bit more intensity next season going against guys,” Beniers said. “I think it was good to get my toes wet and see what kind of game it is, see how fast it is and the physicality of it and get a little confidence that I can play here and contribute to the team.”

Part of the second-half turnaround was the play of goalies Philipp Grubauer and Chris Driedger. The tandem struggled early to mesh with the system, and that led to some ugly goals against.

The consistency started to come together as the season went on, however, and if that trend can continue, the Kraken will have more confidence in the guys in net.

“I think after Christmas, that’s where we started to feel comfortable with each other,” Grubauer said. “It’s not just the defense. It’s the goalies too, it’s the forwards as well. It’s a whole team effort usually and we played some incredible games and obviously some games we need to improve, but I think next year the goal is to find that consistency.”

Grubauer and Driedger will have to find that consistency with a new goalie coach. Francis began his press conference by stating that Andrew Allen’s contract with the club would not be renewed beyond this season. The timing of the announcement was interesting because Allen had been spotted on the ice working with Grubauer earlier in the day. It also wasn’t entirely surprising, though, after the mixed results for the netminders that Allen oversaw this season.

Both goalies still have hockey to play this year, which is why Grubauer was on the ice with Allen and Larsson Tuesday. Grubauer will be heading to Finland to play for Germany in the IIHF World Championship, while Driedger will represent Team Canada. Both praised the other and got along but may have to face each other in international play this summer.

Kraken will add a top prospect

By finishing with the third worst record in the NHL, Seattle can do no worse than the fifth overall pick at the NHL Draft Lottery on May 10. That should yield another top prospect into the system.

“We acquired some draft capital,” Francis said of the team’s many moves at the NHL Trade Deadline. “So that gives us the opportunity to look at different things. Whether it’s moving picks for potential players and trades with teams that are up against the cap and it allows us maybe to parlay those picks and move up higher in the draft. Based on where we finished, we’re going to pick one through five and we might be able to get a guy in the draft that can step in and play in our lineup next year.”

Firebirds are a go

After splitting their AHL affiliate Charlotte Checkers with the Florida Panthers, Seattle will have its own affiliate next season with the Coachella Valley Firebirds. That means that Francis and the Kraken will have to fill all the coaching and support staff for that team to play next season.

Francis also indicated that because the Firebirds arena won’t be ready at the beginning of the AHL season, the team could start in Seattle. That could mean practices at the Kraken Community Iceplex and also some early games being played locally.

The Kraken are still working out the details on where those games would be played but they’re hoping it would be at Climate Pledge Arena.