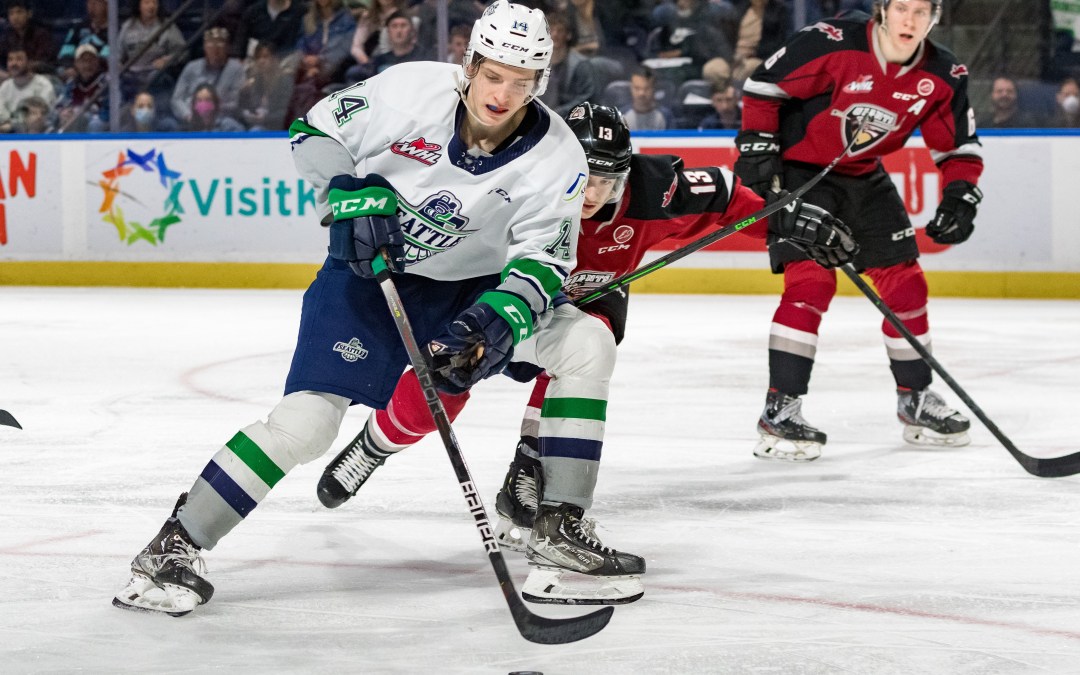 Kevin Korchinski picked the puck up at the half boards on a Seattle Thunderbirds power play during a January game against the rival Portland Wintherhawks. He thought about shooting but instead held on to the puck, stickhandled past a defender, and slung a shot from the slot. The puck made it through traffic and was tipped in by one of Korchinski’s teammates for a goal.

It just happened to be ‘Teddy Bear Toss’ night at the acesso Showare Center, an annual charity event were the fans throw stuffed toys onto the ice when the home team scores the first goal. As Korchinksi hugged his teammates, they found themselves in a shower of plush bears, lions, and other animals.

Korchinski’s play was subtle, but it allowed traffic to form in front of the net, and his shot was perfectly placed to allow his teammate to tip it in for a goal.

It’s that kind of offensive acumen that has landed the defenseman on the NHL Central Scouting list as an ‘A’ rated prospect for the 2022 NHL Draft. Korchinski, 17, is the highest-rated prospect from the U.S. Division and is one of the Western Hockey League’s best defensemen.

“I’m excited about my game,” Korchinski says. “It’s improved at both ends and I think I’m more confident. The stuff in the offseason paid off, and I’m kind of seeing the work get rewarded, so it’s been awesome.”

Seattle selected the 6-foot-2 defenseman with the 10th overall pick during the 2019 WHL Bantam Draft and this year he’s a big reason the Thunderbirds are having a resurgent season. Korchinski runs the offense, mans the power play, and logs top minutes for Seattle, which is looking to make a long playoff run this spring.

He benefited from the COVID-shortened WHL schedule last year. With a young roster and no playoffs to worry about, the Thunderbirds gave Korchinski more ice time in elevated situations that a 16-year-old rookie might not normally get.

“It really helped me kind of see the pace of the league,” Korchinski says. “Get to know the guys and just kind of see what I had done offseason and the work I had to put in heading to this year.”

Korchinski is projected to be a prospect that hears his name called sometime in the mid-first round to mid-second round in July.

Nobody is going to confuse Korchinski for a throwback, stay-at-home defenseman. He is every bit the modern defenseman who is an offensive threat, can skate, and move the puck with the best of them.

He’s a power-play quarterback and through 61 games with the Thunderbirds this season he has four goals and 51 assists – 24 of which have come on the power play.

“Definitely my skating, my puck moving ability and just my offensive instincts,” he says, self-scouting his strengths. “I’m always trying to create offense and always trying to put the puck in the back of the net, whether it’s a pass or shot.”

Korchinski’s game has drawn a lot of comparisons to Vegas Golden Knights defenseman Shea Theodore. Those that have seen them both play feel that they have similar skating ability and can take the puck from coast to coast. Theodore looked to score more while Korchinski is happy to set up teammates.

Those comparisons have made it back to Korchinski and he’s just fine with it.

“Yeah, I’ve heard that a lot,” he says. “Being compared to guy like that, it’s unbelievable. He’s one of my favorite players. He’s unbelievable. And just being an ex-Thunderbird, it’s really cool.”

By comparison, Theodore scored 19 goals, 31 assists, for 50 points in 71 games during his draft year with Seattle.

Korchinski is not only looking to hear his name called by an NHL team this summer but wistfully looks at the potential of some day representing Canada at the World Junior Championship, something he certainly is on pace to be in the mix for.

One player on the gold medal winning Team Canada that season in Montreal? Theodore.

Like most junior defensemen, Korchinski knows that he has to continue to work on his strength. He says that is the offseason plan, but for now, he wants to help the Thunderbirds go as far as they can in the postseason.

On this play, Korchinski shows off his skating, stickhandling, and vision as he circles the zone and finds a wide-open teammate on the doorstep for an easy tap in goal.

It’s not all offensive play however. Here, Korchinski retrieves the puck, gets away from two forecheckers and gets the puck up the ice and out of his own zone.

Korchinski controls the play and can make even-strength play look like a Seattle power play. Here he reads the ice and makes a perfect pass for a goal.

In this clip, he calls for the puck, gets it, walks the blue line to create a lane and shoots. His shot is deflected and Seattle scores on a rebound.