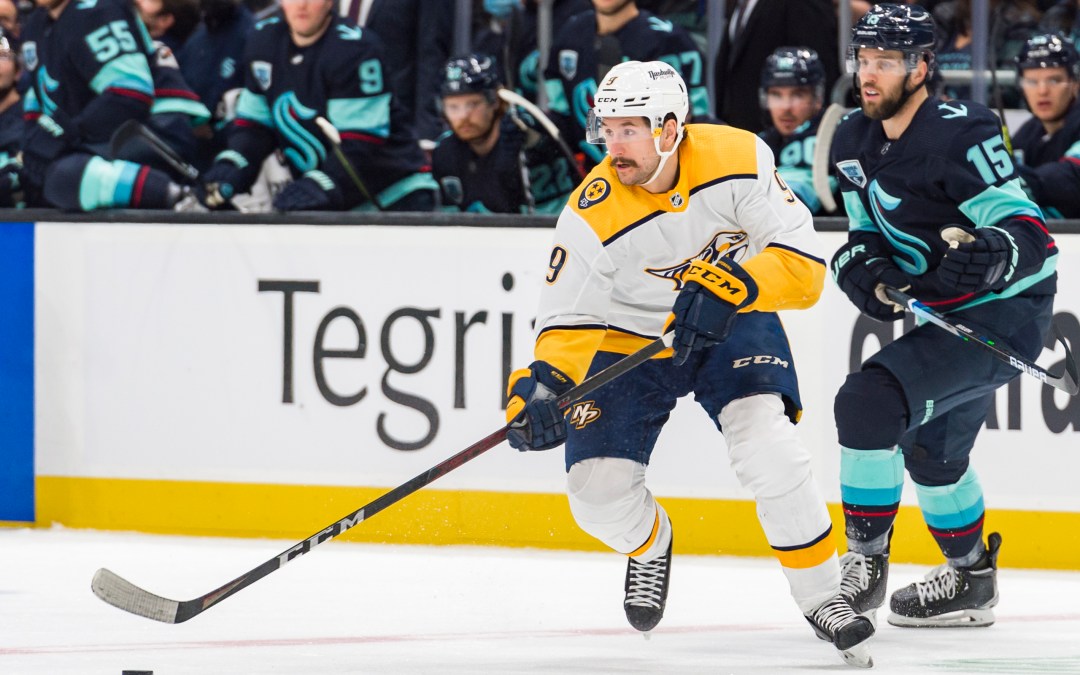 The NHL Entry Draft was fun, but even outside of that, this has been a very busy week around the NHL, with lots more excitement to come in the next few days. On this edition of Weekly One-Timers, we will take a look at several of the storylines that have been written this week and try to connect them to the Kraken. Oh, and we will give you some Kraken news, obvi.

Sit back, relax, and enjoy your One-Timers.

Perhaps this is hyperbole, but we think Seattle’s performance at Thursday and Friday’s draft could go down as one of those “huge moments in Kraken history” when we look back at it five or 10 years from now. We’ve had oodles of draft coverage on soundofhockey.com, so we won’t break it down too much more here, but we do want to say that we’re still in awe of the fact that Shane Wright dropped to Seattle at No. 4 overall.

Lump in Wright and other newly drafted players (like Jagger Firkus, David Goyette, Jani Nyman, et al) with last year’s picks (especially Matty Beniers, Ryker Evans, and Ryan Winterton), and the future of the Kraken is suddenly much brighter than it was just a few days ago.

The expanded Kraken prospect pool will be on full display for the team’s development camp at Kraken Community Iceplex starting Monday.

All sessions are open to the public, so swing by and be dazzled by Wright.

Filip Forsberg back to Nashville

Kraken general manager Ron Francis has indicated he intends to be aggressive in signing players that can rapidly improve his team when free agency opens on July 13. It’s debatable if now is the right time for this franchise to take swings at big-name, big-dollar players, but if Seattle is going to do that anyway, Filip Forsberg would have been our top target.

Instead, the 27-year-old star winger re-signed with the Predators for eight years at an $8.5 million cap hit on Saturday. That’s a fair deal for a guy that scored 84 points in 69 games last season, including this coast-to-coast banger against Seattle in January.

With Forsberg off the board, all eyes turn to players like Johnny Gaudreau, Nazem Kadri, and John Klingberg, who are expected to be available as of Wednesday. The Kraken are one of just a few teams with the cap space to sign big-time free agents… But should they?

The Chicago Blackhawks have made it clear they intend to be one of the worst teams in the league next season, with hopes of winning the NHL Draft Lottery and a chance to select generational talent Connor Bedard in the 2023 draft.

They jumpstarted their chances of being terrible by trading away Alex DeBrincat and Kirby Dach at the draft, getting back five picks in total, including the No. 7 pick (Kevin Korchinski) and the No. 13 pick (Frank Nazar).

The returns were underwhelming, and the deals made us wonder what the plans are for veterans Patrick Kane and Jonathan Toews, who surely must be reaching the ends of their respective ropes.

We also wonder if Seattle inquired about DeBrincat, but the closest thing to a No. 7 pick that Francis could have given up would have been the No. 4 pick, which ultimately became Wright. So, we’re glad that didn’t happen.

With Chris Driedger expected to miss most of the season with an ACL injury, Seattle is likely looking for a veteran backup to Philipp Grubauer. Since Driedger is under contract through 2023-24, our expectation is that the Kraken will want to find somebody reliable that will accept a one-year deal.

Scott Wedgewood and Casey DeSmith—two potential targets that could have fit that mold—re-signed with Dallas and Pittsburgh respectively, each on two-year deals. With those signings in mind, what level of quality can Seattle expect to find for just one year?

Additionally, Alexandar Georgiev was traded to Colorado, Ville Husso was traded to Detroit, former Kraken legend Vitek Vanecek was traded to New Jersey (the day before his wedding), and Marc-Andre Fleury went back to Minnesota. The MAF signing has apparently made Cam Talbot mad, but even if Talbot’s agent somehow talks Bill Guerin into trading him, there isn’t a fit for Talbot in Seattle.

So, who is left for the Kraken? We thought perhaps Braden Holtby, but there are reports out there that he may not play this season. We will discuss the backup goalie topic through a Kraken lens in more detail soon.

Kris Letang re-signed with the Pittsburgh Penguins for six years with a $6.1 million AAV. That’s a big contract for a 35-year-old defenseman. Some folks thought he was a fit for Seattle, but we’re glad the Kraken didn’t somehow end up making a deal like this for a player of this age.

Duncan Keith announced he will retire after 17 seasons. The two-time Norris Trophy winner notched 106 goals and 540 assists in 1,256 career games, and helped lead the Blackhawks to three Stanley Cups.

Bryan Marchment, a long-time NHLer and father of Panthers forward Mason Marchment, passed away suddenly and unexpectedly in Montreal, where he was traveling with the San Jose Sharks for the draft. New Sharks GM Mike Grier gave a nice statement about Marchment prior to San Jose’s first pick on Thursday. Our condolences to the Marchment family.

Minnesota Wild star Kirill Kaprizov could be in a bad situation in Russia. Read Michael Russo’s story in The Athletic for details, but there are rumors that he is wanted in his home country for allegedly purchasing a fake military ID. It is currently unclear if he will be allowed to return to the United States for next season.