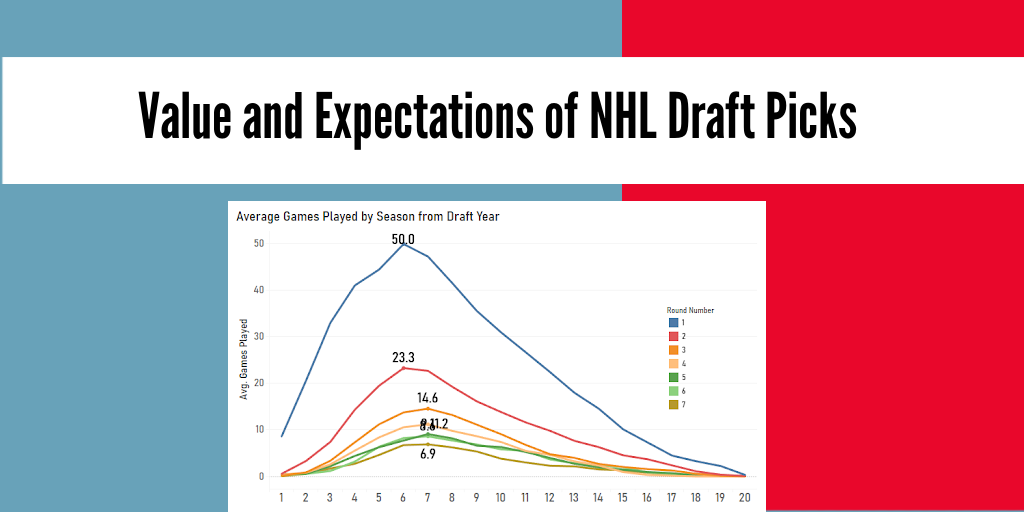 As the Seattle Kraken wind down their inaugural season in the NHL, fans will undoubtedly start to turn their attention to the 2022 NHL Entry Draft. The Kraken were very active during their first NHL trade deadline in the middle of March when they made six trades that returned 10 draft picks over the next three years. Combined with three draft picks they accumulated before the start of the 2021-22 season, plus the standard seven picks per year that all teams get, the Kraken will have 34 picks over the next three NHL Entry Drafts.

Seattle also has the second most picks in the upcoming 2022 NHL Entry Draft with 12 picks.

To help better understand the value of those draft picks, we are going to spend some time framing how these picks translate to NHL players and when we might expect some of them to make it to the NHL. For the purposes of this analysis, we are excluding goalies from the data. Goalies have a very different timeline on their path to the NHL and will be the subject of a future story.

Long-term outlook by draft round

Every player’s path to the NHL is different, and some take longer to develop into regular NHL players. So it is not just about when they break into the league, but what they do when they get there. We will be using ‘games played’ as the metric to assess the long-term contributions of draft picks. Of course, there are other ways to evaluate a player’s ability and contribution, but for now, this metric will let us keep it simple.

Here is a look at the games played by draft round for players drafted from 2010 to 2017.

This chart signifies the importance and value of first-round draft picks as almost sure things to make the NHL. Returns for players selected in the second round tend to drop off quite a bit, as 28 percent have yet to play an NHL game. The steeper drop comes in the third round where close to 50 percent of the players have not and might not ever play in the NHL.

It is important to note that the data could be understating expectations since several players are still active and will continue to accumulate games played as their career continues. For example, Kraken forward Kole Lind was drafted by the Vancouver Canucks in the second round of the 2017 draft. He has only played in 20 career NHL games and is poised to be a regular in Seattle’s lineup next year.

It is not a perfect projection, but directionally, we feel this is a good indicator on setting the expectations for eventual returns from draft picks.

This also does not mean that players taken later than the third round are useless. Johnny Gaudreau, Jean-Gabriel Pageau, and Jaccob Slavin were all fourth-round picks that have played over 300 games in the NHL. The chart should just drive the point home that the more picks you have, even in the later rounds, the better your odds that you may find the next John Klingberg (fifth round), Brendan Gallagher (fifth), or Mark Stone (sixth).

It is also important to evaluate when we should expect a drafted player in the NHL. It is rare that we will see players drafted in the summer and then playing in the NHL the following season. In fact, there are usually fewer than five players drafted that play more than 25 games the very next season.

Here is a look at the players that made the jump to the NHL immediately after their draft year.

Based on this information, it is safe to assume that we will not be seeing any of the Kraken’s four second-round draft picks playing in Seattle next season. But the question is, when can we expect them to play in the NHL?

We looked at when players “make it” in the NHL by determining when a player plays his first 25-plus-game season in relation to his draft year.

This should temper some expectations on when we will see the likes of Ryker Evans (second-round selection in 2021) and all the other future second-round draft picks putting on the Kraken jersey.

There is a general feeling in the hockey world that Ron Francis drafts well. Sebastian Aho and Jaccob Slavin are often the poster boys for this belief in Francis’ drafting abilities, but how does he do across all draft rounds compared to his peers?

If we isolate the Carolina Hurricanes draft picks while Francis was the general manager, we can compare his drafted players with the rest of the league in that same timeframe.

It is also worth noting that two of Francis’ picks are about to jump tiers. Both Jake Bean (first round, 2016) and Morgan Geekie (third round, 2017) are expected to bump into the 101 to 200 games tier this week.

Francis’ track record is solid, and the early evaluations of the Kraken draft picks selected last summer have been encouraging. Kraken fans should also feel good about the bounty of picks accumulated at the trade deadline, but remember that it can take time for players selected to become regulars in the NHL.