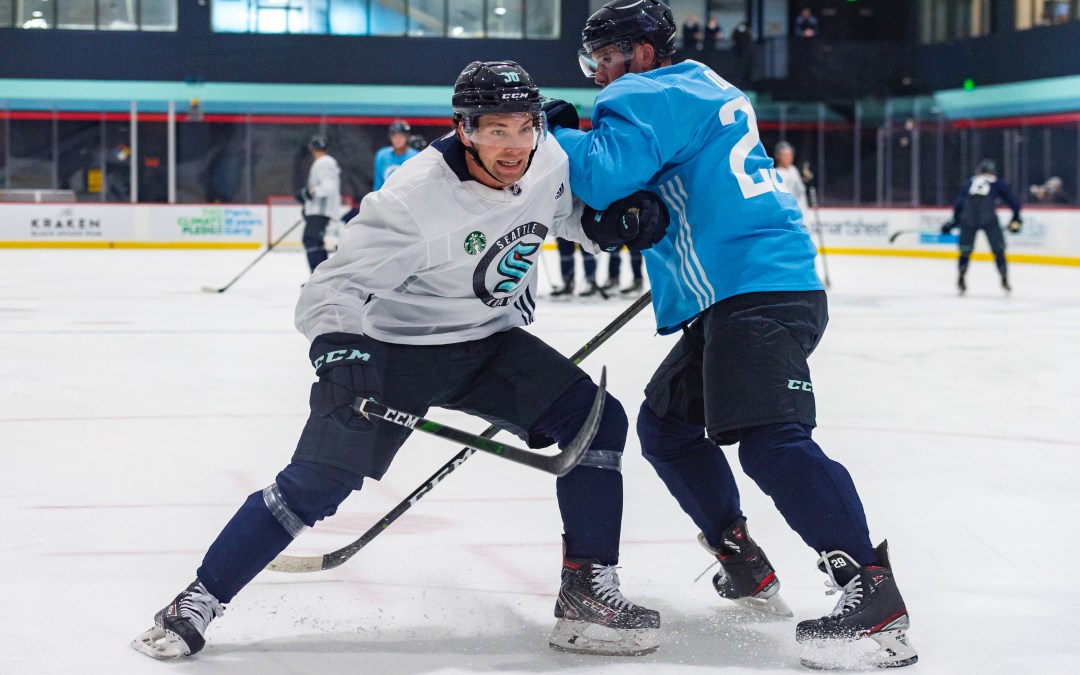 Later, the two would play together.

“Out there being a D partner with him, it’s surreal,” Evans, 19, said. “I was just soaking it in and learning off of him.”

Learning is the reason Evans is at training camp with the Kraken.

Seattle selected the defenseman during the second round, with pick No. 35, of July’s NHL Entry Draft. Playing in training camp is a valuable experience for Evans as he prepares for his final year in junior hockey with the Western Hockey League’s Regina Pats.

“It’s been cool so far,” Evans said. “Just kind of soaking everything in, learning from those older guys. It’s a good pace out there. It was competitive and obviously that’s what makes it fun.”

With Regina last season, Evans led all WHL defensemen in assists with 25 in 24 games. He is poised for another big year with the Pats once he is inevitably sent back by the Kraken.

While he’s practicing against players that are bigger, stronger, faster, and more experienced than he is, this is not completely new territory.

“In the summer we skate with a lot of those pro guys so it’s not too big of an adjustment,” Evans said. “But you’ve just got to give them a bit more respect because they know what to do.”

Evans played half the season last year with budding hockey superstar Connor Bedard. The 15-year-old Bedard was the first player to be granted exceptional status in the WHL, which allowed him to play a year earlier than every other player. He responded by leading the league in scoring until he left to play for Canada in the U18’s where he would set more scoring records.

Seattle’s scouts liked the fact that Evans meshed with Bedard. Playing with superstar players isn’t easy, and not only did Evans see the game in a similar fashion as Bedard did, he had more assists and points after Bedard left for the U18’s.

“He’s obviously a great player and it just came across easily,” Evans said. “We’re both offensive guys and just reading off each other we had a great team and a lot of success.”

For the rest of camp Evans is going to take in every moment, learn from the pros, and go back to Regina to finish his junior career off with a run he hopes will lead to a championship.

He isn’t the only 2021 Kraken draft pick in training camp this week. Third-round pick Ryan Winterton and fifth-round pick Jacob Melanson are soaking up the action with Evans.

Battle drills and a hard day

The intensity of camp picked up a notch Friday as the Kraken took part in a number of battle drills that included one-on-one action, defensive zone work, and more hitting.

“It was more competitive,” Kraken head coach Dave Hakstol said. “But, you know, there was still a combination of systems and teaching within it.”

There was some hitting, more players knocked to the ice, and at one point Morgan Geekie and Giordano got tangled and crashed into goalie Philipp Grubauer in a moment that got everyone’s attention. All three skated away unscathed.

Going hard against teammates can be tough, but the Kraken managed through without any bad blood bubbling to the surface. The play was hard, it was intense, and it showcased the competitive nature and style the team possesses.

“There’s a boundary that you have to have, and maybe other teams or other camps, you see some fights or whatever, but you don’t want to expect that,” defenseman Vince Dunn said about the Kraken remaining calm. “But, at the same time there’s guys that need to solidify certain roles.”

The ramped up intensity of Friday’s training camp sessions were possible thanks to the work put in during the first day. A great deal of day one was spent on systems and because the team was comfortable, they could add the physical aspects to those systems.

Don’t expect the club to go backwards moving forward, as it’s safe to say that intensity will only rise from here on out.

“I mean we’ve been skating together for a couple of weeks,” defenseman Jamie Oleksiak said. “A lot of us [have], and it’s been a lot of scrimmaging and obviously not too physical. And now that we have a system, we kind of know what we’re doing in the D zone and we can ramp it up a little bit more and play a little more structured. So, I think it’s been a good camp so far and you know we just got to keep up that mentality moving forward.”

A top line may be emerging

Hakstol made a point Thursday of pumping the breaks on lines but did hint that they are beginning to put some combinations together to see how they mesh.

“I want to try to give most of the combinations that we’re starting with an opportunity,” Hakstol said Friday. “Not just one day at a time, that’s not enough to see the ups and downs. So, we’re trying to give each and every combination… a few days together, and maybe one or two exhibition games to really see how it comes together.”

For the second day, Jared McCann was centered between wingers Jordan Eberle and Jaden Schwartz. They played well and showed some chemistry, especially between the two wingers.

On Thursday, Eberle spoke on the connection the two have off the ice thanks to growing up near each other and common connections through their respective brothers. Schwartz echoed those connections on Friday.

“A lot of familiarity there and a really, really smart hockey player ever since he was young,” Schwartz added. “[Eberle is] skilled and sees the ice well, always knows where guys are and always finds a way to get to those open areas so just an easy guy to read off of when he has the puck.”

Biggest laugh of the day

During the morning session the team went through one-on-one battles in the offensive zone.

At one point Haydn Fleury’s stick got in the feet of Adam Larsson’s skates, dropping him to the ice. It was a clear trip.

Despite no refs on the ice, the penalty was still called as the remainder of the team yelled, raised arms, and called tripping.

The Kraken will be back on the ice at training camp Saturday as the team will play a full scrimmage in preparation for Sunday’s preseason opener in Spokane against the Vancouver Canucks.