The Departed – checking in on former Seattle Kraken players 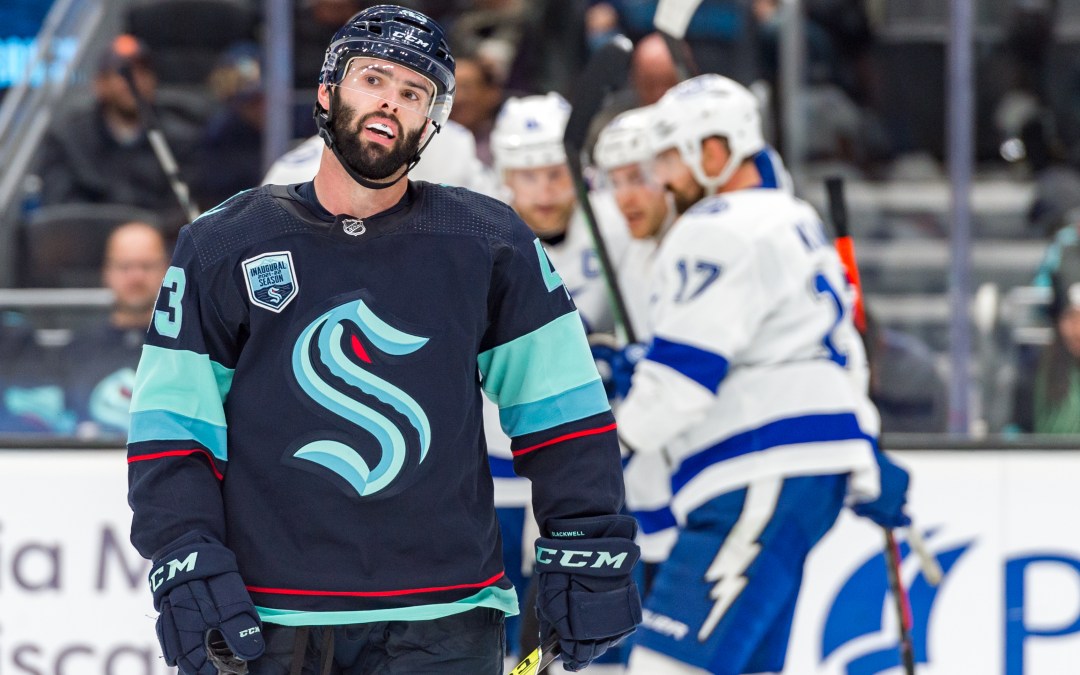 At the end of the inaugural season for the Seattle Kraken, the team’s roster looked very different from how it looked in Oct., 2021, when the team played its first game. General manager Ron Francis was active at the NHL Trade Deadline, and he shed six regular players to (mostly) contending teams in exchange for a bevy of draft picks. Now, with one round of the playoffs in the rearview and the second round underway, we felt it was time to check in on former Kraken players to see how they fared after being dealt.

We will ease you into it with a check-in on Mason Appleton. Appleton’s time in Seattle was underwhelming. He just never seemed to find his footing with the team and ended up getting traded back to the club from which he was plucked in the Expansion Draft. After scoring six goals and 11 assists for Seattle in 49 games, the 26-year-old forward returned to the Winnipeg Jets and amassed just four more points in the final 19 games of the season.

The Jets did not qualify for the playoffs, and Appleton’s contract is now up. He is a restricted free agent and has arbitration rights. It wasn’t much of a return, but we thought at the deadline that a fourth-round pick was fair, and this still seems accurate.

The second-round pick that Francis got for Jeremy Lauzon raised some eye brows when the transaction went through. Lauzon (somewhat unfairly) drew the ire of a lot of Kraken fans when he was in Seattle, thanks to some early-season defensive struggles. He improved as the season went on, but we still recall seeing some surprised reactions that he fetched a second-round pick on the trade market.

With his new team, the Nashville Predators, Lauzon injured his leg on April 16 against Chicago and missed the last seven games of the regular season and Game 1 of the team’s series against Colorado. He returned to play Games 2, 3, and 4, which was just long enough to feel the full wrath of the Avalanche, who swept the Preds and sent them home with a whimper.

Lauzon had no points in his three playoff games, was minus three, and averaged a little under 17 minutes of ice time. He had one goal and one assist for Nashville in 13 games of regular-season play. Lauzon is a restricted free agent with arbitration rights this offseason.

The return that Francis got for Lauzon looks even better with Nashville’s early exit, as Seattle will select No. 49 overall with that pick.

Some (but not all) of us felt a little bad for the Maple Leafs after they lost to the two-time defending Stanley Cup champions in seven games in the first round. The hot takes about Toronto’s continuing postseason failures were running rampant, but thankfully the bulk of the disdain did not seem to be directed at Mark Giordano or Colin Blackwell.

Giordano and Blackwell were two players who performed well during their respective tenures in Seattle, and they were two of the most affable guys in the organization when dealing with the media, which we certainly appreciated.

So, we were sad to see both of them go and were quietly hoping to see them succeed. But, the Leafs decided to make like trees and… leave… early in the postseason yet again.

Giordano played a big role on the blue line for Toronto and logged at least 18 minutes per night against the Lightning. He registered assists in Games 5 and 6, but was otherwise held off the scoresheet. In 20 regular season games for his hometown team, Gio had two goals and 10 assists after posting 23 points for Seattle.

As for Blackwell, the grinding forward predictably played a depth role after leaving the Kraken. He added just three regular-season points, plus one goal and one assist in the playoffs.

What happens for these players now? Both are on expiring contracts and are set to become unrestricted free agents this summer. Giordano is 38 years old, but never gave any indication he was ready to hang it up. Blackwell is 29 and can bring value to a third- or fourth-line role. Maybe Seattle will try to get him back?

Marcus Johansson was a pleasant surprise as a Kraken player. Signed to a one-year deal late last offseason, we had low expectations for the veteran forward. But he ended up playing a huge role for Seattle, typically in a top-six spot, and serving as the bumper on the power play most nights.

Johansson was traded to one of his old teams, the Washington Capitals, at the deadline and had three goals and three assists in the regular season after the move. He then added one goal and one assist in Washington’s six-game loss to the Florida Panthers.

Johansson is also a UFA and has played for six different teams since the 2018-19 season. He’s still just 31 years old, though, so he will surely be looking for a multi-year deal.

Of the players traded away at the deadline, Calle Jarnkrok is the lone player on a team that survived the first round. His Flames defeated the Dallas Stars in a thrilling Game 7 that went to overtime, and Calgary now moves on to a much-anticipated Battle of Alberta in the conference semifinals.

Jarnkrok had an interesting season for Seattle. He was sick with COVID, then injured, then injured again, and got off to a horrible start as a result. Once finally healthy, he turned it on and ended up having a solid campaign with 12 goals and 14 assists in 49 games for the Kraken.

Since moving to Calgary, Jarnkrok hasn’t produced much offensively. He has yet to score a goal for the Flames in the regular season or playoffs, and had just five total assists with one of those coming in the Dallas playoff series.

Jarnkrok’s underlying numbers have been good, and coach Darryl Sutter has been using him regularly in a checking role.

Jarnkrok, 30, is an unrestricted free agent too following his playoff run.