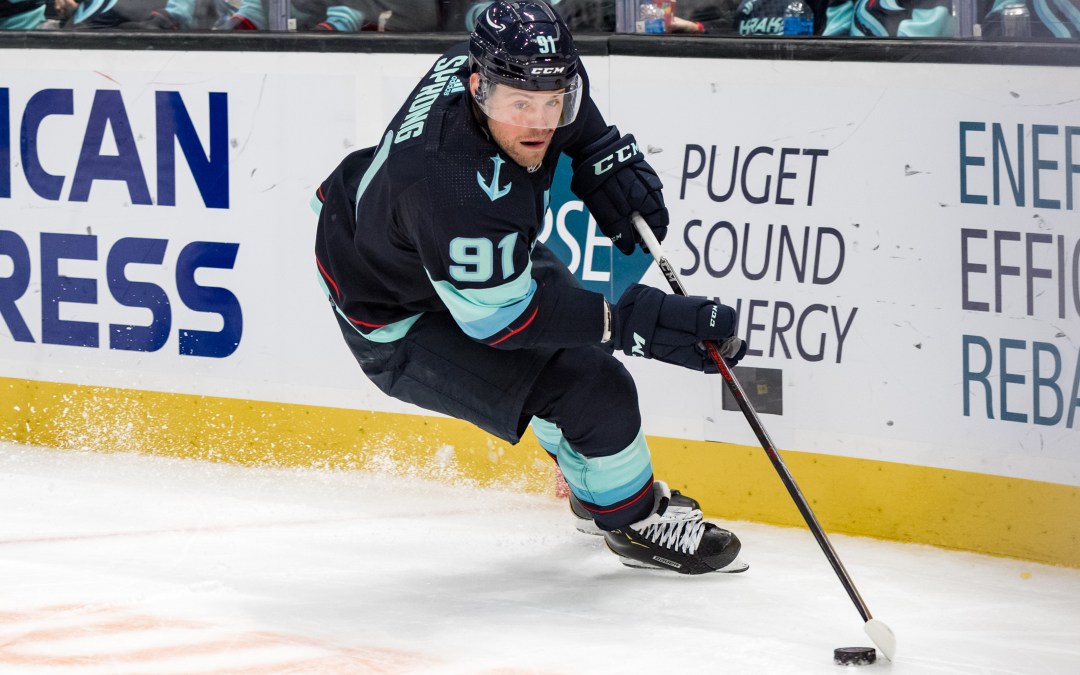 At the NHL Trade Deadline, the Sound Of Hockey panel provided instant reactions to Seattle’s trades. And earlier in the playoffs, Darren Brown updated the progress of the departed Kraken. But with the playoff runs of all of the Kraken’s trade partners now at a close (Calle Jarnkrok was the last to go out when his Flames lost in the second round), it’s a good time to pick some winners and losers from Seattle’s first trade deadline.

We wanted to go beyond the obvious question of “Which team won each trade?” and also consider how the individual players fared after being moved. So we’ll start with the player and team we thought did best and work our way down from there.

Mason Appleton – For whatever reason, Appleton’s tenure was one of the bigger disappointments of Seattle’s inaugural season. Between injuries and poor play, he did not seem to find his stride until the very end of the campaign when he paired up with Yanni Gourde just before the deadline.

Appleton is a restricted free agent and likely has one more year before unrestricted free agency (unless Winnipeg signs him for longer), so he needs to produce now. And he was productive in his previous stint with the Jets. We are confident that Appleton welcomed this deal back to Manitoba both professionally and personally.

Winnipeg Jets – Appleton was an ascending power forward for the Jets before the Kraken plucked him in the Expansion Draft. Even so, Winnipeg was able to reacquire Appleton from the Kraken for a negligible cost–a 2023 fourth-round pick. Coming off a down season, Appleton should be relatively cheap for Winnipeg to re-sign, and the player should have every incentive to produce. Winnipeg did well in this deal.

From the Kraken perspective, it remains a head scratcher deal for us. Appleton’s play was trending up before the deadline. One would imagine he may have had more value in an offseason trade package if he continued to perform. Instead, the team sold low on a pending RFA, so something does not quite compute. Clearly, Seattle had seen enough to know Appleton wasn’t part of the long-term plan.

Seattle Kraken – Setting aside the Appleton deal, the Kraken did well converting bottom-pair defenseman Jeremy Lauzon and a host of pending unrestricted free agents–all of whom may very well have simply signed elsewhere anyway–into valuable draft capital as the team looks to build a prospect pipeline from scratch. The picks acquired at the deadline look like this:

The 2022 draft picks alone carry significant value. One could reasonably expect those picks to yield a solid NHL player. Particularly if the future picks bring another contributor, that’s a good outcome at the trade deadline when you’re out of contention.

Mark Giordano – A leader with the Kraken to the end, he reportedly told Ron Francis that he would not block any trade. Even still, the Kraken directed him back to his hometown, and probable preferred destination, in Toronto. Giordano apparently has appreciated his fit with the Leafs so much that he gave up the chance at a larger payday to stick around Toronto for two more seasons at just $800,000 per season. He seems content to chase a Stanley Cup in a situation he likes, so that makes him a trade deadline winner.

Marcus Johansson – It’s good to be wanted, and JoJo was able to leverage a decent bounce back season with the Kraken into a playoff role with a better team. That kind of exposure should help, even if only slightly, as he looks for a new contract as an unrestricted free agent this summer–whether with the Capitals or elsewhere.

Toronto Maple Leafs – One could argue Toronto should be in the winners category. The Maple Leafs obtained Mark Giordano, a solid top-four capable blueliner, and convinced him to stay on a very team-friendly contract for two more seasons, all without giving up a first-round draft pick. The team-friendly extension is invaluable for Toronto as it looks to navigate through a cap crunch caused by committing $64 million of the $82 million salary cap to just eight players.

On the other hand, it’s difficult to give the team full marks when it conceded two second-round picks and a third-round pick for the privilege of again bowing out in the first round of the Stanley Cup Playoffs. And Toronto’s draft cupboard is looking fairly barren at this point.

Jeremy Lauzon – The 25-year-old defenseman is still a work in progress. That said, he had the confidence of the coaching staff in Seattle and received regular bottom-four minutes along the blue line. It seemed like an ideal situation for him to hit his ceiling as a player. It’s hard to know whether the staff in Nashville will give him quite the same role.

On the other hand, Nashville handed over a valuable draft pick for the pending restricted free agent. To justify the move, the Predators will likely need to give Lauzon a reasonable contract and real ice time next year. So, for Lauzon, this probably qualifies as either a neutral or a “too-early-to-tell” move.

Calle Jarnkrok – He said the right things; but we got the sense that if there was a chance to move onto a contender at the deadline, Jarnkork would welcome the opportunity after his frustrating–though not unproductive–run in Seattle. Not only did he get that chance, he landed in what was likely his most preferred destination, playing with his cousin Elias Lindholm in Calgary. And he got to play through a couple rounds of the Stanley Cup Playoffs.

On the other hand, the production just wasn’t there. He scored just one goal in 29 games as a Flame. (He was stuck on zero goals for the first 28 games, but finally scored on the night Edmonton won the Battle of Alberta.) He also wasn’t able to gain the confidence of head coach Daryl Sutter to contribute in critical situations, like on the penalty kill. Thus, it strikes us as unlikely that Calgary will pay to keep Jarnkrok off the market, meaning he’ll go to unrestricted free agency coming off a down stretch. He may have been better served continuing to produce in Seattle.

Colin Blackwell – Similar to Calle Jarnkrok, Blackwell had a productive run after a challenging start in Seattle, with eight goals and nine assists in 37 games. After the trade to Toronto he settled into a fourth-line role–averaging 10:48 in ice time in 19 regular season games and just 7:12 in ice time in seven postseason games. He produced just five total points for the Leafs. Like Jarnkork he’ll head to unrestricted free agency on a down note and may have been better off continuing to play a bigger role in Seattle.

On the plus side, Blackwell finally got to play in the Stanley Cup Playoffs, which we’re certain he does not regret. And one could argue that exposure in the Toronto media market is not a bad thing. But, unfortunately, this one feels closer to the “losers” category to us.

Washington Capitals – Marcus Johansson is a fine player, and he may ultimately re-sign with the Capitals, but he did not make a notable individual contribution–just eight points in 24 total games–nor did he move the needle for the team. The Capitals were eliminated in the first round after giving up two low draft picks and Daniel Sprong.

Sprong may very well be bound for the AHL next season–in Coachella Valley or elsewhere–but he has a few legitimate NHL-caliber skills. And, compared with Johansson, he is younger, healthier, cheaper, has more offensive upside, and out-produced Johansson on a worse team in less ice time. Not a major deal, but also not a great one for Washington.

That said, it should be noted that the Capitals are likely still quite pleased with their preseason Kraken trade of a 2023 second-round pick to reacquire goalie Vitek Vanecek.

Calgary Flames – The Flames gave up three draft picks–a late 2022 second-round pick (No. 60), a 2023 third-round pick, and a 2024 seventh-round pick–for Jarnkrok. In terms of total value, that’s probably the equivalent of just a single mid-second-round pick. Even still, with some Calgary writers calling Jarnkrok a “failed experiment” and the disappointing end to the Battle of Alberta, Calgary grades out as a clear “loser” in this deal.

Nashville Predators – Jeremy Lauzon did not move the needle for a Predators team that was summarily dispatched by the Colorado Avalanche in the Stanley Cup Playoffs. Yet, Nashville conceded a valuable, mid-second-round pick for the player. Lauzon will likely return to Nashville as a restricted free agent this summer, and he may yet justify the deal, but today this looks like a clear value win for the Kraken.

What do you think? How did the Kraken do? Which player or team came out the best or worst?