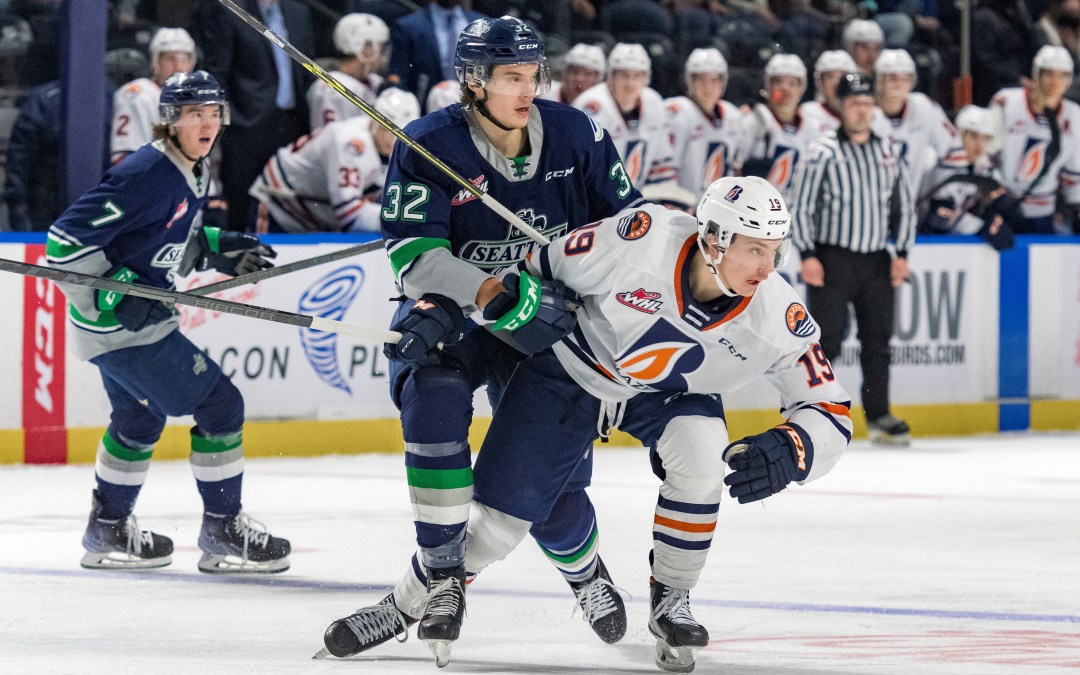 The Seattle Thunderbirds will face the Kamloops Blazers this weekend in the WHL’s Western Conference Championship. A week ago, it looked like Seattle’s season was about to end. They played perhaps the worst game of the playoffs during a 5-1 home loss against the Portland Winterhawks. The loss put Seattle’s back against the wall and the Thunderbirds were down three games to one in their best-of-seven, second-round series.

“It stung for a little while,” Thunderbirds captain Tyrel Bauer said. “The gravity of the situation kind of started to dwell on us knowing that now we’re playing for our lives here. Our motto was just one more day, just play one more day, spend one more day with each other. We have a lot of belief in the group.”

That belief manifested itself as Seattle won the following two games, setting up an all-or-nothing Game 7, in Portland, against the Thunderbirds’ most bitter rivals. Junior hockey players don’t get to experience the thrill and angst that a Game 7 provides very often.

Growing up, they play in tournaments and maybe have a tournament final, but that pales in comparison to the finality of a Game 7 in the playoffs. Few of Seattle’s players had experienced it before.

“Playoff hockey is the most fun you’ll have playing hockey,” center Henrik Rybinski said. “It’s fun to battle with your teammates, and it’s what hockey is all about. You don’t dream about playing regular season. [Game 7] was nerve wracking, but [you] just got to realize you just gotta go and play. You had to put all those nerves behind you and just go out there and just play the way you can play and stick to the game plan.”

Seattle skated away with a 6-3 win with Rybinski picking up a pair of assists and a plus-4 rating.

The win propelled the Thunderbirds to the Western Conference Championship Series against the Kamloops Blazers. It’s the third time Seattle has been this far in the playoffs since 2016. Seattle won the conference that year and would win again the following season on its way to the first WHL title in franchise history.

COVID wiped out the last two playoffs in the WHL, and for the Seattle players, they are savoring the chance in front of them now.

To win again they’ll have to get past a good Kamloops squad who won the B.C. Division during the regular season and will have home ice in this series.

“They’re a really good team so just stick to what makes us good,” Rybinski said. “Being hard on the forecheck, getting the O-zone buzzing, which we are really good at. We got some big guys who can protect protect the puck and get pucks to the net and then, just be cautious. It’ll be a great series.”

Kamloops versus Seattle, the match up

The series starts Friday and Saturday with both Games 1 and 2 played in Kamloops at the Sandman Centre. Game’s 3 and 4 will be Tuesday the 24th and Wednesday the 25th at the accesso ShoWare Center.

Kamloops won the season series, taking two of three games. Those wins for the Blazers came in back-to-back games in late November, while Seattle won the only game of the season series in Kamloops.

The two teams looked different for those games which are meaningless when handicapping the upcoming series.

“Those games might as well have been a season ago with how much has transpired since then,” Thunderbirds assistant coach Kyle Hagel said. “Their team looks a little bit different, and we’ve evolved a lot since then. But in preparation they have a lot of similarities with Portland in some ways and are really good on special teams… some of the same blueprint for us will apply.”

Seattle has its hands full here, and the Blazers are a nice combination of a team that can score (second in the Western Conference in goals) and defends (allowed the fewest goals in the conference).

Kamloops will feature six NHL drafted or signed players led by forward Logan Stankoven (Dallas Stars), who was third in the WHL scoring race with 104 points. He’s loaded with speed and skill, and the Thunderbirds will need to try and contain the impact he has on the series. In 10 playoff games this spring he’s piled up 21 points.

In net, Kamloops will feature New York Rangers 2020 fourth-round pick Dylan Garand who was second in the WHL regular season with a 2.16 goals-against average and a .925 save percentage. He won eight of ten games so far in the playoffs with an impressive .940 save percentage.

The Thunderbirds have seven drafted or signed players along with three – defensemen Kevin Korchinski and forwards Reid Schaefer and Jordan Gustafson – who are expected to be selected in the first three rounds of July’s NHL Draft. Seattle was led this season by a breakout year from Jared Davidson. 19, who scored 42 times and will be counted on again.

Rybinski (Washington Capitals) and Point Roberts product Lucas Svejkovsky (Pittsburgh Penguins) have come on strong for the Thunderbirds in the playoffs. Seattle acquired Svejkovsky at the trade deadline, and in 33 games with the Thunderbirds, he’s scored 23 goals and 46 points. Rybinski is in his final season with Seattle and is a relentless forechecker and playmaker.

“Rybinski has just been a machine out there on the forecheck, and he’s all over the puck,” Hagel said. “He’s our engine that drives us, and Svejkovsky has been fantastic coming through with clutch, huge goals. When we got him we knew that he was gonna score, but I think that we’ve all been surprised at how incredibly competitive he is and how good his habits are.”

The two are playing their final junior seasons as 20-year-olds and will be looking to go out with a trip to the WHL Championship Series.

Thomas Milic will mind the net for the Thunderbirds and is a player on a mission. Overlooked by the NHL Draft – although he was an invite to the Seattle Kraken training camp only to miss it to injury before he got there – Milic had an outstanding series against Portland where he had one shutout and comes into the series hot.

The supporting cast for the Thunderbirds will be key. They have players like Matt Rempe (New York Rangers), Conner Roulette (Dallas Stars), and Lucas Ciona (Calgary Flames) who can provide plenty of offense. On the blue line, Seattle is stout with Bauer (Winnipeg Jets) and Slovakian import Sam Knazko (Columbus Blue Jackets) who will be tasked with slowing down Stankoven, et al.

Special teams can make or break a playoff series, and discipline will be key for both as Seattle’s power play is clicking at 27.7 percent in the playoffs. The Blazers aren’t slouching either with a 22.4 percent power-play unit.

The Thunderbirds struggled with Portland’s power play in the second round, and their penalty kill is at 75 percent for the playoffs, something they’ll have to figure out if they want to win.

One intangible that is hard to measure is being battle-tested. The Blazers arrived at the Conference Championship beating two teams that finished at the bottom of the playoff bracket. They opened with a sweep of seventh-seeded Spokane and then beat the eighth-seeded Vancouver Giants.

The Thunderbirds had to go through the fifth-seeded Kelowna Rockets in the first round and the third-seeded Winterhawks. Seattle also dealt with a number of injuries during the regular season and found ways to win, as they did coming from behind in the second round, staving off elimination in the final three games.

“I think it strengthens our team in the sense that guys are even more confident that they can come back and perform when their back’s against the wall,” Hagel said.

That confidence will be put to the test against the Blazers.