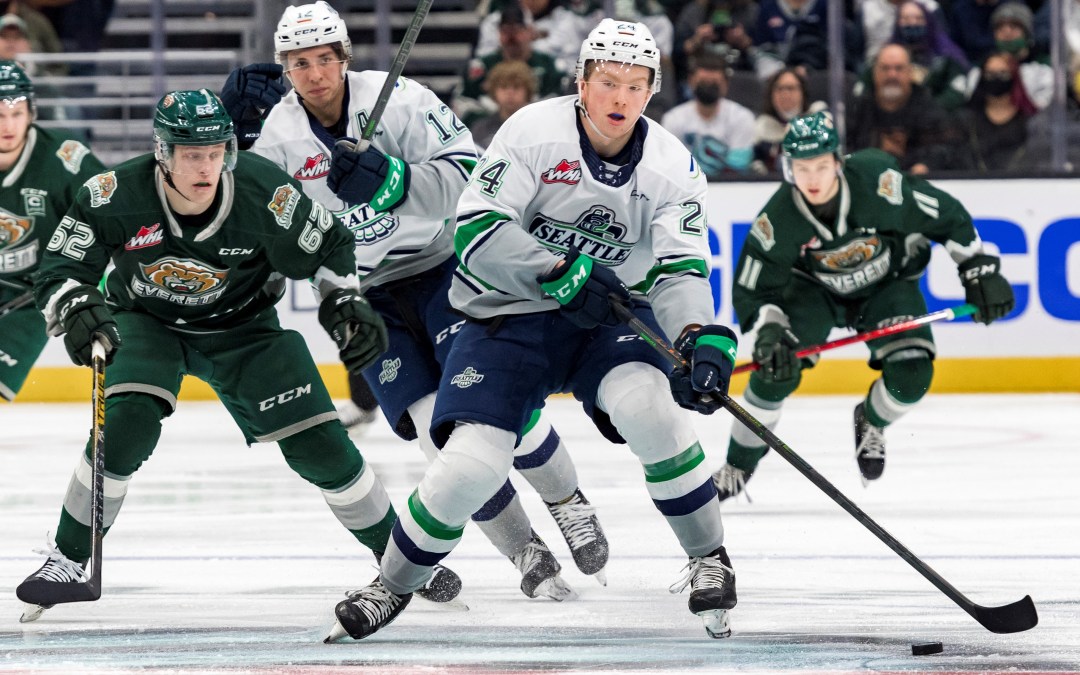 Last summer, Seattle Thunderbirds winger Reid Schaefer prepared for his first full season in the Western Hockey League with some grueling workouts. That’s standard for hockey players, but Schaefer would get a surprise in the fall when the NHL Central Scouting Service released its first rankings for the 2022 NHL Draft and Schaefer’s name was on the list as a prospect to be selected.

“I wasn’t really expecting to see myself on that list,” Schaefer said after a recent Thunderbirds practice. “It was great to feel noticed. It’s definitely one of those confidence boosters and to see that just makes you want to get that much more hungrier and just rise up the list.”

Being rated a ‘C’ skater was a surprise because coming into this season, Schaefer had played 25 WHL games over two years and had three assists with no goals. But the scouts saw something in the 18-year-old from Spruce Grove, Alberta.

It turns out, the scouts were onto something with Schaefer. His first goal of the 2021-22 season came right away on opening night in Portland, and that was just the beginning. By the end of the regular season Schaefer had 32 goals, and with his Thunderbirds team in the Western Conference Championship Series, he’s scored six more times in 14 playoff games to go with 11 assists.

“I got my feet wet [last season] and learned what it takes to be successful in this league,” Schaefer said. “Really took it into my offseason and just worked hard and came into this year with that mindset. I’m just going to give it all and just work hard and I think it’s definitely worked out this season. I’ve been having some success.”

Having success is putting it lightly.

As he kept scoring goals he started to rise up the draft rankings. In March he was invited to play in the CHL Top Prospects game with some of the best players in the CHL.

“It was awesome to be on a big stage like that and be noticed,” Schaefer said. “Such a cool experience. Not everyone gets to have that experience in their life. To be able to be a part of it was definitely awesome and I really enjoyed it.”

He didn’t find the back of the net in that game but was noticeable. He created chances and was making plays at both ends of the ice. The highlight of the night came late in the game after Schaefer made a power move to get in close to the net for a scoring chance. Before he could unleash a shot, however, he was tackled from behind by the opposing defenseman.

That defenseman happened to be his Seattle teammate, Kevin Korchinski.

“Just battling against your own teammate,” Schaefer says of the play, with a laugh. “That never really happens so for him to get a penalty against me was pretty funny.”

Schaefer has never been to Montreal but says he’s hoping that he and his family make the trip this July to hear his name called at the 2022 NHL Draft.

What do the scouts say about Reid Schaefer?

Whether it was the 32 goals or the Top Prospects performance, Schaefer has climbed up the draft rankings. On some lists, he’s ascended all the way into being a potential first-round pick.

The upside for Schaefer is somewhat obvious. He has the size, he has a good shot, and he can skate. That’s an attractive package for scouts.

“He’s a strong, two-way winger with some scoring touch,” an NHL scout says of Schaefer. “He made some real nice strides in his game since the beginning of the year. He could add a little quickness overall.”

Schaefer describes himself as a power forward who has some speed and grit to his game. When it comes to what skills he wants to improve on, he agrees with the scout.

“I’m definitely looking to enhance my quickness,” he said. “I think my first three strides, I want to be better at and be more explosive, but also my lateral agility. Just being a bigger guy, I want to be able to shake defenders and use my speed to my advantage.”

It’s one thing to have size, but Schaefer has some speed and hands, which here he uses to create a scoring chance while fending off an opposing defenseman.

Schaefer scored nine times on the power play this past regular season. Here you can see that he can get into scoring areas and has a quick release and gets a good shot.

His shot is an asset, and he can score from all over the ice. Here he leans into a slapper from the point.