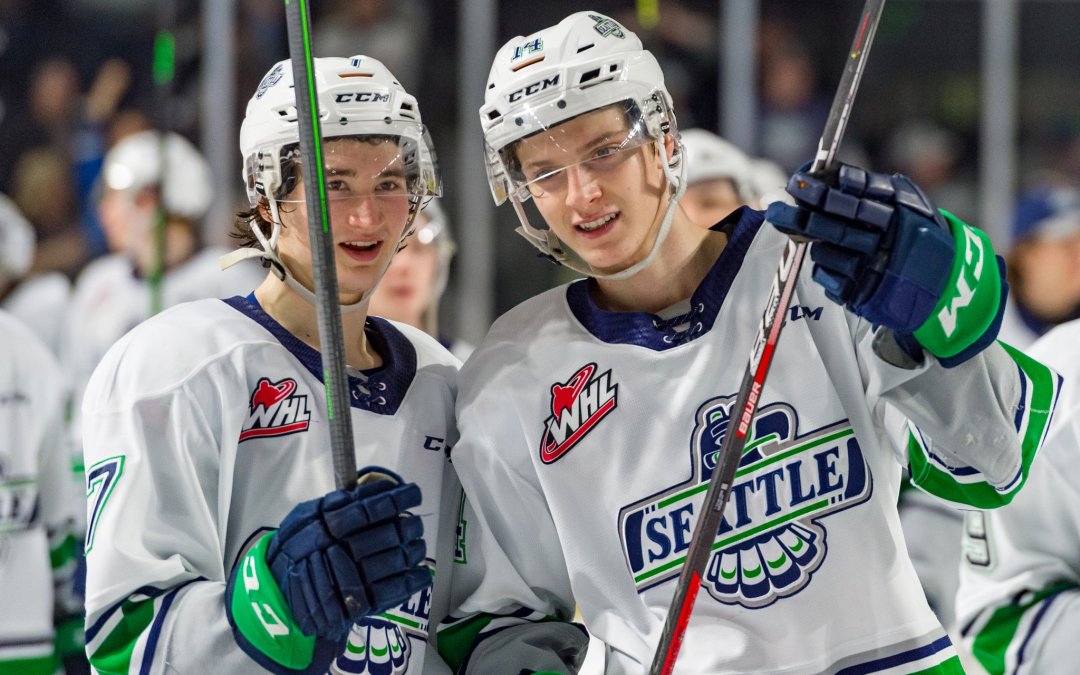 While the Seattle Kraken had the night off Wednesday, general manager Ron Francis was in Kingston, Ont., taking in the CHL Top Prospects Game.

The game is an annual event that features the Canadian Hockey League’s best NHL Draft-eligible players. Seattle should end up with a top pick and acquired five additional picks for the upcoming draft at Monday’s NHL Trade Deadline, so hopefully, Francis took copious notes.

Playing in these games is a feather in the caps for the prospects, who were looking to put their best skate forward and catch the eye of one of the many scouts in attendance. There’s an old saying that as a player, you can’t hurt your draft stock in the game, but you can help it.

While it is set up and looks like an all-star game, it’s not like what we’ve come to see in the NHL All-Star Game. These guys were playing hard and there was hitting, a little bad blood, and in the past, players have even dropped the gloves.

Team White got the win in the CHL Top Prospects Game, beating Team Red 3-1, but ultimately, who won is irrelevant. The game is about the players and overall, it was an entertaining night. Here are takeaways from Wednesday’s game.

Shane Wright has been the presumptive first overall pick for the 2022 NHL Draft for quite some time, so all eyes were on him Wednesday night. He showed up early by creating a breakaway chance on his first shift. He didn’t score on that but would moments later when he converted on a 2-on-1. Wright looked good but did not dominate or take over the game.

Playing against his Winnipeg ICE teammate Conor Geekie (who had a great game in his own right), Savoie made a strong case for him to be the second pick overall. One of the knocks on him is that he’s somewhat undersized, but Wednesday showed that he has no fear. While he didn’t score, Savoie came close on numerous occasions where he drove the net hard and worked his way into the middle of the ice.

Francis was caught on camera at one point, scribbling in a notebook, and you have to wonder what he thought about two guys who could be available to Seattle, depending on how the lotto balls fall.

Jagger Firkus, who plays for the Western Hockey League’s Moose Jaw Warriors, stood out with a “Player of the Game” performance. He’s ranked 33rd by NHL’s Central Scouting among North American skaters but may start creeping up that list.

Firkus ended the game with a goal and an assist and was dangerous all night. His goal tied the game and showed off a great shot and quick release.

It’s those skills that have led to 33 goals and 75 points in 60 games with the Warriors this season. He may not move into the first round but for a team with four second-round picks for the upcoming draft, might the Kraken be interested in a speedy, scoring center?

The Thunderbirds had three players representing in the CHL Top Prospects Game, and power forward Reid Schaefer stood out the most. Schaefer is big, listed at 6-foot-3 and 213 pounds, but has skill to match. He had played less than 30 WHL games prior to this season, after being an eighth-round pick in the WHL Draft.

This season he’s exploded to score 29 goals and 48 points through 57 games. Wednesday he was a noticeable force on the ice, creating plays, and drew a penalty in the third period – ironically against his Seattle teammate Kevin Korchinski, who dragged him to the ice. Schaefer has been rated as a C skater by Central Scouting, but there’s no doubt he’s on the rise.

Schaefer also dominated the skills testing on Tuesday, finishing in the top three for several categories.

Korchinski had a strong game running the Team Red power play, and the third Thunderbird, Jordan Gustafson, was quieter but had a couple nice moments while playing out of position at the wing.

Spokane Chiefs goalie Mason Beaupit has had a tough season with a struggling, young team, but he made several key saves to preserve the Team White lead while playing in the third period.