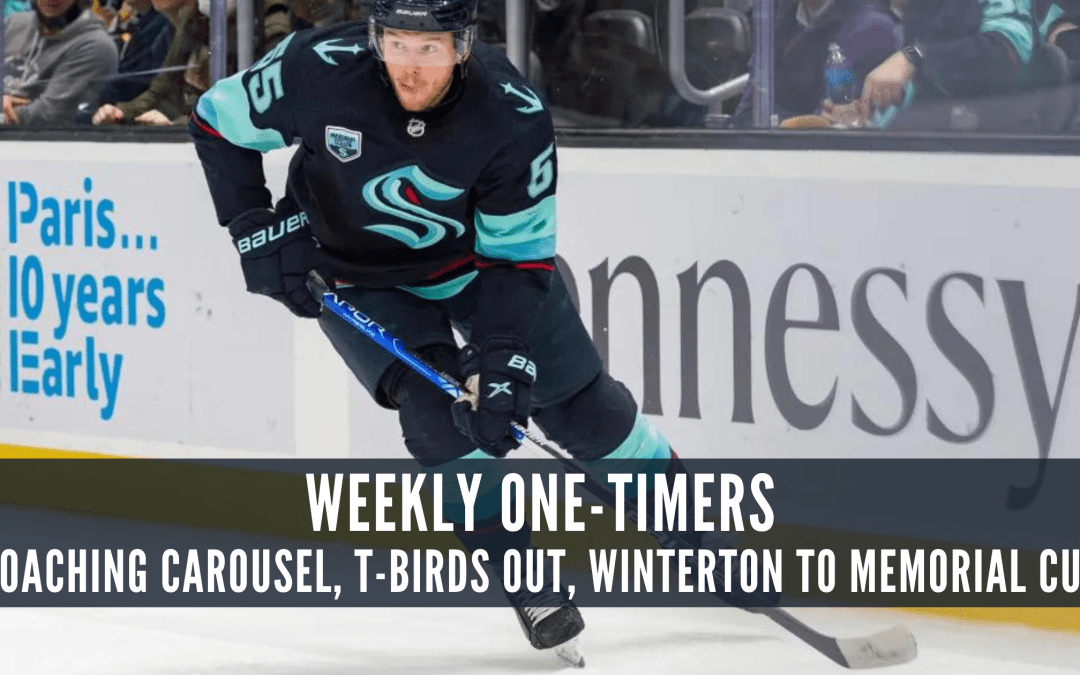 It feels SO GOOD to be back! It’s been a long time since we’ve put pen to paper for the purpose of giving you one-timers of the weekly variety, but here we are, ready to serve up some bite-sized hockey news for you.

As is tradition in Weekly One-Timers, we shall start with some Kraken and other local news, then expand the sphere of information to include the whole hockey world. Let’s dig into it, shall we?

Technically this isn’t Kraken news, but it is at least Kraken related. Former Seattle defenseman Jeremy Lauzon re-signed with the Nashville Predators for four years at a $2 million annual salary.

Due to injury, Lauzon only ended up playing 13 games with the Preds after being traded by the Kraken at the NHL Trade Deadline for a second-round pick in the upcoming draft. He had one goal and zero assists in that time with 14 penalty minutes.

It was not the most impressive stat line, so we were a tad surprised to see the four-year term given by general manager David Poile. Perhaps he heard people saying a second-round pick for Lauzon was too much and felt he needed to prove it was a good trade. Or perhaps he just really likes the player and wants to keep him around for a while.

Either way, we’re happy to see Lauzon get a nice payday.

Ryan Winterton, selected by the Kraken in the third round of the 2021 NHL Entry Draft, is headed to the CHL’s Memorial Cup after his Hamilton Bulldogs knocked off the Windsor Spitfires in Game 7 of the OHL Championship Series.

The Bulldogs celebrated their berth in the Memorial Cup by pounding a giant nail into a table using a sledgehammer.

We have no idea what this is about, but we love it.

The Memorial Cup starts Monday and will run through June 29.

The Seattle Thunderbirds encountered adversity through seemingly every step of their journey this season, but they just kept winning, even as the odds stacked up against them. They battled through injuries, COVID issues, and ill-timed suspensions. After cruising past Kelowna in the first round, the T-Birds faced elimination games against Portland and Kamloops, only to force Game 7’s in both series and keep themselves alive.

But the high-flying Edmonton Oil Kings, with their aggressive forecheck and star-studded lineup of future NHLers, ultimately proved to be too much in the end.

After winning Game 1 of the WHL Championship Series in Edmonton, the T-Birds lost the next three straight, including their only two home games of the series. Again on the brink of elimination, they battled back for a road win in Game 5, but finally succumbed with a 2-0 defeat in Game 6.

We attended several games of the playoffs, including both of the home games in the Championship Series, and we have to mention what an absolute treat it was to get to witness high-level hockey that deep in a postseason, and seemingly in the middle of the summer. It was such a blast to be a part of that, and we hope the kids on that T-Birds roster will remain very proud of what they accomplished this season.

We don’t have much to share on this topic that you don’t know already, but the Avalanche and Lightning have finally linked up for a postseason showdown, a matchup that has felt like destiny for several years now.

The two perennially elite teams got off to a rip-roaring start on Thursday, with the Avs eking out a 4-3 overtime victory after the Bolts had erased a two-goal deficit.

This has the makings of an all-time great Stanley Cup Final, and the fans seem to be enjoying it so far.

The NHL coaching carousel kicked it into high gear this week. In a spring/early summer in which some well-respected coaches around the league found themselves without jobs when their teams were dispatched, it’s no surprise to see some big hires being made.

Bruce Cassidy was hired by the Vegas Golden Knights after just a few days of unemployment, and our old buddy John Tortorella has Re: Torted himself back into coaching by getting hired by the Philadelphia Flyers.

Interestingly, Barry Trotz remains without a job, though we can’t help wondering if he has quietly passed on at least one opportunity. Trotz has been tied to the Winnipeg Jets lately, and the Winnipeg Sun reports he will be in talks with them again this weekend.