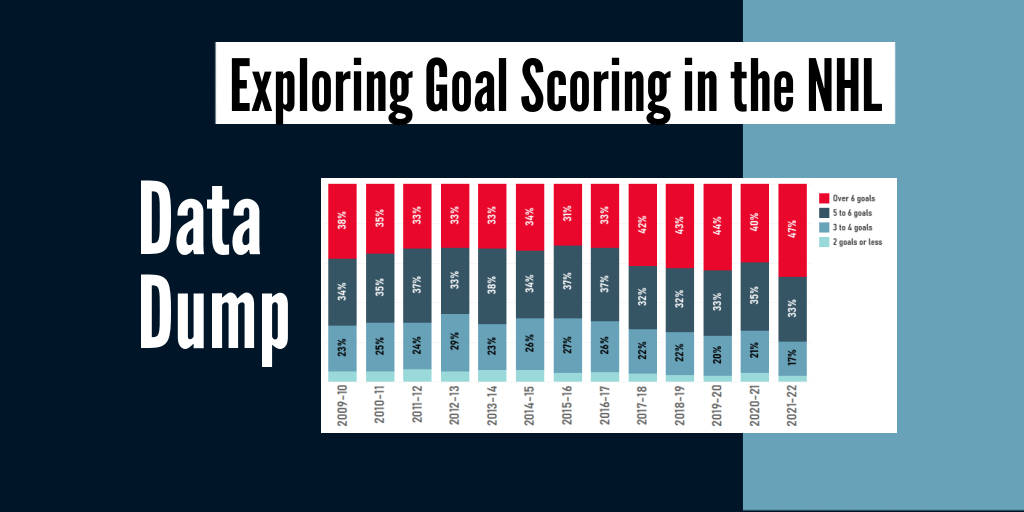 We have been seeing some eye-popping goal totals in games across the NHL, so we thought it would be a good time to dig into the numbers to investigate if there has been a significant increase in goal scoring across the NHL.

As you can see above, scoring is up to 6.30 goals per game compared to 5.9 last year. There could be several reasons for this increase.

Seattle: Adding a 32nd franchise to the league does dilute the talent across the league, which creates more mistakes and more scoring. It is pretty challenging to show the impact, but we need to acknowledge this could be a factor.

COVID: Last season and a good part of this season were disrupted by COVID. It impacted team schedules, practice days, and personnel decisions, and although players and coaches won’t typically admit it, this had to have taken a toll on teams on the ice.

Youth Movement: There are several pundits covering the league that have suggested that the next generation of goal scorers is leaving its mark on the league. Debunked.

Based on the chart above, there is not a strong connection of youth scoring and the increase on scoring across the league. Players that are 24 or younger only account for 21 percent of the goals scored across the league this year compared to 26 percent of goals last year.

Empty-Net Goals: Over the last 10 seasons, the trend is for coaches to pull goalies earlier and earlier to give themselves a chance to win. This is creating more opportunity for empty-net goals.

…And while we are here, we might as well show this chart of the number of empty-net goals against by team.

Ouch. This should be no surprise to Kraken fans who saw enough empty-net goals against to last a lifetime.

Scoring for and against by NHL team

Here is how scoring breaks down by team and how it has changed from last season.

Florida had the biggest increase in scoring year over year and is currently leading the league in average goals scored per game. If the Dallas Stars make the playoffs, they will have the lowest-scoring team in the postseason, though they are just .01 goals per game behind the Los Angeles Kings in this metric.

Conversely, this is how the scoring sizes up for goals against.

Of the NHL Stanley Cup playoff teams, the Toronto Maple Leafs are allowing the most goals per game in the league, and it will certainly be something to keep an eye on when the playoffs start next week.

Goal scoring is great, but are the games still competitive? No one wants to see blowouts. To get a better idea of the competitiveness of games, we can look at the average margin of victory.

On the surface, the games appear to be getting less competitive. However, when you account for the .06 increase in empty-net goals scored per game year over year, the average margin of victory would be 2.23.

Will this trend continue?

Here is one last chart that shows you the distribution of players’ goal scoring by age.

Scoring is up across the league, but it would be a stretch to say that we are entering a new boom of scoring in the league, especially considering the top 10 goal scorers are very familiar faces. Additionally, it would be hard to identify the next generation of players that will backfill guys like Auston Matthews, Leon Draisaitl, and Connor McDavid.