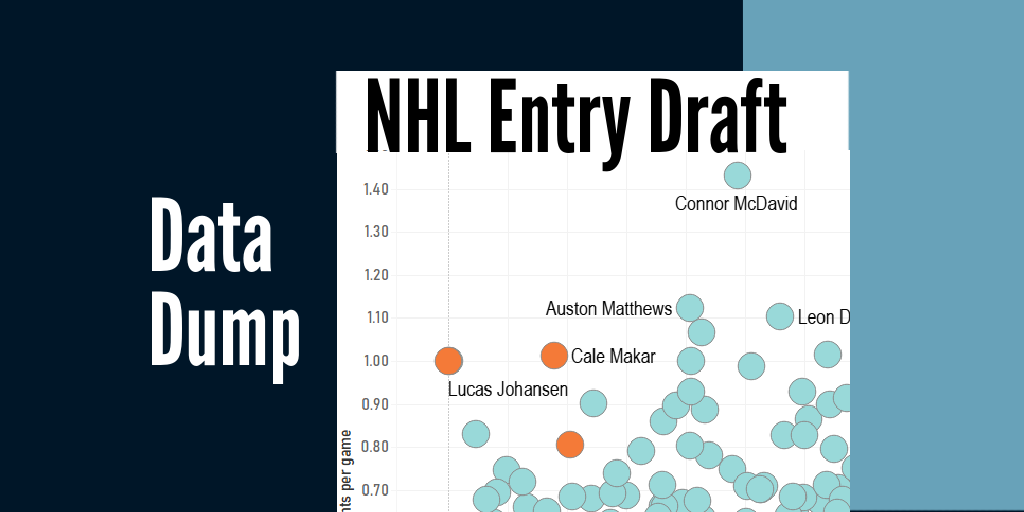 It is NHL Entry Draft eve in the hockey world, so we thought it would be a good idea to do a data dump on the topic. We will go over who typically gets drafted, expectations, and cover a bit on the Kraken’s specific draft picks.

Being selected in the NHL Entry Draft does not guarantee the player will make it to the NHL. The later the draft pick, the less likely a player is to make it to the NHL. Here is a look at the percentage of players drafted between 2000 and 2012 that played at least 50 regular-season games in the NHL. We selected this range because this gives plenty of time for careers to have played out. If a player drafted between 2000 and 2012 hasn’t played 50 career games yet, it is fairly safe to say he will not be hitting that milestone.

Additionally, the later the draft pick, the longer it takes to break into the NHL. Outside of the first round of the draft, teams take the long view for their picks. Here is a look at the number of players that started their rookie seasons in the NHL in relation to their draft year.

As you would expect, the career curves vary by draft round.

Here is a look at the average number of games played by season in relation to draft year.

First-round draft picks are clearly the most valuable selections in the draft, but even within the first round, the projections vary quite a bit.

With the Kraken’s fourth overall draft pick this year, there is a chance that the player selected plays this season in the NHL, but it is more likely they play in the NHL during the 2023-24 season.

In the past three years, there has been an increase in Russian players being drafted. It will be interesting to see how teams will handle Russian prospects, given the current geopolitical landscape.

The top leagues represented in the NHL Entry Draft tend to be the North American major junior/tier one hockey leagues. Here is a look at the breakdown over the last five drafts.

Comparing leagues across the globe and even within North America is not perfect. For example, the USA Hockey National Team Development Program (USNTDP) U18 team mostly plays in the USHL, but their schedule plays college teams as well as international games. That is unique for that team and league relative to the other leagues. For categorical purposes, we classify them as USHL.

If we isolate just the first-round picks over the last five years, the top leagues shift around a bit. Here is how it looks.

There will likely be trades before the 2022 NHL Entry Draft begins on Thursday evening, but for now, here is the current view of the draft picks by team.

In summary, not all picks share the same value. Montreal’s volume of 14 picks heading into the draft is impressive. However, Arizona’s three first-round and four second-round draft picks should capture the highest volume of future NHL players.

The Kraken’s draft picks are as follows:

Here is a list of some notable current players and their draft positions:

Note that this is selecting only the standouts at these draft positions and should not be the expectation of all the Kraken draft picks.