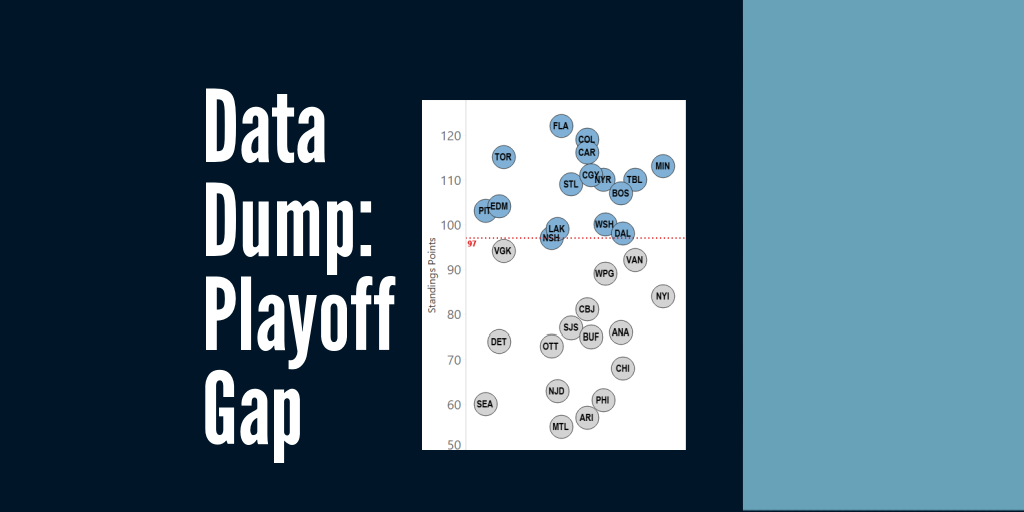 A few weeks ago, I spent some time digging into NHL playoff projections based on an adjusted goal differential. I forecasted a rough estimate of where the Seattle Kraken could land, based on that metric, in the 2022-23 season with their off-season moves. In this post, I am going to look at team points to determine how much the Kraken will need to improve to make it to the Stanley Cup Playoffs in 2023 and how often a team can rebound after a season like the Kraken had in 2021-22 to qualify for the playoffs.

What does it take to qualify for the playoffs?

The Kraken had just 60 points last year, while the last team into the playoffs, the Nashville Predators, had 97 points. When looking over the last 11 seasons, excluding the 2019-20 season that had a unique play-in format, the average minimum point total of the bottom playoff team was 92.4 points on the season.

If we assume the 92.4-point average to be the target to make the playoffs, Seattle will need to improve by 32.4 points next season. How common is it for a team to improve by 32+ points from one season to the next? Let’s look at the data.

Uh oh. That does not look good. Only two percent of NHL teams since 2010 have seen an increase of 32 points or more from one season to the next. However, that is not a fair comparison to expect all teams to possibly increase their point total by 30+ points. A team with 120 points in the previous season does not have the same likelihood to increase their point total by 30 points as compared to a team with 70 points in the previous year.
To illustrate the point, here is a look at all the teams since the 2011-12 season by their previous year’s point total (x axis) and their change in points the following season (y axis).

As the slope of the average line indicates, the better you did in a given year, the less likely you will improve in the following year. Therefore, the previous statement about two percent of the time a team improves 32+ points is not a fair comparable.

Let’s isolate all the teams with 70 or fewer points in the previous season to see how frequently they improve by 32 points.

It is not a perfect calculation but a 15 percent chance of a 32-point improvement and theoretically qualifying for the playoffs is a believable number.

Here is the same scatter plot from above, filtering all the teams with 70-point seasons.

Another area I wanted to investigate was the frequency with which teams climb the standings to qualify for the playoffs. Last season the Seattle Kraken finished 30th in the league-wide standings. It seems a bit delusional to think a team that was that low in the standings one year could turn around to qualify for the playoffs the next year. To test our sanity, let us look at how other teams have done the following year after being one of the worst in the league. I have isolated all the teams that placed 28th in the league or below since the 2000-01 season and then looked at how often those teams qualified for the playoffs the following year.

A team that placed where the Kraken finished last season qualified for the playoffs the following year 17 percent of the time. Personally, that’s better than I expected and feel that is enough to say it is a possibility.

What are the chances?

This was a simple approach to evaluating the likelihood the Kraken improved enough to be a playoff team next season. Both the standings approach and points approach indicate that teams coming off a season like the Kraken have about a 15 percent chance to make the playoffs the following year. That seems believable, reasonable, and the right odds to have some hope going into the season.

Do you think they qualify for the playoffs next season? Leave your thoughts in the comments section below.