Are the Seattle Kraken now a playoff contender? 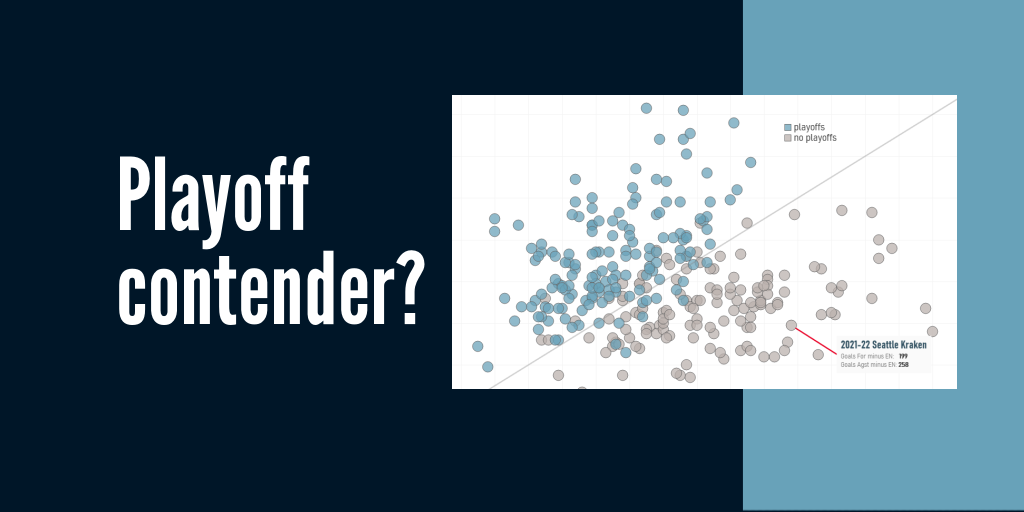 In the third installment of this “becoming a playoff contender” series, we evaluate the Seattle Kraken offseason moves and determine what are the chances they make the playoffs. If you need a refresher, in Part 1, we determined that an NHL team will need a non-empty-net goal differential of minus five to have a 50 percent chance of making the playoffs. In Part 2 of the series, we dug into the goal forecast of the current players on the roster to determine the Kraken would need to add 45.6 more goals this offseason.

Roster changes prior to free agency

The forecast from Part 2 was based on all rostered and restricted free agent players on the team at the time. A lot has changed since then so let’s evaluate the changes.

The first order of business was the NHL Entry Draft. As most of you know by now, Shane Wright fell to the Seattle Kraken in the fourth overall spot in the draft. Wright was one of the few players taken in the draft expected to play in the NHL this season. There is a chance Wright does not make the Kraken roster immediately, but we feel that is unlikely and therefore will be punching him into the scoring forecast.

The prior goal forecast was also done before the qualifying offer deadline for all pending restricted free agents. The Kraken ended up not qualifying Ryan Donato*, Daniel Sprong, Haydn Fleury, and Dennis Cholowski. We will come back to Donato in a second, but this impacted the forecasted numbers since Donato and Sprong were forecasting over 15 goals for next season.

The expected goals for Fleury and Cholowski also impacted the forecast, but we only projected three goals combined for both of them, so they did not have a material impact on the overall forecasted number. When we removed Donato, Sprong, Fleury, and Cholowski, the gap in goals to become a playoff contender became much bigger.

Uh oh. They were heading in the wrong direction.

In addition to Shane Wright, the Kraken would go on to add forwards André Burakovsky, Andrew Poturalski, and John Hayden plus defenseman Justin Schultz during the first week of free agency. For a while, it looked as if the Kraken were done with only a few goal-scoring players left available. Nine days after the free agency period opened, the Kraken landed Oliver Bjorkstrand in a steal of a trade for the Kraken. With Bjorkstrand and Burakovsky on the roster, things began to look better for the scoring capabilities of the Kraken for the 2022-23 season.

With these roster additions, now is time to punch them into the forecast. First up, how do we forecast Shane Wright’s numbers this upcoming season? For an estimate on Wright, we isolated the forwards selected in the top five picks since 2015 that would go on to play more than 15 games in the NHL in the season immediately after their draft season.

The average goals scored for that cohort of players was 16.8 in their first season. To be slightly more conservative, we are going to lower Wright’s forecasted goal totals to 14.8 for 2022-23. We recognize this is a very simple methodology but feel it is a reasonable number of goals to expect of Wright.

Plugging in the other player additions is relatively easy since it is based on their 2021-22 adjusted goals per game times the number of games we forecast those players to play in the 2022-23 season.

We also recognize there are some tweaks we could make to individual players’ expected performances next season. We are intentionally not making any individual adjustments because we think some players will exceed the forecast while others will be below the forecast. At the end of the season, they will even themselves out. When we put it all together, here is the current forecast for adjusted goal differential.

After all the changes and modifications to the goal scoring forecast, we are estimating the Kraken will have a -7.7 adjusted goal differential. If that forecast is realized, the Kraken should stick around the playoff hunt and would have a decent shot at making it to the postseason.

Based on the chart above, should the Kraken have a goal differential of minus seven, this gives them a 33 percent chance of making the playoffs.

Again, we recognize this is an over-simplified forecast model, but there were significantly more complicated models that were way off last season.

Here are a few things that could go wrong for the Kraken:

There are also things that could go right for the Kraken in 2022-23.

It is rare for a team to bounce back from a 60-point season and vault themselves into a playoff spot. Since the 2000-01 season, only five teams qualified for the Stanley Cup Playoffs the season after posting 70 points or fewer. So maybe we should temper the expectations a bit as this team has several young pieces with new players that might not be totally comfortable playing with each other yet. With that said, playing meaningful games in March, even with an outside chance of making the playoffs, should be considered a success for 2022-23.