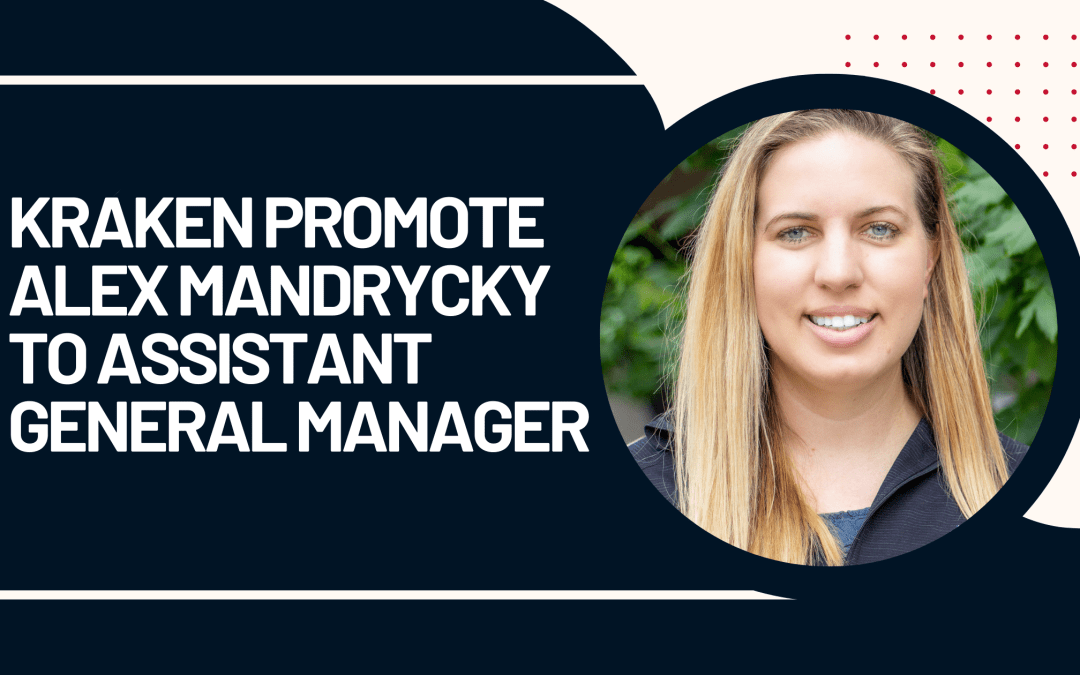 The Kraken have elevated Alexandra Mandrycky into an assistant general manager role with the club. The promotion comes after Mandrycky served as the team’s director of hockey strategy and research during the buildup to the 2021 Expansion Draft and Seattle’s inaugural 2021-22 season. Mandrycky joins Ricky Olczyk and Jason Botterill as a third AGM in the Kraken front office, and the trio will work together to support general manager Ron Francis.

Mandrycky built the team’s analytical infrastructure and research and development department from scratch. Last season, she hired and oversaw a team of four employees, but her role will now expand significantly.

“I’ll continue overseeing the research and development team; we have a group of four now, and we’ll be adding a few more over the course of this season,” Mandrycky said. “Last year I worked really closely with the amateur scouts on the amateur draft, and part of this new role is our director of amateur scouting, Robert Kron, will report into me. So I’ll continue working with all of [the amateur scouting department] very closely.”

What is interesting about Mandrycky taking such a large stake in the amateur side of the organization is that advanced stats are often hard to come by for evaluating players in the amateur ranks. Mandrycky credits senior quantitative analyst Namita Nandakumar for developing the metrics necessary to help Francis, Kron, and the rest of the staff get the whole picture on prospective Kraken players.

She also says the organization has done an exemplary job of balancing the information her department gives with the more traditional reports that the amateur and pro scouts provide. “I think a question that gets asked a lot is, ‘Is this [player] an analytics guy?’” Mandrycky said. “I don’t know what that means… We’re using analytics to have conversations about players, but I wouldn’t want [Francis] to go out and sign a player that analytics liked, but the scouts hated.”

The promotion is a notable move, as Mandrycky continues to prove herself as one of the fastest-rising executives in the evolving NHL landscape. She broke new ground in 2019 when the team, then called simply “NHL Seattle,” hired her to build its analytics program. The hiring made Mandrycky one of the highest-ranking females in the league at the time. She has since solidified herself as a central figure in Seattle’s front office.

“Alex has earned this promotion through her hard work and dedication to making the Kraken a better organization,” Francis said via press release. “Her knowledge and effort are assets that will continue to serve her well in this role.”

Mandrycky previously spent three years working for the Minnesota Wild as a hockey operations analyst. Before that, she made a name for herself in the analytics community by co-founding what was then a popular site for tracking player data, War On Ice.

Mandrycky is not the first female to hold the assistant general manager title in the NHL, but she joins a very select group of impressive women who are helping to change the sport. Angela Gorgone held the title for the Mighty Ducks of Anaheim back in 1996-97, but no woman held the title between then and when former player agent Emilie Castonguay was hired into the position by the Vancouver Canucks in Jan., 2022.

After Castonguay was hired, Hayley Wickenheiser joined Toronto, Meghan Hunter went to Chicago, and Kate Madigan went to New Jersey, all with AGM titles. Vancouver also hired former pro scout Cammi Granato away from the Kraken to serve alongside Castonguay.

Still, the cultural importance of Mandrycky’s rapid advancement through the hockey world is not lost on her. “Visibility is so key,” she says. “In some ways, it’s nice to not be the first. Other people have paved the way, even though the path is short over the last year or two.”

Camp is just around the corner

The Kraken will start training camp for their second season on Thursday, Sept. 22, at Kraken Community Iceplex. Seattle’s rookies, a group Mandrycky was instrumental in assembling, take the ice a few days earlier on Monday, Sept. 19. Practices are open to the public.