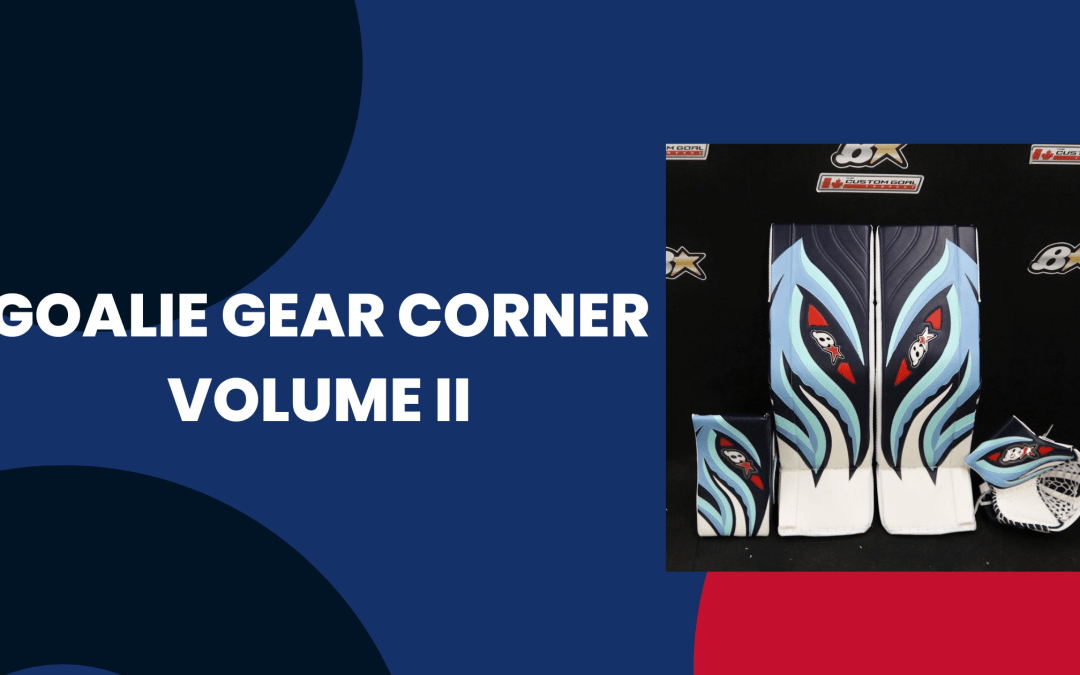 Alright, we admit, we’re way overdue here. We once had grand plans of making Goalie Gear Corner a regular article here on soundofhockey.com, but having an actual hockey team to cover got in the way. Still, it’s the most wonderful time of the year—goalie gear season—so there’s no better time to dust off the old gear-rating abilities and do some ogling. Making these proceedings even more enjoyable, we have some great new gear from Kraken goalies to discuss, which we especially appreciate since we’re able to get in-person looks at their setups.

Without further ado, it is with great pleasure that we finally present to you this second installment of Goalie Gear Corner, in print form.

At this point, it’s just getting ridiculous with Aaron Dell. After leaving the San Jose Sharks following the 2019-20 season, Dell spent the last two seasons bouncing around between Buffalo, New Jersey, Binghamton, and Rochester. And while he hasn’t had the most memorable seasons since departing the Bay Area, his gear has only gotten better as he has aged.

Now he’s back with the Sharks, and while his previous San Jose setup was our favorite Sharks look ever, he may have one-upped himself with his latest look from Brian’s.

Even at rest, these pads look like they’re moving. It’s like how if you look at a spinning wheel for a while and then look at Vincent Van Gogh’s Starry Night, the painting appears to be in motion. It’s the same thing here, but on goalie pads. And yes, we just compared goalie pads to one of the great masterpieces of all time. It’s a stunning look, and the cut-and-sew technique that Brian’s continues to employ remains second to none in terms of graphics.

What makes this setup almost perfect is the dorsal fin, ominously rising out of the blocker and catcher. Outstanding setup.

When the Kraken signed Magnus Hellberg around the start of free agency, we had a feeling there might be something special coming on the goalie gear front.

Hellberg, in his brief stint with the Detroit Red Wings, had worked with Brian’s to put together an outstanding setup that incorporated Detroit’s winged wheel logo to perfection. Taking a scheme of just two colors and a logo that hasn’t changed in almost a century and turning that into a beautiful, modern gear design is no easy feat.

Give Hellberg and the designers at Brian’s the runway of a newly designed deep-sea brand, with a wide color palette, and you just know there’s magic coming. Sure enough, this absolute stunner was the result.

The setup uses a whopping five colors and gives the illusion that each piece of equipment is its own mythical sea beast, without being too “on the nose” with the octopus look. It also subtly works in hints of the actual Kraken logo, though that logo has been stretched and adjusted to fit the pads.

Oddly, our favorite part of these pads might actually be the way Brian’s worked their B-star logo right into the Kraken’s “eye.”

Just unreal. We got our first in-person glimpse of Hellberg’s gear on Tuesday, and it truly is dazzling.

It’s very much an “if you know, you know” setup, paying homage to the King, Henrik Lundqvist. In the earlier years of his career, Hank wore TPS gear, from the brand formerly known as “Louisville TPS.” That brand is no longer one of the foremost goalie gear companies, hence Eisele borrowing one of Hank’s looks but putting it on CCM pads. Lundqvist wore two different versions of pads that looked just like this but in Rangers’ red, white, and blue.

The Minnesota license plate on the chin of the mask is also a nice personal touch here for the Minnesota native.

Another newly acquired netminder for Seattle released pictures and video of his new Kraken mask on Monday, and it is quite sharp.

Painted by Eye Candy Air, the mask reminds us a bit of the mask Chris Driedger wore for most of last season with its white base color and blue accent stripes. The detail is intense here. We especially love the subtle red Kraken eyes on the side.

We also got a first-hand glimpse at Jones’ pad setup on Tuesday from True Hockey, which is mostly plain white, but has Kraken-colored accents on the outer rolls and across the base. The pads and gloves are nothing to write home about, but we do like the look as a whole. It’s a fresh take on the True setup, which isn’t known for much graphic customization, compared with other manufacturers.

Our last entry on this installment of Goalie Gear Corner is a new CCM setup for Victoria Royals netminder Tyler Palmer.

The “print the team logo on the pads” bit has certainly been played out in recent years, but there’s something extra sharp about Palmer’s setup here. We can’t say with 100 percent certainty why this feels sharper than other similar setups, but we think it has to do with the play on the stock graphics that come standard on CCM E FLEX gear. We generally like that look of the E FLEX anyway, but Palmer’s setup takes it and adds some pizzazz.

So, in general, we really like this look, which will soon be coming to a WHL arena near you.