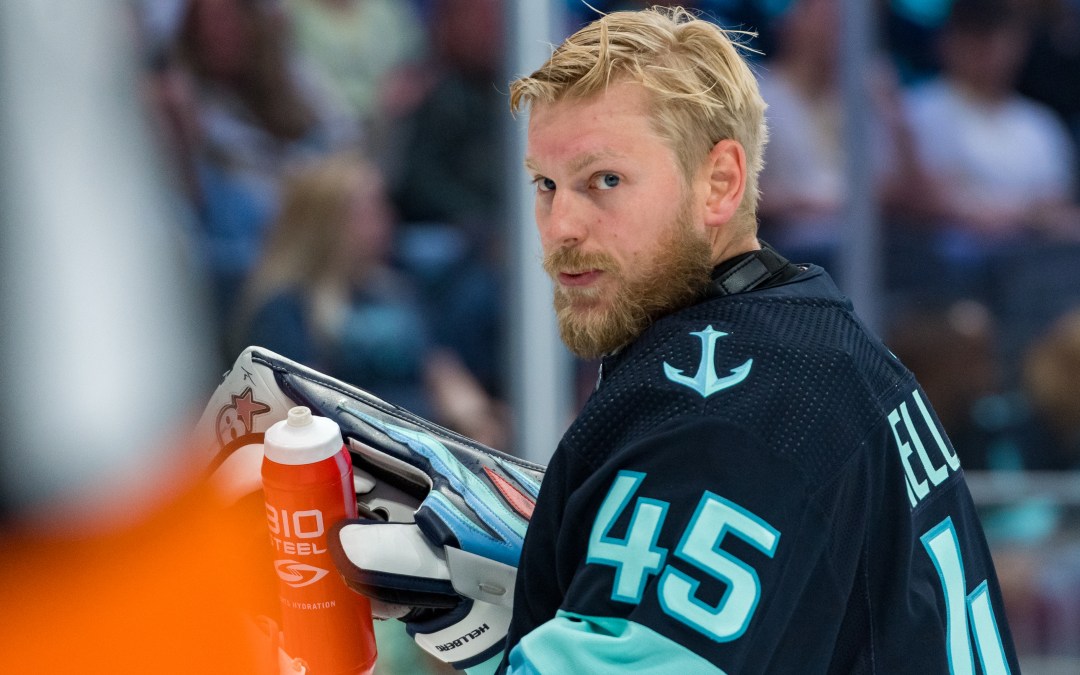 SEATTLE – Kraken goalie Magnus Hellberg was born in Sweden, but hockey has taken the 31-year-old all across the globe, literally. His latest stop is here in Seattle as he looks to find a home with the Kraken.

“I love to compete, and I always want to play at the highest level I can, and I think I’ve been doing that for a long time now,” the 6-foot-5 Hellberg said. “I’ve had the opportunity to play in the Olympics for Team Sweden and the World Championships. I’m really excited to be part of the Kraken now and showcase myself to be able to play in the National Hockey League. This is where I want to be.”

Hellberg got his first taste of Kraken hockey and Climate Pledge Arena Tuesday night, finishing the latter half of the game and kicking away all 15 shots the Calgary Flames put on him.

He said that coming into a game midway through is not ‘optimal’ but could easily happen during any regular season game, and he prepares as if he’s going to play each night. Greeted with shots early in his stint Tuesday is just how he likes it.

“I feel the faster you get a shot and a save in, it makes you feel a lot better,” Hellberg said. “No, I can’t complain about that.”

Hellberg carries himself with an easy-going demeanor, and it’s hard to imagine that he’d complain about anything.

He’s seen the world playing hockey starting with time in the NHL, AHL, and the Kontinental Hockey League in China. He’s been called up and down over his North American career, he’s been traded, and now he’s in Seattle hoping to crack the roster.

Hellberg was the first goalie selected in the 2011 NHL Draft to the Nashville Predators, who picked him in the second round. He would make his North American pro debut the next season, playing mostly in the AHL with the Milwaukee Admirals and a brief stint in the ECHL with the Cincinnati Cyclones. He made his NHL debut during a brief call-up in 2013-14 when he appeared in one game with the Predators.

In 2015-16 he got one more NHL game, this time with the New York Rangers, and again the following season he’d be called up to New York for two games as an injury replacement. Before the start of the 2017-18 season, he made the jump to the KHL and started in China with the Kunlun Red Star.

China was hoping to compete in the Olympics but weren’t part of a top pro league, so the Red Star were born and joined the Russian KHL. China has never been a hockey hot bed.

“When I was there, that was the second season they had a team,” Hellberg said. “The hockey interest wasn’t that high in the beginning. We didn’t have that many fans, but I think it’s been growing and growing. And I think now there’s a lot more people playing hockey in China compared to a couple years.”

After four more seasons in the KHL – mostly with SKA St. Petersburg where he was traded after posting a .926 save percentage in Kunlun – he played one game in the NHL with Detroit last season and became a free agent.

He put up good numbers during his KHL playing years and felt the competition was good.

“I would say it’s the second-best league in the world after the NHL,” Hellberg said. “There’s a bunch of guys that are really skilled in the KHL who would easily play in the NHL. But obviously in the NHL, it goes a lot faster. Everybody overall is a lot better here. Of course, you can’t compare it to the NHL but KHL is right behind.”

As a free agent this summer he would eventually land in Seattle. He’s posted good numbers at every stop he’s played a full season and now joins the Kraken goalie group along with Philipp Grubauer, Martin Jones, and Joey Daccord.

“I had a couple teams interested in me, but Seattle took the lead,” he said. “When this opportunity came up for me it was a no brainer. I felt it’s a new organization, you can be part of something and build something special here. Heard that the fans are great.

“[My goals in camp are to] focus on myself, showcase who I am as a person and what I stand for as a goalie. Just trying to stop as many pucks as possible, and at the end of the day, I want to be on the roster here in Seattle.”

Hellberg says the relationship with the rest of the goalies is positive, and even though they’re all competing for a crowded net, they also push and cheer for each other.

Whether he makes the roster remains to be seen, but he already has won the goalie gear competition for the Kraken, and maybe the league. His pads, made by Brian’s Custom Sports, are as good as they come and have garnered league-wide attention.

They feature what appears to be a stretched-out version of the Kraken logo with the manufacturer’s logo set in where the red eye is.

“I’m really happy how they turned out,” Hellberg said. “I always do the design with the pads first and then I tried to match the helmet with my painter back in Sweden, and we kind of do it so everything matches. I like to have cool gear and obviously that’s one of the reasons I became a goalie, dreaming about getting your own set of gear… look good play good, right?”

Hellberg may be a long shot at making the Kraken roster but could end up in the AHL with Coachella Valley and give the Kraken always important goalie depth. If an injury does occur, there could be another call-up in his future.

Wednesday’s training camp sessions featured the Kraken doing a lot of work on the transition game. That included drilling on puck retrieval in their own zone, and there was a lot of five-on-five action.

There were some new line combinations as well.

“There’s some lines that we’ll leave together for a couple days that we want to see,” Kraken coach Dave Hakstol said. “We shifted today, and we’ll try to shift into some of these looks over the next three days and give them a game or two.”

Most notable of the new lines was in the morning session when Matty Beniers was playing with Andre Burakovsky and Jared McCann on the wings. In the afternoon, Oliver Bjorkstrand played with Alex Wennberg at center and Yanni Gourde on the other side.

Gourde, who did play a little wing last season, is familiar with the position and told the Sound Of Hockey podcast that he would play anywhere.

“Wherever he plays, he brings pace and tenacity,” Hakstol said. “He’s very comfortable playing both [positions] and most importantly, he’s willing to… It’s what you want to hear. There’s no big explanation or sit down needed in Yanni’s case, he’s just all into whatever the team needs.”

The Kraken announced roster moves on Wednesday and returned several junior prospects back to their respective teams.

Jagger Firkus was sent back to the Moose Jaw Warriors of the Western Hockey League. Fellow second-round pick David Goyette will return to the Sudbury Wolves of the OHL, and Tucker Robertson will go back to the Peterborough Petes. The North Bay Battalion get back Ty Nelson and Kyle Jackson.

Jacob Melanson, who received a two-game suspension from the NHL for his match penalty hit to the head against Edmonton on Monday, was returned to the QMJHL’s Acadie-Bathurst Titan.

“You want them to grow from their experience here,” Hakstol said. “I believe all of them did. All their experiences were maybe a little bit different, but they all had good opportunities just to be around this environment and this atmosphere. Kind of dip their toe in the water a little bit to see what is in their future now, and take that focus and go back to their to their own club and have a great year and be motivated from it.”