Battles and narratives to consider as Kraken open training camp 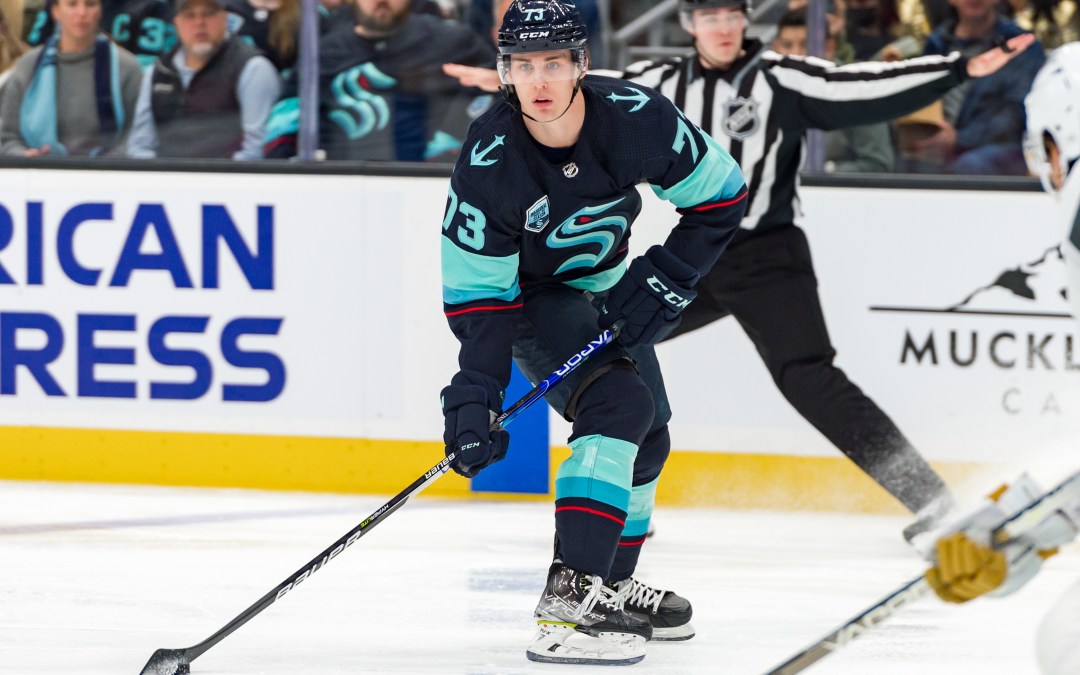 It’s here! It’s here! Seattle Kraken training camp has arrived! Earlier this week, we got a look at the rookies in the organization with a two-day precursor to the main event. But now the rubber meets the road, as the veterans officially join the action Thursday.

There were several key pieces added to the organization during the offseason, and with turnover comes narratives, as players compete for roster and lineup spots.

Here are some of the players, battles, and narratives to keep an eye on in Kraken training camp.

At the end of every NHL training camp, a handful of players gets placed on waivers by every club as front offices try to send guys through to their respective AHL affiliates. After the acquisitions made by Seattle this offseason, there are more NHL-caliber players in the fold than there are roster spots, so something has to give.

The Kraken will have to expose some NHL-level talent to waivers prior to the season opener. Who stays, and who goes?

Throwing a wrench into the plans of at least a fringe player or two is the arrival of Shane Wright, who has a good shot at making the roster as an 18-year-old. We will talk more about him in a bit, but just know that we do expect him to take up a roster spot, at least to start the season.

Those are all the forward spots the team has available, and that would mean four full lines plus two healthy forward scratches. The team typically carried one extra forward and two extra defensemen last season, but we expect that to change this season.

With all this in mind, if everything goes according to plan, there really are no spots for guys like Kole Lind, John Hayden, Alexander True, or Daniel Sprong, who is in camp on a professional try-out. We would also lump into this group Andrew Poturalski, who has been a prolific scorer in the AHL but has never gotten a real chance in the NHL.

Things never go according to plan, though, and even if all the regulars stay healthy through training camp, somebody will eventually miss time at some point during the season. So if spots don’t open for bubble players immediately out of camp, those guys will want to leave a positive impression to put themselves in line as the first call-ups.

Sending down a guy like Lind, who has upside and performed well in his end-of-season stint with Seattle last year, would be risky, as he could certainly be claimed by another team that’s willing to keep him in the NHL.

Similarly, the Kraken have more defensemen than they can fit on their NHL roster, though there is a spot up for grabs. We expect Vince Dunn, Adam Larsson, Jamie Oleksiak, Justin Schultz, and Carson Soucy to be shoo-ins, and Will Borgen stuck with the big club throughout the entire 2021-22 season, despite minimal playing time. So, pencil him in for the sixth spot.

But what about Cale Fleury, offseason signing Michal Kempny, and rookie Ryker Evans? Fleury is valuable as a right shot and did a good job for the Kraken at the end of last season. Kempny is a veteran that worked his way back from a series of horrific leg injuries and in 2021-22 played 15 games for the Capitals and 24 games for the AHL’s Hershey Bears. Evans had an awesome training camp before last season, then went back to the WHL’s Regina Pats and had a stellar campaign there, notching 61 points in 63 games.

Evans, 20, would benefit from time in the AHL, so it’s probably an uphill battle for him to make the club at this juncture, but we could see Kempny or Fleury filling that seventh spot on the blue line.

At first glance, the Kraken goal crease feels solidified going into training camp. Philipp Grubauer is the bona fide No. 1, and with Chris Driedger recovering from a torn ACL, the team went out and acquired Martin Jones on a one-year, $2 million contract this summer.

BUT… but… what about our good friend, Joey Daccord? We bring him up because for him to get to Coachella Valley at the end of camp, he will have to clear waivers. Does the team want to risk losing him?

At the end of last season, general manager Ron Francis indicated that Daccord would have a chance to make the team, but that was before Jones was signed. The smart bet to stick with the team is on Jones and his $2 million contract, but do pay attention to how Jones and Daccord perform in camp and in their pre-season outings.

Wright will remain a storyline throughout at least the first part of the regular season. Assuming he performs even reasonably well, we think he will break camp with the Kraken. The tricky thing here is that if Seattle doesn’t think Wright is ready to produce this season, or if he has a slow start out of the gates, he can be sent back to the OHL’s Kingston Frontenacs without burning a year of his entry-level contract. The team just has to make that decision prior to Wright playing in his 10th NHL game.

Thinking a few steps ahead, it would be a shame if, say, Lind gets waived and claimed by another team out of camp, then Wright plays nine games and goes back to the OHL. That is a real possibility and something to monitor as things develop.

The other thing to consider here is that Wright plays center, as do Beniers, Wennberg, Gourde, and Geekie. That’s too many centers, so somebody will have to slide to the wing. Lines will certainly shift around a lot during the course of the season, but do keep an eye on which of Gourde, Geekie, and Wright are lining up in the middle during pre-season.

It will be fun to see Burakovsky and Bjorkstrand in action for the Kraken. Those were two huge adds for Seattle this offseason, and getting a glimpse at how coach Dave Hakstol might employ them will be worth the price of admission for the pre-season games they play.

Tanev and Schwartz are both back and looking healthy, which is a huge boost to a Kraken club that slumped mightily after losing those players in the inaugural season. The group is much deeper with those two players available, plus Burakovsky and Bjorkstrand, meaning forwards that were in Seattle’s top six last year will be able to play down the lineup in third- and fourth-line roles this season (again, assuming good health).

On paper, the Kraken stand to be much better this year if they can keep their core players from getting hurt.

Training camp gets underway Thursday with on-ice sessions starting at 9:40AM at Kraken Community Iceplex. The team’s first pre-season game will be Monday against the Edmonton Oilers at Climate Pledge Arena.