After a roller coaster summer, Ryan Donato is ready to produce for the Kraken again 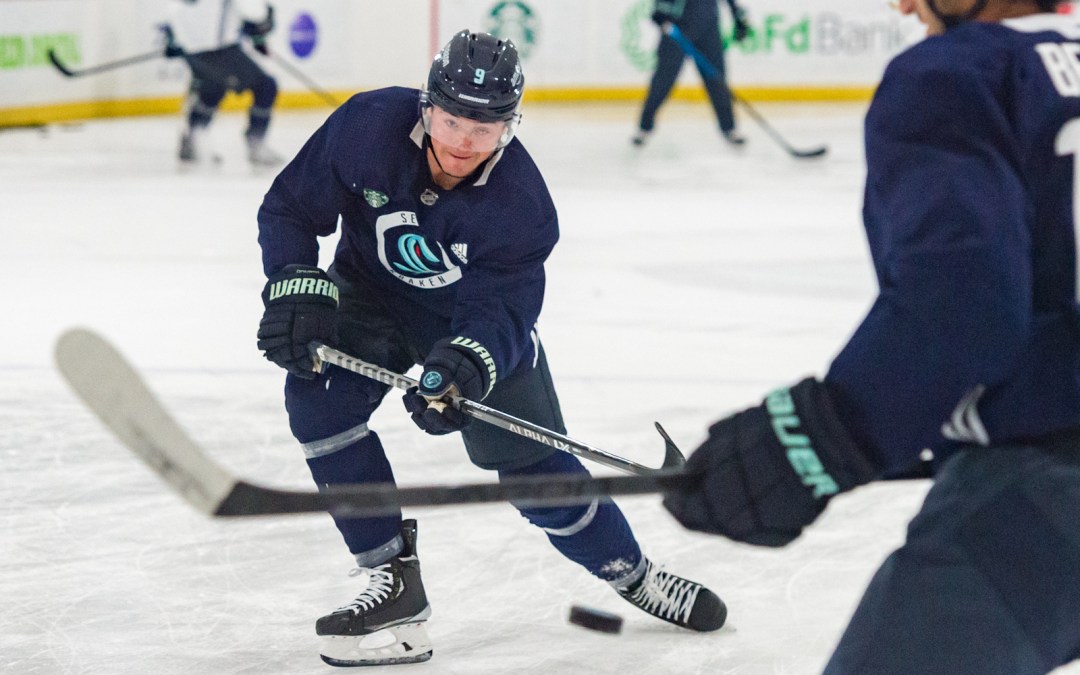 It was a roller coaster of a summer for versatile Seattle Kraken forward Ryan Donato. After a career year in 2021-22 that brought 16 goals and 31 points, and after bouncing to four NHL teams in six seasons, it seemed like he had found a home in the Pacific Northwest. But some unforeseen twists in his contractual situation made his immediate future murky, until he ultimately re-signed with the Kraken for one year and $1.2 million.

Now, on an improved Seattle team, early signs indicate he could once again play a big role.

Following the 2020-21 season, Donato’s contract with the San Jose Sharks was up. Due to his age and NHL service time, he remained a restricted free agent, meaning the Sharks could keep him as long as they extended him a qualifying offer. Surprisingly though, San Jose did not qualify Donato, instead allowing him to become an unrestricted free agent.

Just before their first training camp, the Kraken were able to sign the former second-round draft pick to a bargain $750,000 contract. It took time for Donato to earn the trust of coach Dave Hakstol—he was a healthy scratch for Seattle’s home opener—but by showing he could play up and down the lineup and produce in every role, he proved himself as an important piece of the puzzle.

“That’s the value of Ryan Donato,” Hakstol said. “That’s one of the big values he brings is the versatility and the willingness. That’s a big piece of it, right? A player being willing to jump in wherever he’s needed and compete at the highest level, no matter— it may be a little bit imperfect for him, but [Donato] was a great teammate last year and in that regard, whatever needs to be done, he would jump in and work hard to get what he could to the team.”

With that positive sentiment from his coach, it was surprising to learn at the end of the 2021-22 season that Donato had again not been tendered a qualifying offer, and was once again an unrestricted free agent.

“Obviously, it was disappointing,” Donato told Sound Of Hockey. “But I understand. I’ve been around long enough to understand it’s a business.”

Back where he wanted to be

When free agency opened in July, general manager Ron Francis indicated that the team had made the decision not to qualify Donato because they didn’t want to risk going to arbitration with him. Such a hearing could have resulted in Donato being awarded a contract that didn’t fit with Seattle’s cap plans. Francis did maintain at the time, though, that the front office liked the player and would leave the door open to re-signing him.

Donato explored the market, but lo and behold, he inked a new deal with the team on July 27. “I gathered myself a little bit before, knowing that whatever decision they make—qualify or no qualify—Seattle’s the place that I want to be at.”

In the end, Francis held true to his word, and the Kraken got back a forward they like on another team-friendly contract. “The way it was approached to me was that, I mean, ‘Obviously we didn’t qualify, but we want to stay in touch and figure out something,’” Donato recalled. “And that definitely made me excited.”

An exciting summer away from the rink

Donato trained in his home state of Massachusetts this summer, where he and training camp linemate Matty Beniers worked out together. Donato says Beniers worked hard this offseason to get bigger and stronger, which is no surprise, since the rookie recently shared that he gained 10-12 pounds of muscle.

Signing a new contract and working out with Beniers were just parts of the fun for Donato this offseason, though. He also proposed to his long-time girlfriend, Bradley, on the beach in his hometown of Scituate in front of friends and family.

“It was awesome,” he said. “I think it was long overdue, but she’s been amazing. She’s been a rock for me.”

If all goes according to plan, the two will be married next summer.

Donato is back in camp now, and things feel more familiar this time around than they did last year when everything was new for the expansion franchise. “Last year, you’re coming in and not everybody knows each other,” he said. “Everyone wants to make really good impressions—and still that’s the case, you want to make good impressions—but now guys got inside jokes. You got guys that are hooting and hollering, and there’s a lot more of a team feel here.”

It was the ability of Donato to play in all roles and situations that kept him in the lineup for 74 games last season. For him, it didn’t really matter what spot Hakstol had him in; he was just glad to have a chance to prove he belonged, and he took advantage.

This season, Donato is willing to do the same, but he also hopes he’ll get plenty of opportunities to produce offensively. “Whenever I’m put in a position to create offense or play with offensive-minded players, that’s when I feel like I’m going to be my best. Especially when I can gain some chemistry with guys and get some games together, and learn guys’ tendencies.”

So far in training camp, Donato has been seen slotted with Beniers and newcomer Oliver Bjorkstrand, a trio that could produce a lot of offense if they stick together.

Donato proved last season that he is an important piece of the Kraken roster. With an influx of offensive talent brought in during the offseason, it will be interesting to see how his role evolves. But by demonstrating throughout 2021-22 that he can help the team regardless of where Hakstol puts him, it is reasonable to expect Donato to again be a key piece to Seattle’s offense.

The Kraken will begin their preseason Monday at home against the Edmonton Oilers. They will open their regular season Oct. 12 in Anaheim, and their training camp will continue at Kraken Community Iceplex over the coming weeks.