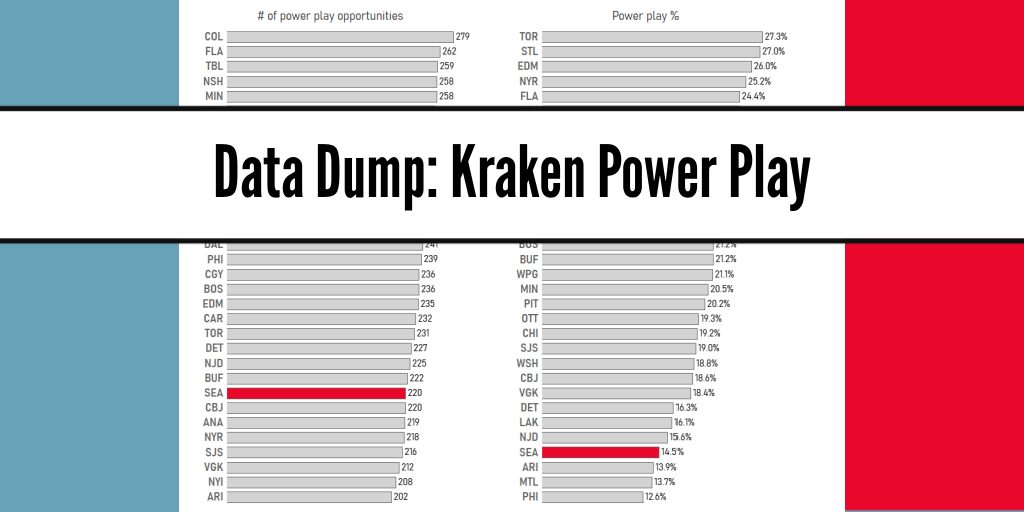 One of the biggest challenges the Seattle Kraken had last year was scoring goals. The Kraken ranked 28th in the league with only 213 goals scored for the entire 2021-22 season. A key component of this challenge was the lack of opportunity and success on the power play. In this edition of Data Dump, we are going to explore the information we have around Seattle’s struggles with the manpower advantage last season and how the team is addressing the issue.

The Kraken had the third fewest power play goals in the league last year with just 32 such markers. This ranked ahead of only the Philadelphia Flyers (30) and Arizona Coyotes (28). There are two components that go into logging power play goals, number of power play opportunities and power play percentage. Let us look at those two numbers from last season.

One explanation could attribute the lack of execution on the power play to the unfamiliarity the players had with each other in Seattle’s inaugural season. Unfortunately, when we look at the power play over the season, it ebbed and flowed but never showed a consistent improvement.

As we mentioned above, part of the reason for Seattle’s low power-play goals output is due to the lack of opportunities. To get opportunities, you need players that draw penalties, so let us look at who drew penalties for the Kraken last season.

One encouraging item that stands out is that the players that drew the most penalties on the 2021-22 Seattle Kraken remain on the team for the 2022-23 season. We can take the analysis one step further by looking at the players by minutes played versus the number of drawn penalties from last season. Plus, we can overlay the new Kraken players to get a more complete picture for this season.

In addition to Oliver Bjorkstrand and Andre Burakovsky posting above-average numbers in drawing penalties, we also believe Matty Beniers could be one of the team leaders in penalties drawn this coming season based on what we have seen during the preseason. His numbers from last year hint at this.

We already know the power play time taken by Mark Giordano, Calle Jarnkrok, and Marcus Johansson will need to be replaced.

Based on coach Dave Hakstol’s deployment during the preseason, we anticipate the changes to be more significant than just filling the vacancies left by those three players. The first power play unit is solid on paper, with Justin Schultz, Alex Wennberg, and the Killer B’s of Beniers, Bjorkstrand, and Burakovsky. The unit has not been remarkable during the preseason, but there have been moments where you can tell it will be just a matter of time before they really start clicking.

The second power play unit is still a work in progress, but looking at the remaining players on the roster, we like the options. Jared McCann, Jordan Eberle, Jaden Schwartz, Vince Dunn, and Yanni Gourde feels like the right combo to start the season with Shane Wright and Ryan Donato as options to slide in with those players.

Do not expect instant success when the season starts. Chemistry amongst players takes time, and when you consider the new faces on that first unit, we need to be patient for these players to develop that chemistry.

The Kraken will need to see improvements in multiple aspects of their game to expect a different outcome in season two. Behind goaltending, power play opportunities and production could be huge in deciding if Seattle plays meaningful games in March.

We think this chart sums up nicely the relationship between success on the power play and postseason aspirations.