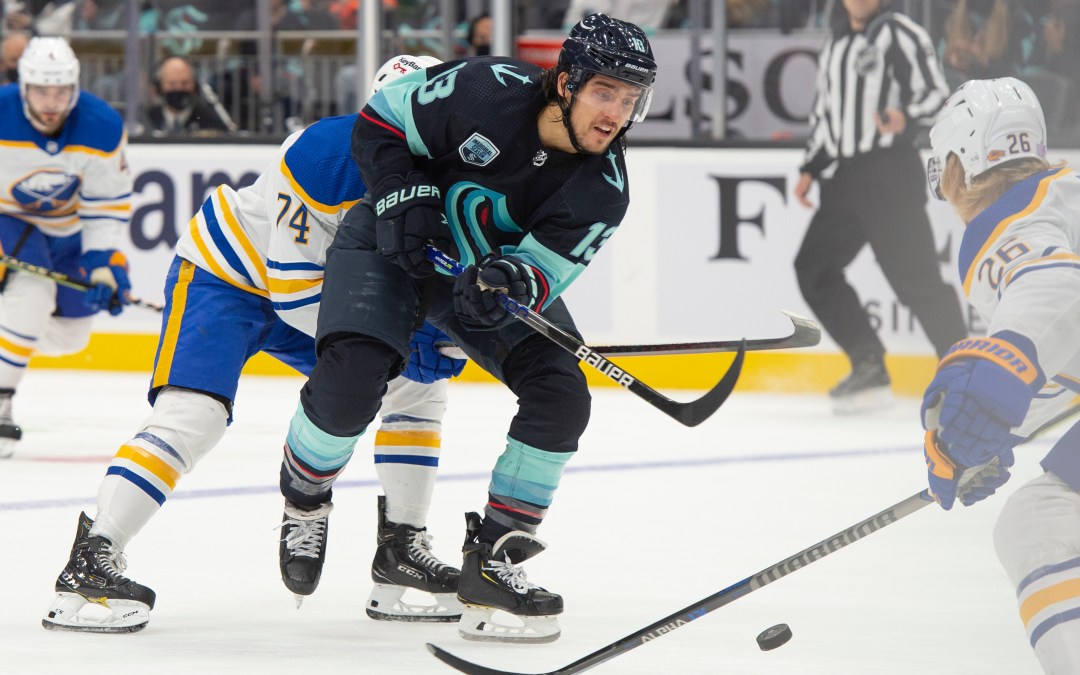 Tuesday was a fun night at Climate Pledge Arena for a variety of reasons. The Kraken looked good from top to bottom, but the fourth line of Daniel Sprong, Morgan Geekie, and Brandon Tanev was especially impressive. The power play also clicked twice, and Martin Jones was solid in net, turning away 15 of 16 shots to help lead Seattle to a 5-1 win over the Buffalo Sabres.

Also in this game, we had Sprong ripping Casey Fitzgerald’s stick out of his hands and throwing it across the Buffalo zone, Rasmus Dahlin catching the puck in his glove and throwing it halfway down the ice, and Kraken video coach Tim Ohashi successfully initiating an offside challenge. Like we said, it was a fun night.

Takeaway #1: Have the Kraken found a fourth line?

The “Shane Wright needs more ice time” crowd won’t love this take, but that’s the best a fourth line has looked for the Kraken… maybe ever. The combination of Tanev, Geekie, and Sprong was dangerous practically every time it was on the ice and was involved in three of Seattle’s five goals.

Sprong set up Jamie Oleksiak’s first goal of the season to get Seattle on the board early. A few minutes later, Tanev spotted Geekie streaking into the offensive zone and lofted a perfect high pass up and over Owen Power. The lob landed right on Geekie’s tape, and he raced in and extended Seattle’s lead to 2-0 with a beauty of a goal just 5:39 into the game.

“I called for it,” Geekie said. “[Tanev] yells at me all the time, so I figured I could yell at him back, and he heard me tonight.”

The line struck again in the second period when Tanev deflected a Vinnie Hinostroza clearing attempt, and the puck caromed right onto the stick of Sprong. With the Sabres expecting to get out of their zone, Sprong found himself in behind their defense with nobody around to even challenge him. He had all night to dangle and deke Eric Comrie out of his pads, and the Dutch forward made no mistake.

“Just a good bounce, hit Turbo’s skate, came right to me,” Sprong said. “And then, alone on the goalie, you make a fake, he slides, and you have a wide-open net. You’ll take those any day.”

Geekie and Sprong joined Oleksiak in scoring their first respective goals of the season. Geekie also set up a goal in the game against Chicago Sunday and nearly added a second goal late in the game Tuesday off a nifty pass from Sprong. Meanwhile, Sprong finished with a goal and two assists and first-star honors, and Tanev had two assists and was named the second star of the game.

Throughout the night, there was great chemistry from the fourth line. “We played in Edmonton that last pre-season game together, and we had some good looks,” Sprong said. “We can all skate, we’re big boys, and I thought our line really complemented each other tonight.”

“In that role, you’ve got to do a good job in a 200-foot sense, but for that group, they were able to contribute tonight offensively,” coach Dave Hakstol said. “That’s important for our group to have that depth in scoring.”

Hakstol doesn’t typically shuffle the lineup much after a good win, so we would not be surprised to see a similar look with this fourth line intact Thursday. “Our team needs to have depth,” he said. “That needs to be a strength of ours, and tonight that was a real positive for us.”

Takeaway #2: The power play is different this season

Though Seattle’s power play came up empty against Chicago on Saturday, it connected two more times against the Sabres to rise back up to a 29 percent conversion rate, good for seventh in the NHL.

“The power play’s been good all year,” Hakstol said. “We went out, and we generated and did a pretty good job.”

Hakstol pointed to the timeliness of Jared McCann’s goal at 16:07 of the second period. The goal gave Seattle back its three-goal lead after Dylan Cozens had gotten Buffalo back within two. The McCann marker all but sealed the game, even before the third period started.

The arrivals of Andre Burakovsky, Oliver Bjorkstrand, and Matty Beniers (for the full season) have been hugely helpful to the team’s chances with the man advantage. As a group, they look way more creative and way more dynamic than they ever did in their inaugural season. Last year, you almost never saw Kraken players connecting on passes through the seam, instead typically sticking mostly to the perimeter.

McCann’s goal came off a perfect seam pass from Burakovsky. With time to tee it up, McCann showed off his outstanding shot again, rifling it past Comrie for his fourth of the season.

Burakovsky has been especially noticeable in helping to move the needle on the power play. “Burky in that spot [on the right half wall] has been really good,” Hakstol said. “He’s got a couple different elements. He’s good on entry, which is a huge part of a successful power play. But he’s becoming a bit of a dual threat over there because he can shoot it from that spot on that flank, and he’s also showing that he can find seams and make plays through the box.”

The power play got on the board again in the third period after some quick movement around the left side. Sprong passed to Justin Schultz, who then went down low to Beniers on the right. Beniers got a good bounce off Lawrence Pilut for Seattle’s second power-play tally of the night and Matty’s third goal of the season.

Takeaway #3: Are these the Kraken we’re looking for?

Tuesday’s resounding win, in an odd way, is another example of why this team has been so perplexing in the early stages of this season. One could argue the Kraken have been the better team in all but two games, yet they have still only won three times.

In Tuesday’s victory against the Sabres, Seattle seemed to have learned from the mistakes it made against the Blackhawks on Sunday. “I think it’s just about falling into a lull,” Geekie said about why it has been tough for the Kraken to hold onto leads. “You start cheating a little bit, get away from your game. I think tonight, maybe a couple shifts we had that, but it was maybe one shift here and one shift there, and then we got back on track.”

It feels like the Kraken are on the cusp of going on a nice run. They’re now 2-1-1 in their last four, and they absolutely should have won against Chicago but frittered that one away with costly mistakes.

When they’ve avoided allowing mistakes to compound on one another, they have won. Can they continue to limit those mistakes for the remainder of this homestand? Or will costly turnovers and defensive lapses return in the next couple games? Which team is the real Seattle Kraken?

Hakstol was asked again about Wright’s usage, as the 18-year-old rookie played under six minutes Sunday and was a healthy scratch Tuesday.

Here’s what Hakstol said: “[Wright] played a good game in Colorado. We got him a few more minutes there, he did a good job. The game in Chicago didn’t go the way we wanted it to, but that’s not indicative of one individual player, and certainly not just Shane. We had a real good work day with Shane [Tuesday]; we’ve got a good plan moving forward.”

We did see Wright doing extra skills work with Kraken staff long after morning skate ended Tuesday, so that checks out.

“You know, it’s all about making small progress,” Hakstol added. “There’s no big, huge leaps and bounds that we’re looking for. We’re looking for great work and slow progress and continued progress, and that’s the biggest thing for us.”

If the fourth line of Geekie, Sprong, and Tanev keeps playing together and keeps performing the way it did Tuesday, it may be a couple games before we see Wright back in.