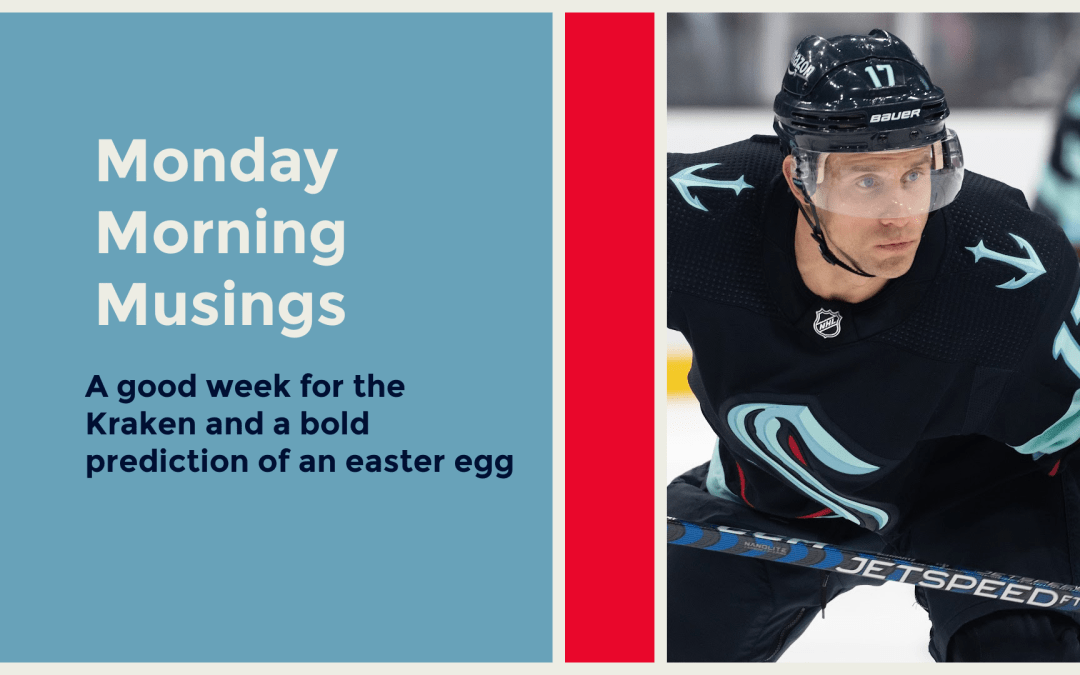 This week was a stark reminder that this Kraken team is a different unit from the one they iced last season. It was more than winning two out of the three home games, it was how they did it that convinced me this season is different.

On Tuesday, the Kraken dominated the hot Buffalo Sabres in a 5-1 win at Climate Pledge Arena. They were unrelenting all game with contributions from the fourth line as Daniel Sprong and Morgan Geekie scored their first respective goals of the season. The Kraken allowed Buffalo just 16 shots all game while blocking a season high 17 shots. It was a convincing win the team needed after squandering a game they should have won in Chicago just two days earlier.

Thursday had all the makings of one of those “trap games” and, well, it was. The Kraken had the dubious honor of handing their division rival Vancouver Canucks their first win of the season and remained winless in five games against the neighbor to the north. Even in the loss, the Kraken dominated the shot count, outshooting the Canucks 36-19. Two of Vancouver’s goals took auspicious bounces for the Canucks, but we’re not going to blame the bounces for every loss, so give Vancouver credit. The Canucks were a hungry team and found a way to win, even if they were not the better team on the ice.

On Saturday, the Pittsburgh Penguins came in hungry after losing three games in a row on their Western Canada road trip, but the Kraken were ready. It was a tightly contested, scoreless game throughout the first thirty minutes until it appeared the Kraken broke the ice with a Ryan Donato tap in off a good Jordan Eberle rush. After a Penguins challenge, the play was deemed offside and the goal waived off. Shortly after that the Penguins got on the board. Jake Guentzel made an excellent read of a cross-ice pass from Jamie Oleksiak in the Kraken offensive zone that Guentzel took the length of the ice to beat Martin Jones five hole. The Kraken battled back and appeared to tie the game just mintues later on an Andre Burakovsky shot, but again the Penguins successfully challenged a missed stoppage for a high stick and the game stayed 1-0 Penguins.

Tension was on the rise in the crowd at this point. You could feel it. Goals were so hard to come by last season. It would have been unthinkable to overcome adversity like two disallowed goals. But this team has a different gear on offense. This Kraken team responded on the very next shift with a goal from new dad Jordan Eberle (more on that below), and added another later in the frame to skate into the intermission with a 2-1 lead. The Kraken then killed penalties and weathered a barrage of shots in the third period to secure the win.

HOW DO YOU DO, ANDREAS ATHANASIOU!! 🥵 pic.twitter.com/zylsZUsHTq

The Flames are expected to be one of the top teams in the Pacific Division and maybe the league. They have played just seven games but have wins against Edmonton, Vegas, and Colorado just to name a few. This will be a big test for the Kraken. Grabbing a point on Tuesday would be considered a major win, but like the Colorado game, I want to see how they play against one of the better teams in the league. Will they get chased out of the building or will they compete?

Minnesota started cold but has heated up a bit and will be a challenge for the Kraken. Marc-Andre Fleury has settled in after a challenging start to the season. He has three wins in his last four starts with a save percentage of .927 over those games. On the surface, this game might not seem any more significant than any other, but the Wild might be the team the Kraken are fighting with for a wild card playoff spot come March. The Kraken need three points on this road trip, and the Wild might be the easiest matchup to grab two.

At times last Saturday, the Penguins looked like the better team on the ice, and they will be looking for revenge. The Penguins will not be playing the Kraken on the second night of a back-to-back so it is probable that Seattle could be facing starter Tristan Jarry.