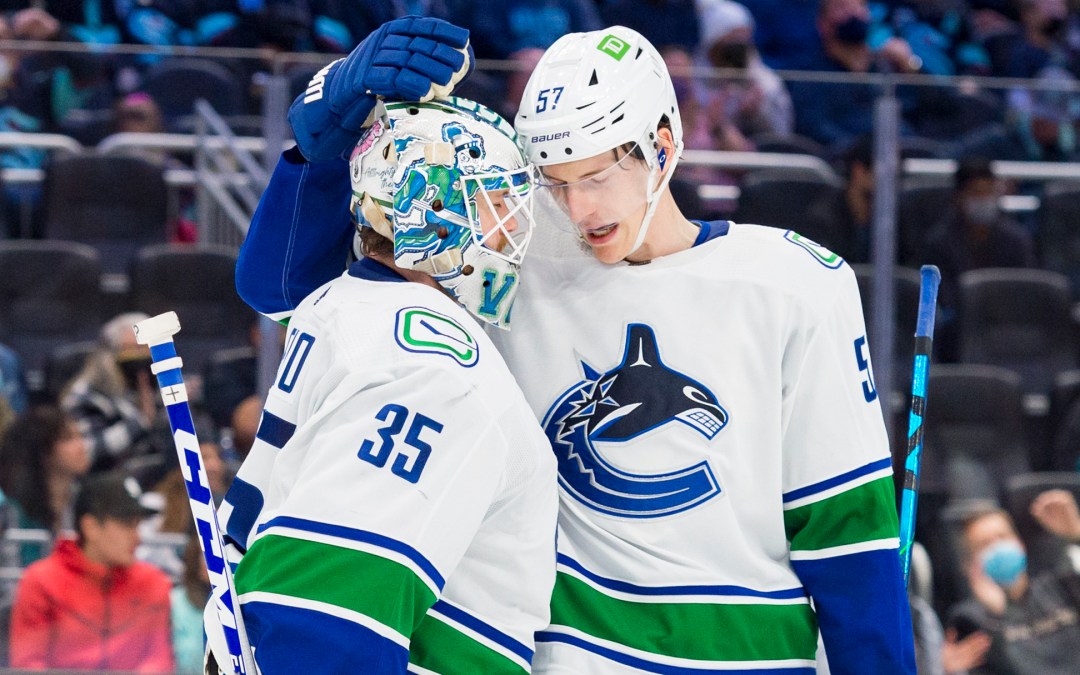 A wise admiral once said, “It’s a trap!” That’s exactly what Thursday’s home Kraken game was against the previously winless Canucks. Vancouver came in determined to do everything in its power to finally put something in the ‘W’ column in the standings. Not only that, Seattle went 0-4-0 against that team in its inaugural season, so we knew coming in that a loss—even against a seemingly hapless opponent—was a real possibility.

A good example of Vancouver being willing to do whatever it took to get a win Thursday, JT Miller laid down in front of an Andre Burakovsky shot with two seconds left on the clock in the third period. The shot hit Miller in the ankle, and he couldn’t put any weight on it as the horn sounded. His teammates mobbed Miller to congratulate him for the unselfish play before realizing he was injured and giving him space. That’s who the Kraken were up against.

To Seattle’s credit, it was the better team for most of the night but was done in by two bad bounces and a tough game on special teams.

Here are our Three Takeaways from a disappointing 5-4 Kraken loss to the Canucks.

Aside from multiple fights—which we’ll get to shortly—the opening period was eventful in general. Vancouver got its first of two fortunate bounces after a nothing shot from the corner hit the blocker of Martin Jones, then Justin Schultz, and landed right on the stick of Ilya Mikheyev. Mikheyev made it 1-0 at 4:38.

In the third period, Luke Schenn sent a soft shot toward the net, which Carson Soucy knocked out of the air with his stick. But the puck bounced off the ice, came right up for Elias Pettersson, and Pettersson batted it past Jones to give the Canucks the lead for good.

“Five on five— you know, you’re not going to be able to carry momentum all night, but we carried momentum for a lot of the night,” coach Dave Hakstol said.

He was right. Seattle outshot Vancouver 36-19 and had 58 percent of the expected goals for (xGF), so it certainly stings for Kraken fans to see their team leave without any points. It stings more knowing Seattle had bad puck luck, and the loss came against a close geographical rival that was reeling and winless.

Takeaway #2: …And a tough night for special teams

Jamie Oleksiak and Jared McCann scored in quick succession at the end of the first period to give Seattle a 2-1 lead heading into the dressing room.

But two power-play goals against in the second period helped the Canucks get through 40 minutes with a 3-3 tie and gave them a chance to steal two points.

“We were the better team for most of the night,” Hakstol said. “But they beat us on specialty teams by one, and that was ultimately the difference in the hockey game.”

Seattle had gotten through the first minute of each of the two respective kills that cost it the game. In both cases, Karson Kuhlman had chances to clear, but he couldn’t get the puck out of harm’s way.

On the first one, Kuhlman broke up a pass but lost the puck in his skates. Sheldon Dries dug it out and found Mikheyev, who slipped it through Jones for his second of the game.

On the second power-play goal against, Kuhlman fired a clearing attempt up the wall, but Pettersson cut it off. The Kraken couldn’t recover before Miller connected with Andrei Kuzmenko for an easy tap in.

“It was a matter of finishing,” Hakstol said of the PK. “We did everything right, except we didn’t get the clears, and maybe on that second one, either a clear or a save, and that makes all the difference.” Seattle’s PK has become a problem and is now 31st in the league with just a 64.5 percent success rate.

Speaking of “a save,” it wasn’t the best night for Jones, either, who stopped just 14 of 18 shots. The goalie has to be your best penalty killer, and he wasn’t able to bail out his teammates enough times. We thought in the first period that although Jones had only given up one goal, he didn’t seem to be tracking the puck especially well. He was getting away with it at first thanks to good positioning and limited chances, but Vancouver managed to sneak a few shots past him during the course of the game.

There are nights when goalies just don’t see and track the puck as well as they do on other nights for whatever reason, and we think Thursday was one of those for Seattle’s netminder.

Jaden Schwartz did register a power-play goal to draw the Kraken back within one after Conor Garland had scored an empty netter, but that was too little too late. The Kraken are now on pace for 92 power-play goals this season after registering just 32 last season.

Takeaway #3: The boys came out swinging

When you’re playing a desperate team that had your number the previous season, and that team happens to play its home games just 140 miles north of your arena, it’s easy for things to get a little feisty. On Thursday, both teams literally came out swinging.

“It’s hockey,” Hakstol said. “There was good intensity out there, and our guys were ready to go.”

Before four minutes had elapsed, two fights had already broken out; one between Adam Larsson and Tanner Pearson after a heavy hit by Larsson, then another between Carson Soucy and Miller.

“They came out and I think wanted to send a message and fought two of our guys,” Matty Beniers said. “I thought we had a good start, but it was a physical game, and you could see it right from the get-go.”

Morgan Geekie also ended up in a rare scrap with Kyle Burroughs after the Kraken forward threw a heavy hit behind Vancouver’s net.

Canucks coach Bruce Boudreau recorded his 600th career victory. He very comically had to pause his post-game press conference to let out a big sneeze.

The Kraken will play again at home on Saturday against the Pittsburgh Penguins.