Down two in third period, Kraken storm back for a 5-4 win over Flames in Calgary 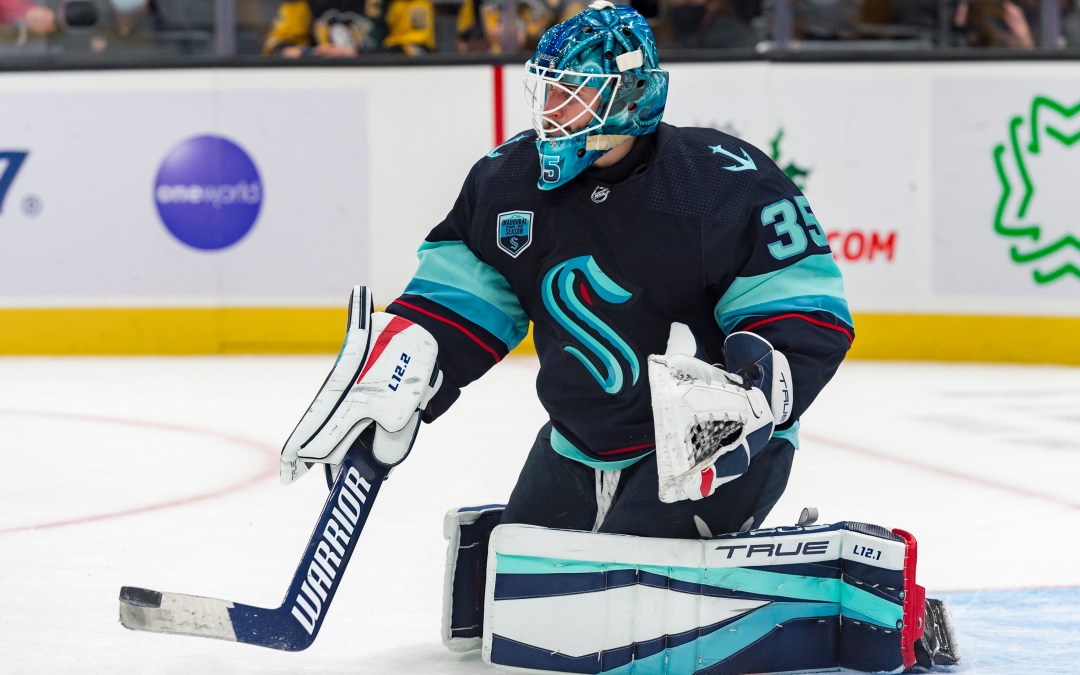 They gave up two goals in 17 seconds early in the third period in a tie game, and it looked like a frustrating loss was in order for the Seattle Kraken. But not this night. Not this season. Instead of folding the cards, the Kraken stormed back to score the next three goals and beat the Calgary Flames 5-4 at Scotiabank Saddledome on Tuesday.

The heroes were aplenty, starting with goalie Joey Daccord, who was making a last-minute start and kicked out 36 shots. It was his second NHL win, first for the Kraken, and came in his first start of the season.

“Hockey’s a crazy game, it was a nuts game,” Daccord said. “You give up two quick in the third and its 4-2 you think ‘that’s probably it.’ Just an amazing effort out of our team and I think it shows the character we have in this room to battle back like that. Our PK was awesome all night, blocking shots and making my life easy… a huge character win for us and I’m just happy to be part of it.”

Yanni Gourde scored his first of the year, a short-handed goal, to tie the game, and Matty Beniers scored his fifth to win the game for the Kraken (5-4-2) who have won back-to-back games for the first time this season.

It was looking bleak

After surviving a second period where they were outshot 20-8, the Kraken left tied 2-2, but the Flames (5-3-0) struck early in the third.

“We were able to right the ship a little bit in the second, the last eight minutes,” Kraken coach Dave Hakstol said. “To start the third, we give up a quick face-off goal and then a little miscue coming out of the zone up the wall. Those are the kinds of plays that will get you beat… we showed really good resiliency to find a way back in the game.”

Calgary took a 4-2 lead in a matter of 16 seconds on goals from Tyler Toffoli and Trevor Lewis starting at 1:51 of the period. It was a script that played out numerous times a season ago. Seattle would give up goals to fall behind and lacked any firepower to come back.

The comeback started at 8:31 when the Kraken were on the power play, and Daniel Sprong scored after Alex Wennberg found him down low with a cross-crease pass. It cut the lead to 4-3 and was Sprong’s second of the season.

Gourde tied it up while killing a penalty at 11:26. He stripped the puck in the neutral zone, picked it up, and snapped a quick shot that Flames goalie Dan Vladar, who made 21 saves, couldn’t stop.

“I don’t read anything,” Gourde said when asked what he saw on the play. “ I close my eyes, honestly. I saw low blocker, that’s usually my shot, I just took it and it worked.”

The game was tied at 4-4. Exactly two minutes later, Jordan Eberle led a jailbreak Seattle rush and found Beniers across the ice and buried it, top shelf for what would be his first NHL game-winning goal.

“I was fired up” Beniers said about seeing Eberle with the puck. “I was smiling skating down the ice because he’s dangerous with the puck no matter what he’s going to do. He ended up making a perfect play, gave me the open net on the back side.”

How it got there

Carson Soucy opened the scoring at 14:58 of the first period when he jumped into the zone and swept a wrister from the face-off circle for his first goal of the year.

The Flames started the second period pushing the pace and tied the game, 1-1, when defenseman Nikita Zadorov crashed the net and Toffoli fed him with a cross-ice pass for a tap-in goal at 6:28 of the period.

Nazem Kadri gave the Flames the lead moments later at 8:14 when he attacked the net and was initially stopped by Daccord. However, the puck rebounded right back to Kadri who flung it over Daccord for his fifth goal of the season. Seattle challenged the play for goalie interference. The replay did show that Kadri’s skate brushed Daccord’s pads when he skated through the crease, but it was deemed not to have interfered with Daccord’s ability to make the save. The goal made it 2-1.

Morgan Geekie continued to stay hot and scored for the second game in a row to tie it 2-2 at 13:10. The puck was stolen by Jamie Oleksiak at neutral ice, which developed a mini two-on-one rush. He slid the puck to Geekie for the score.

Coming into Tuesday’s contest, the Kraken penalty kill was a mess. They were third worst in the league, but against the Flames, Seattle killed off all four power plays they faced and were one for four themselves. Gourde’s short-handed goal was a boost as well.

“The PK was good all night. They were moving together, we did a better job holding the line, maybe than we’ve done all year,” Hakstol said. “On the power play, we weren’t sharp tonight. Weren’t getting in the zone clean… but the bottom line with the power play is that if you stick with it and get one at a critical time, you’ve done a great job, and we did that.”

Soucy and Gourde scored for the first time this year meaning the Kraken have had 19 different players score a goal this season. That’s the most in the NHL. Seattle is getting widespread scoring, but with Soucy’s goal, every defenseman who has played a game for the Kraken this season has scored. That’s also the best in the league so far.