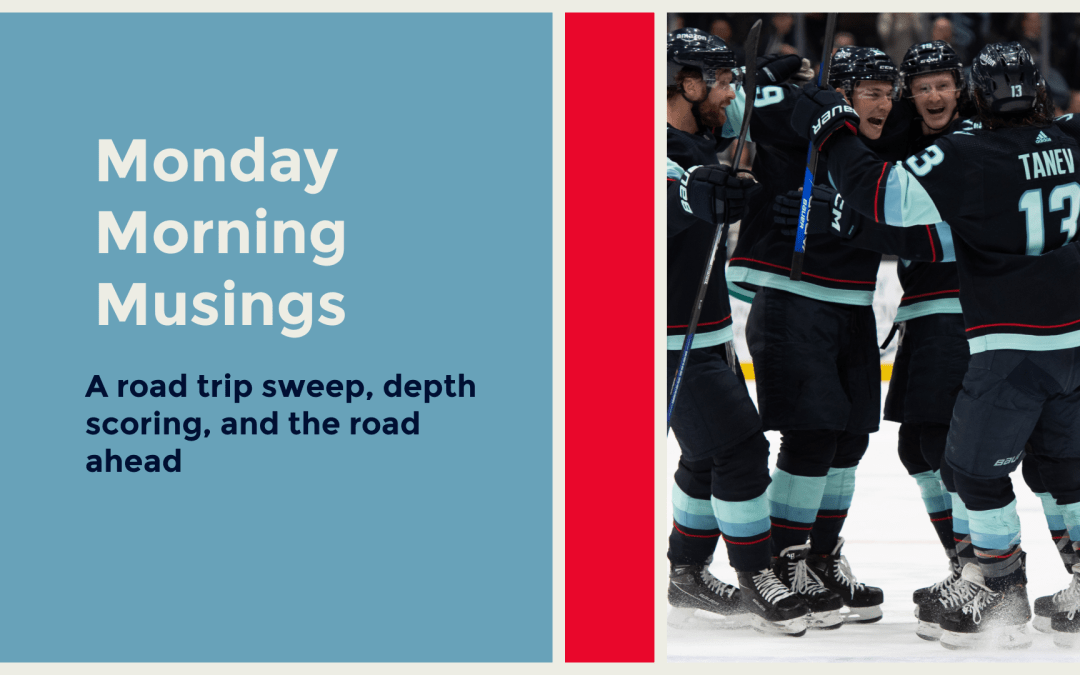 What a week for the Kraken?!?! Three regulation road game victories against some quality opponents. Each victory seemed to build on the previous one, and suddenly, the Kraken see themselves in second place in the Pacific Division and riding a franchise record four-game win streak. The Kraken now have 16 points in the standings over 13 games. Last season, they did not capture their 16th point until their 21st game of the season.

The boys will now play a six-game homestand that will take us right through Thanksgiving. They are currently 2-3-1 at Climate Pledge Arena versus 5-1-1 on the road. Let us hope they can get some CPA mojo and turn that home record around.

I’ve said this many times before, but this team is very different than last year’s team. The ability for this group to bounce back after something goes wrong has been remarkable. In Tuesday’s game against Calgary, the Kraken rallied from two goals down in the third after giving up two quick ones to the Flames. In the game against Pittsburgh on Saturday, Jake Guentzel scored an equalizer for the Penguins, but the Kraken bounced back with a Tanev goal with roughly three and a half minutes left. Those kinds of responses were few and far between last season.

One thing that has helped with the resilience is this team is scoring at a much higher rate than last year. The Kraken are averaging 3.46 goals per game compared to 2.63 last year. Goal scoring in the NHL is challenging, but last year it seemed as if the team would need to work so hard for every goal. Right now, it just seems like anyone out there can score. 19 of the 20 skaters that have drawn into the lineup have scored a goal.

The only skater to not score a goal is Shane Wright. Wright has the fewest minutes played among the 20 players with just under 57 minutes over his seven games. The challenge with getting Wright more minutes is the players that are drawing into the lineup are better NHL players than he is right now, being that he’s still just 18 years old. Morgan Geekie, Ryan Donato, and Daniel Sprong give the Kraken a better chance to win hockey games.

The other “problem” that is preventing Wright from drawing in more consistently is that the Kraken have been relatively healthy. Seattle has not had to dip into the Coachella Valley Firebirds for any skaters to date. Last year’s team had several injuries and COVID absences in the first part of the season. Colin Blackwell, Yanni Gourde, Calle Jarnkrok, and Jared McCann all missed several games in the first part of last season.

McCann being sidelined on Thursday and Saturday gave Wright the opportunity to not just play but play on the third line with Gourde and Tanev.

I have mentioned this several times on the Sound Of Hockey Podcast, but assuming no injuries between now and early December, I imagine the Kraken will loan Wright to Team Canada for the World Junior Championship. This will give him the opportunity to play a couple weeks of logging high minutes of elite-level hockey. At the end of the tournament, he can then return to Seattle for rest of the season.

Gourde with the steal and shorthanded tally to tie it up.#SeaKraken pic.twitter.com/CUkqJCBx6y

Heading into the season, I thought the Predators were one of the teams the Kraken would need to challenge for a playoff spot. This team is tough to figure out; they are rolling into Seattle with a bit of a hot streak, having beaten the Flames and Canucks, but prior to those games they lost two lopsided contests to the Oilers and Capitals.

After an embarrassing 4-0 loss at home to the Kraken last Thursday, the Wild will be looking to return the favor at CPA. It is hard to get a read on how good the Wild are this year, as they have been rather inconsistent through their first 11 games. Most of the media had them pegged as a playoff team, but with the emergence of Winnipeg, there could be some doubt.

The Jets have gotten off to a sneaky good start to the season and will find themselves in a playoff spot if they can keep this up. If they cool off a bit, the Jets and Kraken could be fighting for a Wild Card position in March.