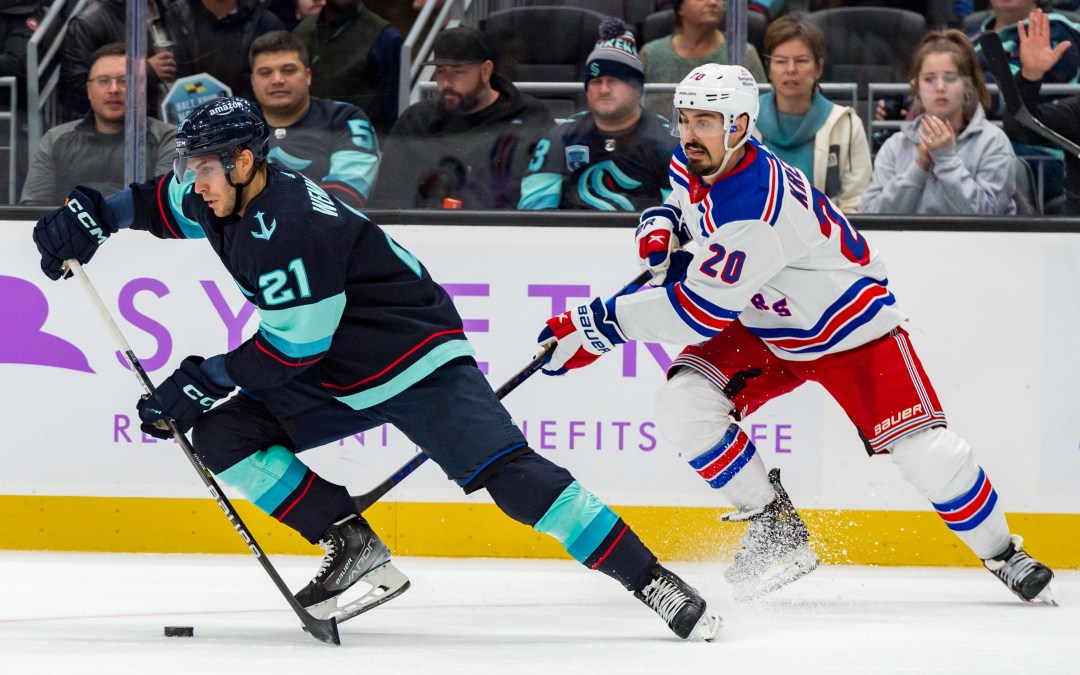 When Carson Soucy took a penalty at 17:04 of the third period, and the Rangers pulled their goalie to give themselves a six-on-four advantage over the Kraken, things suddenly felt uncomfortably familiar. When Vincent Trocheck banged home a loose puck to tie the game at 2-2 with under two minutes left, it brought on a nasty sense of deja vu.

That is almost exactly how Seattle’s previous game Sunday against the Winnipeg Jets had played out. That one ended early into the overtime period after Andre Burakovsky tried to force a play in the offensive zone, leading to a Jets goal at the other end.

This time, though, Seattle looked better prepared and had learned its lesson about overtime. The outcome was a thrilling 3-2 win over the New York Rangers on Hockey Fights Cancer Night. It gave the Kraken their first points ever against the Blueshirts and points in eight of their last 10 games.

Here are our Three Takeaways from an exciting and emotional night at Climate Pledge Arena.

Takeaway #1: Justin Schultz was the star of the show

Justin Schultz was signed in the offseason to be a puck-moving defenseman that could chip in offensively from time to time. He did just that Thursday and ended up as the night’s No. 1 star. With the game level at 1-1 and deadlocked in a goalie duel, it was Schultz that finally broke through against reigning Vezina Trophy winner, Igor Shesterkin at 9:27 of the third.

Seattle hadn’t scored since 2:45 into the game, and Shesterkin had been outstanding. But after Burakovsky circled the wagons and passed to Schultz at the blue line, the defenseman walked the line and got a shot through traffic. It appeared to change directions off a Ranger player or two and ultimately eluded Shesterkin to give the Kraken a 2-1 lead.

After the Kraken gave up the tying goal late in the third (more on that in a bit), it was again Schultz who got Seattle over the hump in overtime and sent the fans home happy. Jordan Eberle drove around Artemi Panarin and shoveled a shot into Shesterkin’s pads. The rebound squirted across for a crashing Schultz, and he made no mistake, slapping it past Shesterkin.

“It’s just a good offensive play, and a lot of times that’s how it happens, right?” coach Dave Hakstol said. “It’s a dirty rebound, and Schultz is right there to punch it in.”

While the late tying goal with Soucy in the box and Seattle facing a six-on-four felt eerily similar to Sunday, Seattle got a nice pushback in the closing minutes of regulation that made this game feel slightly different. The Kraken didn’t score before the horn, but they did get some great looks to regain confidence and momentum going into the overtime frame.

When the three-on-three session began, it was quickly evident the Kraken had changed their overtime strategy.

The improvement wasn’t by happenstance. After Seattle lost to the Jets in overtime Sunday, the third time it had lost in as many OT tries this season, the team went to work practicing that scenario. We saw the team do a controlled three-on-three scrimmage Tuesday, and they were spotted doing similar work Wednesday.

“The three games that we lost were a little bit all over the place,” Schultz added. “We just sat down and practiced it, and I thought you noticed it tonight. We did a much better job.”

Jared McCann, who scored the game’s first goal, also credited the win to Seattle’s three-on-three practice this week. “We felt more confident going into it,” he said. “We made some plays, but we were smart with the puck.”

The biggest difference was Seattle’s willingness to take the puck backward and regroup. If nothing was available to them offensively, they circled to the neutral zone, got a line change with possession, and went back to work. That’s how you win in overtime.

The Kraken are a perfect two-for-two in their history at getting us choked up and teary eyed on Hockey Fights Cancer Night. Thursday’s game was emotional. Friend of the Sound Of Hockey Podcast and frequent anthem singer for the Seattle Thunderbirds, Paul Klein, got the call to sing before the game. Paul has recently recovered from throat cancer, and we can tell you he is one of the nicest guys we’ve ever met.

Joined on the ice by his oncologist from Virginia Mason Hospital, Klein sang the Star Spangled Banner like the pro that he is. He looked like he was fighting back emotions of his own as he sang, but the crowd inside Climate Pledge Arena gave him a little extra help, and he even got a big “GO PAUL!” from somewhere in the 200 level.

“This night was a culmination of how supported I felt during my treatment and care at Virginia Mason,” Klein said. “To have my doctor next to me as I sang at a regular season NHL game with my hometown team was incredible, in the truest sense of the word. I have never felt so loved, as I poured my heart into an anthem that I’ve sung at least 700 times over the last 30 years. It was overwhelming.”

Klein said the first person he saw when he came off the ice was Kraken CEO Tod Leiweke. “[Leiweke] stared at me with his mouth open and then stretched out his arms and held me,” Klein said. Leiweke told Klein, “Paul, I don’t think I’ve ever heard a more beautiful anthem.”

Kraken game ops didn’t stop there. In the first period, Eddie Olczyk introduced the night’s “Hero of the Deep,” Julie Self, who sadly passed away from cancer recently. Self was a huge Kraken fan and used her love for the team to help her through some of the hardest parts of her fight. Eddie started his presentation by saying, “Hi Kraken fans, I’m Eddie Olczyk, a stage-three colon cancer survivor.” On behalf of the Kraken, Olczyk then presented $32,000 to charity in Julie’s honor and welcomed members of her family to the game.

Midway through the second period, Olczyk was again featured in a heartfelt video interview in which he talked about how important his support system was in getting him through his own battle. “It’s ok to feel scared, it’s ok to feel sorry for yourself,” Olczyk said in the video. “But you gotta fight. You gotta believe.”

After the game, Yanni Gourde and Joonas Donskoi were seen touring kids with the Make-A-Wish Foundation around the Kraken dressing room. “You really can’t put it into words,” Hakstol said, on the importance of the night. “I mean, we’re fighting a battle in here to win a hockey game, but the perspective of things in life— we were fortunate to have a few young kids that were here on Make-A-Wish, and just everybody that’s involved in Hockey Fights Cancer Night, it’s such an important night. It’s such an important recognition for everybody; not only the individuals, but the families that are dealing with and working through the process of fighting cancer.”

Cancer has touched everyone in some way, and it truly is a heartwarming experience to feel the love and support that people give one another on Hockey Fights Cancer Night.

Now, if Kraken game ops could kindly leave our tear ducts alone, we would appreciate that.