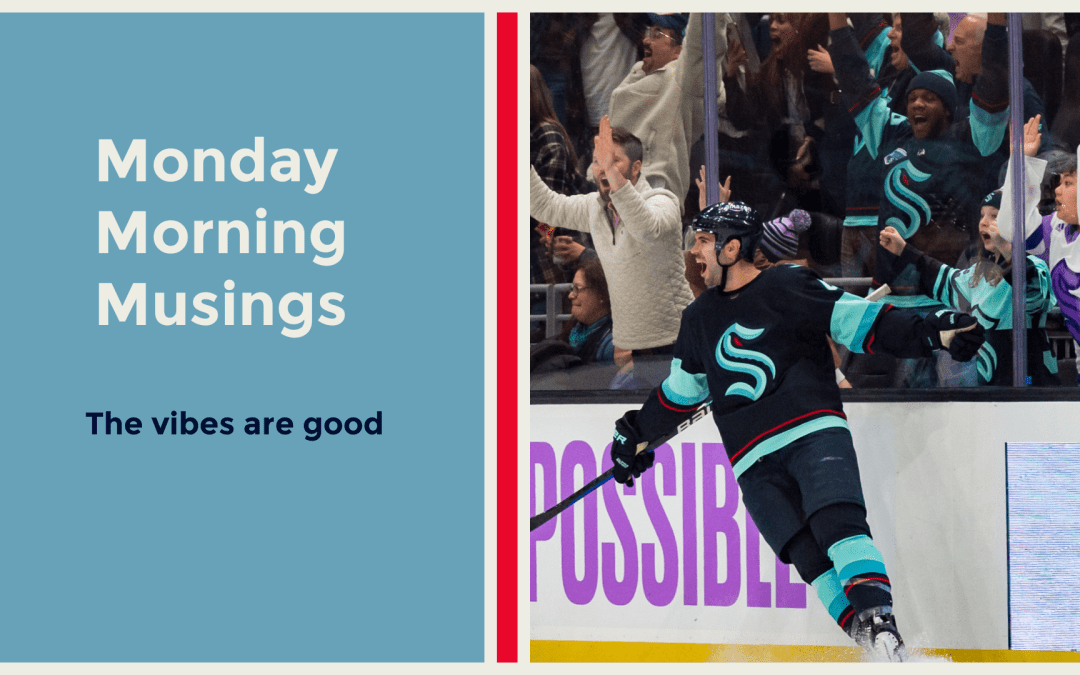 It was another big week from the Kraken as they captured four out of four possible standings points with two overtime wins against quality opponents. On Thursday, the New York Rangers visited Seattle and tied the game with under two minutes left while the Kraken were on a penalty kill. The overtime period featured a completely different strategy to three-on-three that we have not seen before. The Kraken were very patient and did not force any shots. They had only two shots in overtime and one of them was a game winner from Justin Schultz. In overtime, it is always about the quality of the shots and not the quantity.

This was the Kraken’s first ever win against the New York Rangers and the first overtime win of the season. There have been some fun and amazing games at Climate Pledge Arena this season, but this one might have been the best to date.

The Los Angeles Kings visited Seattle on Saturday night in one of those benchmark games where you just want to see how Seattle stacks up. We have been bullish on the 2022-23 Seattle Kraken, but you still want to see how they compare against a quality division rival. It was another very tight, quality game for both teams. The third period featured a short-handed goal against the Kraken with an immediate response power-play goal for Seattle that tied it up in the third. Jordan Eberle would snipe the overtime winner two and a half minutes into overtime. Eberle’s goal was the only shot the Kraken had in overtime. Again, quality not quantity.

The Kings remain ahead in the standings, but it is only because they have played more games than the Kraken. Here is the current pace of the Pacific Division.

I believe this team is a playoff team, but I also recognize there a lot of games left in the season. The key is banking points early and often, because like all teams, the Kraken are bound to go through a rough patch at some point. Banking points now allows them to weather those rough patches down the road.

Shane Wright has been sent down to the Coachella Valley Firebirds on a 14-day conditioning assignment. We talked about it on the Sound Of Hockey podcast last week, and I mentioned it in last week’s column. This is kind of a loophole in the NHL-CHL agreement where an otherwise ineligible player can be sent down to the AHL on a conditioning assignment, provided that player had been healthy scratched for five games in a row. Saturday’s game against the Kings was Wright’s fifth straight game that he had been a healthy scratch.

The #SeaKraken have reassigned forward Shane Wright to the Coachella Valley @Firebirds on a conditioning loan. pic.twitter.com/e0NZxHit82

This is an excellent opportunity for Wright to get some quality playing time against players that are more comparable to the skill he will face in the NHL. In short, he belongs in the AHL but the NHL-CHL agreement prevents this from happening. The Firebirds schedule will have five games over the next 14 days. Here are the games Wright should play in over that stretch:

Once Wright is done with his conditioning assignment, I would expect him to draw into a game or two. Then, assuming no substantial injuries with the Kraken, I expect the Kraken to loan him to Team Canada for the 2023 World Junior Championship that kicks off Dec. 26. Team Canada training camp starts in mid-December.

The two Kraken games were not the only hockey played at Climate Pledge Arena this week. On Sunday, CPA hosted Game 3 of the USA-Canada Rivalry series between the two women’s national teams. I have raved about this rivalry for years and to see a game in Seattle was another surreal moment on this entire journey. Not only was it incredible to just see it in Seattle, but the turnout and atmosphere were amazing. We set a record for attendance at a women’s game on US soil. I am not surprised but it is still a proud moment. Well done, Seattle!

The game on the ice was outstanding. Hilary Knight, who was presented with a golden stick before the game for being the all-time leader in points in IIHF World Championship play, potted two goals for Team USA. We were also treated to goals from Marie-Philip Poulin and Sarah Nurse, both icons for Team Canada. The game featured a bit of the nastiness we expect when these teams play, with plenty of scrums and hits throughout the night. For me, USA-Canada is must watch, so if you have never seen these teams play, give it a try, as you will not be disappointed.

Here are the next two games of the Rivalry Series:

Much like the Canucks game in October, this has all the makings of a trap game. It’s the classic scenario where you beat the teams that are good and lay a stinker of a game to a team you should beat. Seattle probably should not sleep on San Jose right now, as the Sharks have won three out of their last five games with victories against Minnesota, Vegas, and Dallas, all solid teams.

James Reimer – Reimer had 43 saves in defeat against the Rangers on Saturday… after allowing six goals on sixteen shots against the Red Wings on Thursday. Which Reimer will show up on Wednesday?

Timo Meier – After a cold start, the Swiss winger led the Sharks in goals scored last season. He is fun to watch with a little bit of a snarl to his game.

The Kraken will look to redeem themselves from their worst game of the season in the home opener when Vegas spanked Seattle 5-2 at CPA on Oct. 15. In all honesty, it was not even as close as the 5-2 score felt. At the time, we were unsure how good the Golden Knights would be this year after missing the playoffs last year. There were a lot of questions about their health, and goaltending seemed a bit uncertain. Since then, they have proven to be one of the better teams in the league and are tops in the Pacific Division. I am nervous but excited for this game. It is a benchmark game to see just how good the Kraken are.

Jack Eichel – Have you heard about this guy? Apparently, he is good at hockey. In all seriousness, Eichel seems to be back at a 100 percent and the fully operational superstar that we expect him to be.

Shea Theodore – The former Seattle Thunderbird is logging the second most minutes on the team and leads Vegas defensemen with three goals on the season.

Another redemption opportunity. The Kraken were the better team when they played in Anaheim to kick off the season but squandered the win away in the third, only to capture one point in the overtime loss. It stung back then, and the team will look to leave no doubt when they take the ice for the Sunday matinee.

Trevor Zegras – He is one of the flashiest players in the NHL, and although I hope he does not score on Sunday, I cannot ignore how much fun he is to watch.

Austin Strand – The undrafted defenseman was part of that Seattle Thunderbird championship team in 2017. He has only played a handful of games in the NHL over the last three seasons, but a rash of injuries on the Ducks blue line has given him a handful of games so far. TBD if he will still be in the lineup next Sunday, but if he does play, it will be fun to see him square off against the Kraken.

I know faceoffs do not mean what they used to, but you still want to win them more often than you lose them. Early season it seemed like the faceoff circle was a challenge, and I have seen the team actively working on faceoffs in practice so I looked at the data…..

As always, please feel free to share any feedback. I have received a lot of positive feedback on this Monday column but continue to strive to make it better.