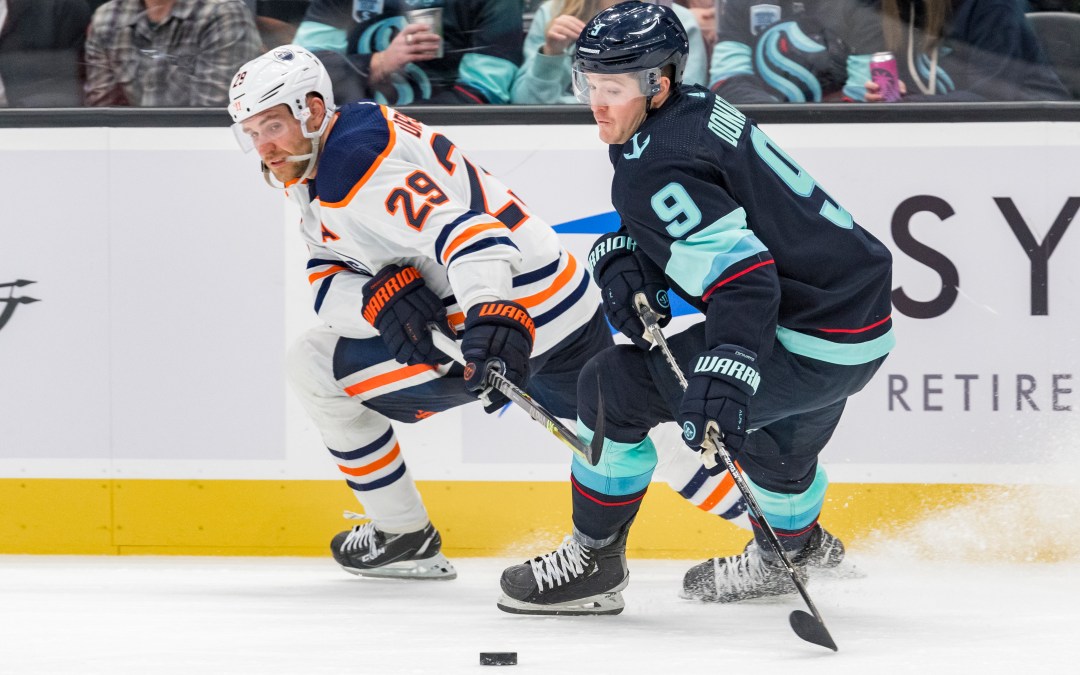 We’ve seen this movie before. After a long win streak gets snapped for an NHL team, it is very typical for that club to lose at least a couple games soon after the streak ends. The challenge is keeping the dip that inevitably comes to nothing more than a game or two. Well, the Kraken were handed their second loss in a row Tuesday in a 5-2 defeat to the Edmonton Oilers.

The players sounded disappointed in themselves for not executing better Tuesday, but fatigue has to be setting in to some degree. While the Kraken have racked up 16 points this month despite a miserable schedule, the amount of travel and games they’ve played in a short time does take its toll. The players refuse to make excuses, though.

“I said this last game, there’s no excuse for being tired right now,” Vince Dunn said. “We’ve got to find a way to win games. We’re just halfway through the season, so if we’re tired now, then we’re definitely in a lot of trouble. But I don’t think that’s it. I think it’s our execution right now. It needs to be better.”

Here are our Three Takeaways from a 5-2 Kraken loss to the Oilers.

Seattle was rolling for the first 10 minutes of the game Tuesday. The Kraken jumped out to a 1-0 lead and looked to have their legs in the early going, despite being on the second of back to backs and playing their eighth road game in 15 days.

But the momentum was halted when Morgan Geekie took an undisciplined penalty in the neutral zone.

By the seven-minute mark of the game, Edmonton had already been called for two penalties. When that happens, you know the officials are looking for an opportunity to even things up, and Geekie gave them the chance to do so.

Coming through the neutral zone, Geekie took an innocuous bump from Evan Bouchard. Rather than skating away, Geekie gave Bouchard a two-handed slash that landed him in the box.

It’s not the first time this season Hakstol has pointed to a penalty as a turning point in a game. He also called out Carson Soucy twice earlier in the season, once after the Kraken lost in overtime to Winnipeg on Nov. 13, and another time after Seattle lost to Calgary on Dec. 28.

Though it was one of those “just not Seattle’s night” type of games, there were some fleeting moments in which the Kraken seemed to be giving themselves a chance.

They came out very hot in the first period and scored a power-play goal when Daniel Sprong—looking for a high tip from Jordan Eberle—actually banked his shot-pass in off Darnell Nurse. The goal was initially awarded to Eberle but eventually was changed to credit Sprong with his 15th of the season, a new career high.

Then, after giving up the next three goals to Edmonton, Vince Dunn scored what can only be considered a soft goal for Oilers goalie Jack Campbell. But, it was a big goal in the moment and extended Dunn’s point streak to a franchise record eight games.

The momentum boost was short-lived, though. Eeli Tolvanen, who has been red hot since making his Kraken debut on Jan. 1, made a good defensive play to poke the puck off Zach Hyman’s stick. The problem was that the puck came off Tolvanen’s stick with enough pace that it actually snuck by Martin Jones, who clearly wasn’t expecting it to come his way.

The unlucky own goal made it 4-2 and got things rolling in the wrong direction. The worn out Kraken couldn’t put the wheels back on the wagon after that.

Takeaway #3: The schedule has been brutal in January

There are a couple reasons no team had ever swept a road trip of seven or more games before the Kraken did just that in the first two weeks of 2023. First off, winning on the road is hard to do, especially for that many games in a row. You face a hostile crowd in a semi-foreign environment, and your opponent gets the advantage of last line change all game long. Second, teams typically just don’t have road trips that long.

The Kraken had a relatively comfortable schedule in October, November, and December, but they are making up for it on an absolutely brutal stretch of games in January.

After finally returning home for just one midday game against the Lightning on Monday, they had to go right back out on the road to face an Edmonton team that had won its previous three in a row.

The players and the coach won’t admit it, but Seattle looked tired both Monday and Tuesday.

Hakstol also mentioned there were several players “below the bar,” so we wonder if we’ll see John Hayden make his Kraken debut Thursday, as the coach looks for a jolt.

Seattle finally gets to come home for a while now, but things will remain tough for the rest of the week. The streaking New Jersey Devils will be in town looking for their sixth straight win Thursday, and then the defending Stanley Cup champions, the Colorado Avalanche, will visit on Saturday.

Thankfully, a respite is on the way for the group, which desperately needs it. After that Colorado game, the Kraken will play just three games in 16 days.