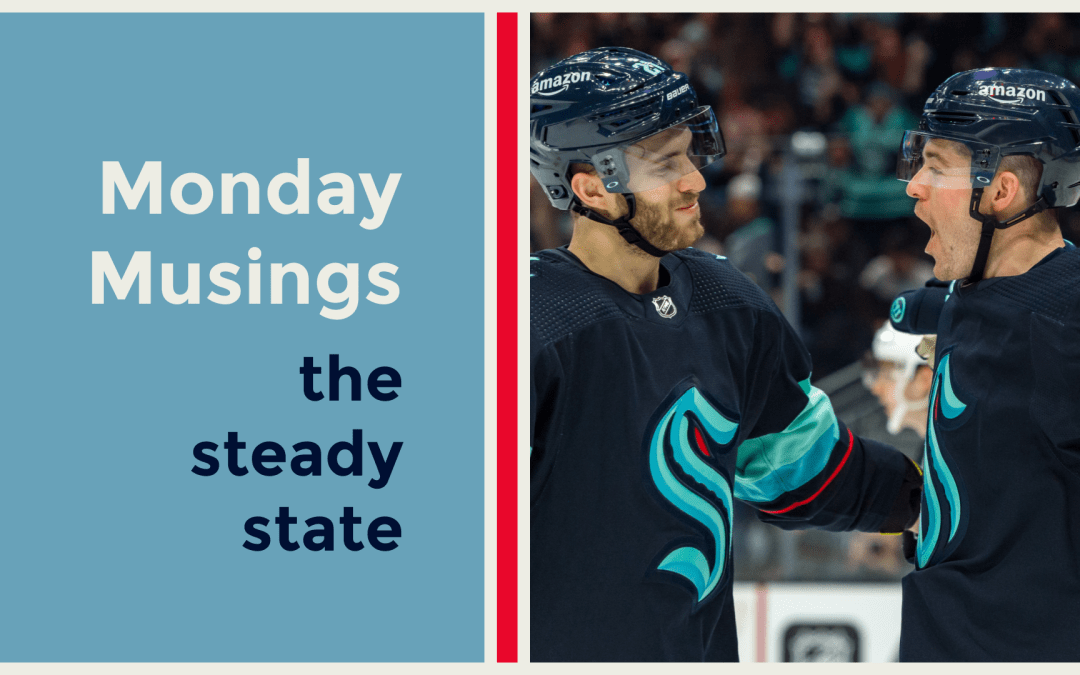 On the surface, a 1-2-1 week does not sound like a great week. The games on Monday and Tuesday of last week felt like an ambush and account for the two losses. On Monday, the Kraken faced the Tampa Bay Lightning at home less than 36 hours after they returned from a two-week seven-game road trip. Right after that game they would immediately jump on a plane for a road game in Edmonton the following day.

It was a tough scenario that ultimately ended with two regulation losses. Both games featured a healthy amount of “compete” from the boys, but they looked tired at times. Coming up with a win or even a point would have been nice, but just chalk it up to a challenging schedule.

Thursday night, the Kraken dominated the New Jersey Devils, but the Devils stuck around and forced overtime with an extra skater on the ice. That just prolonged the inevitable with Andre Burakovsky burying the game winner just 70 seconds into the extra frame. Then Saturday’s game against the Colorado Avalanche was a bit of a slugfest that ended in a 2-1 shootout loss.

The last week of games could have been better, but the Kraken are 7-2-1 over their last 10 and are now sitting, by points percentage, in first place in the Pacific Division.

Unfortunately, we started to see some health issues pop up this week. About halfway through the Edmonton game on Tuesday, Justin Schultz took an innocuous-looking hit halfway through the second period, but he left immediately after and did not return the rest of the game. Schultz has not played in the two games since the Edmonton game. Then, in somewhat of a surprise, Andre Burakovsky was out of the lineup on Saturday night against his former team just two days after scoring the overtime game winner against the Devils.

Schultz and Burakovsky joined Jaden Schwartz who has not played since Jan. 12. All three of those guys have been significant contributors to the Kraken’s success this season and will be critical for the long-term outlook of this team. It should be noted that none of the three have been officially placed on injured reserve so maybe we should not be overly concerned here.

The All-Star break is just three Kraken games away, and with extra recovery days on the horizon, this might be the best time for minor injuries to hit.

Strength in the Pacific?

As well as the Kraken have been playing, it is important to point out that Edmonton and Calgary have also been winning. It is great to celebrate the recent success, but the Kraken cannot lift their foot off the pedal. There are teams doing everything they can to get back in the playoff hunt.

Right now, 95 points is the projected cutoff for making the playoffs. If the Kraken were to play .500 hockey the rest of the season, they would have 95 points exactly.

Kraken themes for the week ahead

There is a series of interesting games coming up this week for the Kraken. On Wednesday, the Vancouver Canucks will visit Seattle to play their first road game under new head coach Rick Tocchet. Tocchet interviewed with the Kraken to be their first coach, so you can imagine he might have some extra motivation that night. The Kraken are 0-5-1 all time against the Canucks, and Vancouver is one of four teams remaining that Seattle has never beaten in its brief franchise history. Those narratives aside, these are two point that the Kraken, at least on paper, should pick up.

The Columbus Blue Jackets visiting Seattle will be an excellent opportunity to pick up some points. The Blue Jackets are dead last in the league with just 30 points in the standings. This will be the last Kraken game before the All-Star break, though, so it feels like a trap.

I expect Burakovsky to be back in the lineup soon but am less optimistic about Schultz and Schwartz. Burakovsky warmed up against Colorado before being scratched, so that would indicate his injury isn’t too severe. Although the team has not released any details on Schultz and Schwartz, they have each missed multiple games. Even if they could play, resting Schultz and Schwartz this week before the All-Star break might be the best play here.

Ryan Donato (SEA) – The injury to Schwartz has allowed Donato to play further up the lineup and he is seizing it. He has three goals in the last two games and is currently on pace for 21 goals on the season.

Clayton Keller (ARI) – There have not been a lot of bright spots for the Coyotes this season, but Keller is one of them. He scored a hat trick against the Golden Knights on Sunday in a 4-1 win. Thanks Clayton.

Vitek Vanecek (NJD) – The “former” Kraken netminder had two wins in two starts and posted a .931 save percentage in those two games last week for the New Jersey Devils. If you do not know the story about Vitek, he was drafted by Seattle in the NHL Expansion Draft, but when the Kraken signed Grubauer in free agency a week later, Vanecek became expendable. The Kraken traded him back to the Capitals for a second-round draft pick.

What should be obvious by now, the Seattle Kraken are the second-most-improved team in the league.

Thanks again for all your engagement and questions on these posts. If you have anything you want me to look into, feel free to leave your suggestions in the comments.