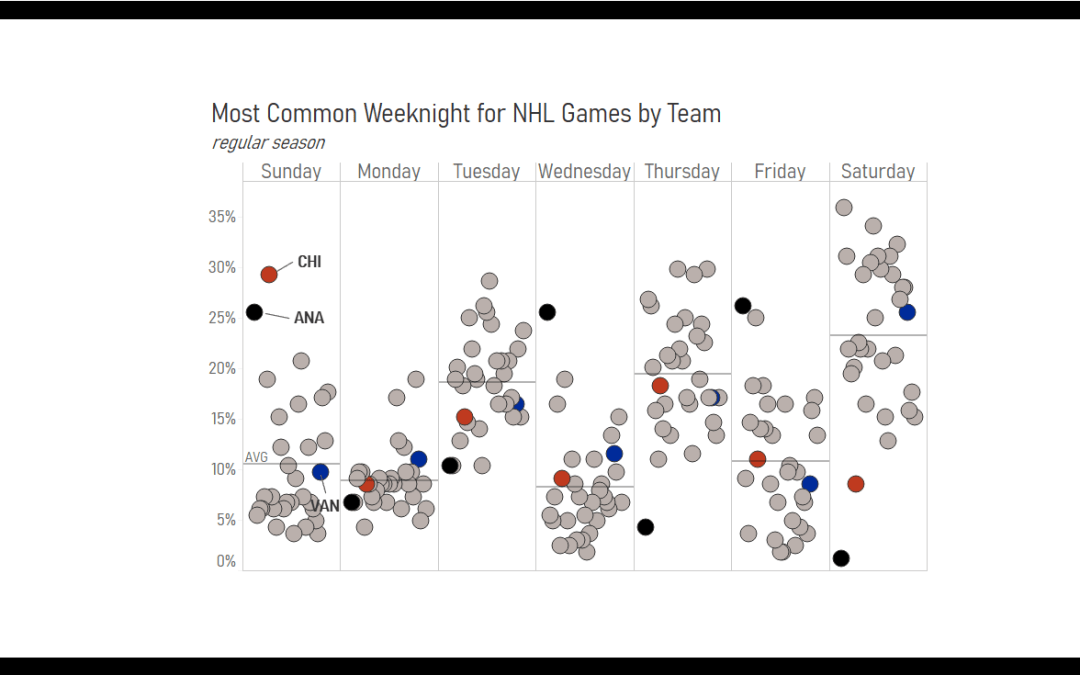 We are still six months away from the Seattle Kraken’s inaugural season, but that time is going to fly by. Those of you who are lucky enough to have season tickets will soon need to start planning your calendars for the 2021-22 NHL season.

To help you plan, I look how a typical NHL schedule would shake out for the Seattle Kraken.

Let us start off with some basic information about a traditional (non-COVID impacted) NHL schedule. A typical schedule will have six preseason and 82 regular-season games that are split evenly with home and away games. The preseason starts in mid-September, regular season kicks off about a week into October, and the regular season ends in the second week of April. That gives us a typical home schedule of three preseason games and 41 regular-season games that runs from mid-September to early April.

If you spread the schedule out by month, NHL teams have about 6 home games a month. Here is a look at that seasonality.

As we slowly return to normal, you are likely to start re-committing to beer league hockey, book club, date nights, pick-up hockey, trivia night, hockey tournaments, etc. You might want to avoid conflicts in your schedule by looking at the most common NHL nights of the week.

You might want to avoid scheduling activities on Tuesdays, Thursdays, and Saturdays.

This data is based on the NHL schedules over the last four fully completed seasons (2015-16 through 2018-19). This does not mean it will stay consistent over the next season. There are few things that could factor into the schedule format next year.

ESPN might have plans that could alter the schedule a bit. The ESPN deal has 25 regular-season games on the ESPN TV network (75 on ESPN+). All you mathematicians out there probably estimated that 25 games work out to be about one game a week. It is a best practice to establish a cadence for the games so people do not have to check their local listings every week to determine when hockey will be on ESPN. An example of this is how NBCSN branded Wednesday night as “Rivalry Night” on their network to create some buzz and awareness about their NHL nationally televised games. This has an interesting impact on the rest of the schedule where the league tries to clear out certain days to turn the focus onto the nationally televised game.

The league has made it perfectly clear that they will be returning to our normally scheduled divisions once we get through this 2020-21 temporary alignment. One thing that may stick around is the two-game series scenario. For those unfamiliar with this 2020-21 phenomenon, the NHL strategically scheduled several teams with back-to-back games in the same city to limit travel and potential COVID-19 exposure. Based on some reports, this back-to-back scenario might have some legs for sticking around and could impact the distribution of games in a week. For example, instead of a Thursday in one city, and Saturday in another, teams might play Thursday and Friday in the same city.

I hope this gives you some insight into a typical NHL schedule and what we might expect for the 2021-22 season. There has been no announcement on when that 2021-22 NHL schedule will be released, but we at SOH anticipate its release sometime in August.