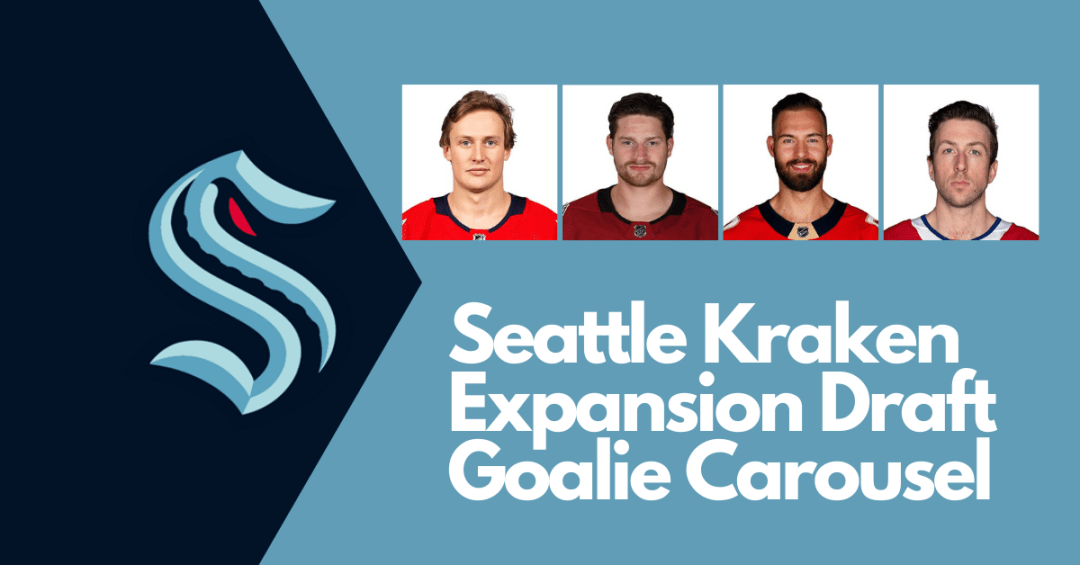 What the people need and what they want are two very different things. At Sound Of Hockey, we typically focus on producing the content that we believe hockey fans in the Pacific Northwest and beyond need in preparation for the inaugural Seattle Kraken season. But sometimes, we have to give the people the content they want, and we have learned that more often than not, what they want is goalie content. Three months have passed since our last twirl on the Seattle Kraken Expansion Draft goalie carousel, and a lot has changed in that time. Let’s take another spin, shall we?

Still riding after all this time

This is actually our third ride on the Seattle Kraken goalie carousel, with the first dating all the way back to our NHLtoSeattle days. A few backstops have been on our radar since that first post in June, 2020, and it’s time we check in on those individuals to make sure they are still upright on their respective mechanical horses and are not in need of any motion sickness remedies or bags.

When Braden Holtby was with the Capitals, Seattle fans clamored for him to be the first Kraken netminder. That tune has changed a bit now that he is with the Canucks. Now, the question is no longer if he will be made available in the Expansion Draft—he certainly will—but if Seattle would want him anymore.

Vancouver stinks, but Holtby has done little to help right the ship. Instead, he has gone 4-6-2 in the backseat behind Thatcher Demko and has posted a dreadful 3.57 goals against average and .894 save percentage. His contract is also structured to make his selection by Seattle less palatable, so we think it is now unlikely that Holtby will be moving his tortoises to the Emerald City prior to next season.

While Holtby is lying on the floor of this merry-go-round, being dragged by the stirrup of the oscillating horse from which he fell long ago, Adin Hill is still riding upright and proud in the saddle of his noble steed.

In fact, we at Sound Of Hockey believe Hill’s position as a future Kraken netminder has been solidified over the past few months, with Arizona’s protection list now clearer. Frankly, there won’t be much to choose from for the Kraken at either forward or defense, so they might as well take a look at the Coyotes’ goal crease.

Hill has once again been thrust into NHL action with both Antti Raanta and Darcy Kuemper somehow simultaneously injured for the umpteenth time. Hill, 24, has performed admirably behind a mediocre team, going 4-3-1 with a 2.44 GAA and .920 save percentage. He also just notched a shutout against San Jose and recently defeated a Colorado team that was absolutely rolling. He won’t necessarily be the bona fide starter for Seattle, but Hill makes a lot of sense in a tandem or even as a third option.

Settled in on the merry-go-round

There were a few other netminders that became Seattle Kraken goalie candidates on our second twirl back in December.

Jordan Binnington signed a long-term deal with St. Louis, so he has calmly and respectfully exited after just one revolution.

Anton Khudobin is still on the ride, but he’s making a bit of a ruckus, and the ride operators are considering asking him to depart in the near future. After carrying the Stars in stunning fashion all the way to the Stanley Cup Final last season, Khudobin has fallen back down to Earth with a thud.

He’s had every opportunity to secure his spot as Seattle’s first goalie, but Khudobin has struggled to the point that Jake Oettinger has nabbed the lion’s share of starts lately for Dallas. Oettinger, 22, is exempt from the Expansion Draft, while still-injured Ben Bishop is expected to return this season and has a no-movement clause. So, it will still be Khudobin that gets exposed, but like Holtby, we’re questioning if any interest remains from Seattle.

Talbot has been a huge bright spot for Minnesota this season and is probably the second-biggest reason behind Kirill Kaprizov that the Wild are solidly in a playoff position. We still have him tabbed as the netminder to get exposed there, however, as Kaapo Kahkonen has also been excellent, and at just 24 years old, we expect the younger netminder to get protected. Still, Minnesota has a big protection issue with its skaters, so a forward or defenseman remains the more likely selection for Seattle.

Allen, meanwhile, hasn’t played quite as large of a role for Montreal, but he has solidified himself as an obvious option for the Kraken to consider. The former St. Louis Blue is 4-3-4 with a 2.34 GAA and .920 save percentage playing behind Carey Price. Allen has all the talent in the world, but his streakiness requires him to be part of a platoon to be successful.

Of course, it wouldn’t be a carousel if there weren’t newcomers with every turn.

One such newcomer is Dan Vladar, who has gotten a couple chances in Boston this season and has not disappointed, allowing just three total goals and winning both contests. He’s had good AHL numbers over the past few years as well, so one could make a case for taking Vladar as a pick for the future, especially if the Kraken can snag him in a side deal. The Bruins also have Jeremy Swayman in their system, so perhaps they will view Vladar as expendable.

The rub with Vladar, though, is that both Tuukka Rask and Jaroslav Halak are on expiring deals. In theory, the Bruins could wait to re-sign those guys, protect Vladar from the Expansion Draft, and then get their veteran goalies back in the fold, assuming there’s still mutual interest. So there’s a chance Vladar is not available to the Kraken in the end.

Moving down the coast a bit, Vitek Vanecek was not on our radar entering this season for Washington. With Holtby moved onto smaller and poorer (is that the opposite of bigger and better?) things in Vancouver, it was expected that Ilya Samsonov would seize the Capitals net, with Henrik Lundqvist affording him the occasional break. Instead, Lundqvist had offseason heart surgery, and Vanecek emerged as the number one netminder. Samsonov is still getting a good share of the starts, though, and both are playing relatively well behind an excellent team. Both require protection so whichever of Vanecek or Samsonov is left exposed will be a good pick for the Kraken.

Even farther down the coast, Chris Driedger has also emerged as an unexpected breakout star for the Florida Panthers. He’s been good enough to take 15 of 35 starts from Sergei Bobrovsky, who is on a $70 million contract. Driedger tops our wish list, but the problem is that he will be an unrestricted free agent after this season. To get Dreidger, the Kraken will have to get him to agree to terms on a contract during the team’s 48-hour exclusive negotiating window, then select him in the Expansion Draft. With the allure of the open market, Driedger spinning off the carousel and into the Climate Pledge Arena goal crease feels like a longshot.

Finally, folks in the Seattle area got pumped about Joey Daccord when he won his first NHL game for the Ottawa Senators and gave a really great post-game interview. The former Arizona State Sun Devil has a 1-3-1 record with a 3.27 GAA and .897 save percentage. He only has one season of AHL hockey under his belt with decent (but not exceptional) statistics. Daccord also injured his leg a couple weeks ago, and there is a chance he misses the remainder of the season, so we do not expect to see him land in Seattle.