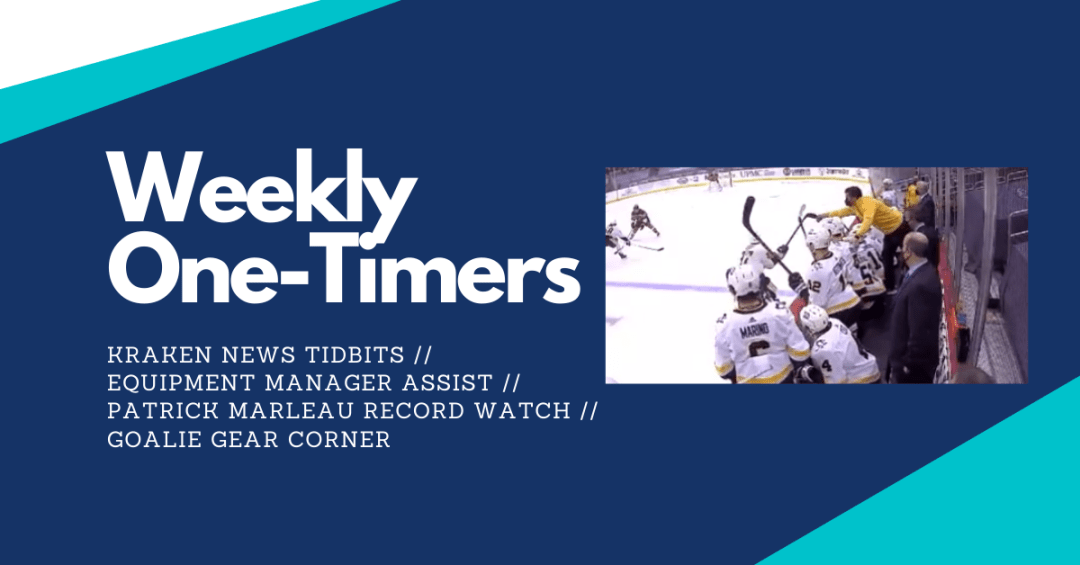 The sun is out and the birds are chirping in the Emerald City. More than 50% of King County residents have received their first vaccine dose, and Seattle Kraken general manager Ron Francis talked to the media this week. In more ways than one, hope springs eternal. With each blooming flower, each passing day, and each little tidbit of Seattle Kraken news, we inch closer to the Expansion Draft and the arrival of the NHL’s 32nd franchise, a moment that will live on for all eternity in the hearts and souls of Seattle hockey fans.

If you’re wondering what is wrong with me, well, I’m just in a good mood. It’s nice as f*** out. Let’s get this Weekly One-Timer thing over with so I can go outside and promptly remove my shirt.

It has been a slightly more eventful week than most for the Kraken.

As I mentioned while I was waxing poetic, Ron Francis was made available to the media on Tuesday, and Sound Of Hockey partook. Check out our recap of the availability here or watch the full presser below.

On Wednesday, the team announced the hiring of four new leaders for its youth hockey and figure skating programs, which will be housed at the new Kraken Training Center. Martin Hlinka will serve as youth hockey director, while David Kyu-Ho Min and Katelyn Parker were hired as player development coaches. Chad Goodwin will be the figure skating director. Read all about the new hires here.

That same day, the team tweeted out the below photos, showing not only the concrete being poured for the ice sheets at the new three-sheet practice facility, but also the wall painted beautifully in the Kraken color scheme.

Have you ever seen such a beautiful wall inside a local hockey arena? No, you have not.

Finally, the High Tide Waitlist went live this week. The annual $250 membership guarantees the opportunity to purchase four single-game tickets and comes with some special access, contests, and content. There are 10,000 total spots on the waitlist. See the details of the program here.

We at SOH hold no opinions about the High Tide Waitlist, but would love to get your thoughts on it in the comment section.

Jack Eichel suffered a neck injury on March 7 in a game against the Islanders. On March 29, Buffalo’s interim coach, Don Granato, told media he didn’t think the injury would be season-ending. Granato was apparently wrong on this topic, as Eichel has officially been ruled out for the remainder with a herniated disk.

And so, it is confirmed that playing for the Sabres really is a pain in the neck.

Also on the injury front this week, the Dallas Stars announced that neither Ben Bishop nor Alex Radulov will return this season. Bishop has not played since March 2020 due to a knee injury. He was expected to return at some point, but the Stars have now decided against pushing their starting netminder back into action. Radulov needs surgery on a core muscle.

It has been a difficult season in Dallas, where the runners-up from last year remain five points outside of the playoff picture.

Making a trade prior to Monday’s NHL Trade Deadline was apparently not the only way for the Tampa Bay Lightning to swap out players.

The Bolts have been on the brink of exceeding the salary cap all season. The only reason they were able to remain compliant is that Nikita Kucherov was placed on long-term injured reserve at the beginning of the campaign, removing his $9.5 million cap hit.

Now, Steven Stamkos, who has scored at close to a point-per-game clip this season, has been placed on LTIR with a lower body injury retroactive to April 9. That means the earliest he can return is May 3. Stamkos carries a $8.5 million cap hit.

But wait! There’s a twist! Who could have guessed this? Kucherov now appears ready to return! What a fascinating coincidence!

The Canucks have been dealing with a very serious Covid outbreak for the last couple of weeks that has resulted in as many as 25 players and staff being placed on the NHL’s Covid protocol list.

The team hasn’t played since March 24, but the league had planned to have the team return to action this week. Vancouver forward J.T. Miller spoke up, however, calling it “dangerous to a lot of players” to rush the team back.

The NHL responded by postponing Friday’s game between the Canucks and the Oilers and totally revamping the team’s schedule for the remainder of the season. The Canucks will now play until May 19 and will have 19 games in 32 days.

The CHL has officially canceled the Memorial Cup for the second consecutive season due to Covid concerns. The cancellation of the championship tournament does not come as much of a surprise. The QMJHL has had several starts and stops with teams playing varying numbers of games, the WHL is playing just 24 games with no playoffs to name a winner, and the OHL has not played at all. So determining which teams should participate, plus quarantine requirements and border closures, would have made safely pulling this off nearly impossible.

Former Seattle Thunderbird Patrick Marleau, 41, is expected to tie Gordie Howe’s career games played record on Saturday and break the record on Monday. When his Sharks take on the Wild on Saturday, it will be career game number 1,767 for Marleau, a number set by Mr. Hockey that many thought would be untouchable. What’s most impressive about Howe’s mark is that it doesn’t include the 467 games he played in the WHA from 1973 to 1979. He also returned to the NHL as a Hartford Whaler at age 52 and appeared in 80 games (those games are included in his NHL record). Still, what Marleau is about to do is truly an incredible feat.

Team USA’s roster for the Men’s Under-18 World Championship was announced this week. Everett Silvertips netminder Braden Holt made the team. The tournament will be played April 26-May 6 in Texas and is the last chance for the world’s top prospects to showcase themselves on a big stage before this summer’s NHL Entry Draft.

FYI, the Jack Hughes listed is a different Jack Hughes than the one that plays on the New Jersey Devils, which is confusing.

One of the more fun plays in hockey is when an equipment manager gets an unofficial assist. Sidney Crosby gave his stick to a defenseman who had been rendered stickless in Pittsburgh’s zone on Thursday. With the play going the other way, Sid flew by the bench and grabbed a new stick from Penguins equipment manager Jon Taglianetti. He then raced into Philadelphia’s zone and immediately knocked home a rebound.

I’ve never been a huge fan of masks that feature nothing more than a team’s logo. Mikko Koskinen rolled out his new Oilers mask this week, which does just that. I do like the color scheme and matte finish, but it’s just a bit impersonal for my taste.

I might have just put my foot in my mouth a bit, because Blasty the Horse—featured prominently on Louie Domingue’s new mask—somehow gets a pass from me, even though Blasty is technically just the logo for Calgary’s third jerseys.

But Blasty hits different. Blasty has personality. Blasty is blowing fire out of his nostrils for some reason and should probably be taken to a veterinarian to get that checked out.

The cold-activated color-changing paint is so unnecessary and yet so necessary at the same time.

Now this right here is a setup.

Logan Thompson of the AHL’s Henderson Silver Knights means serious business with his all-silver getup. I’m trying to figure out exactly why I like this look so much, and I think it’s the gold lettering that does it for me. The pads are somehow both flashy and subtle simultaneously.

Still, I can’t help wondering, Who wore it better?