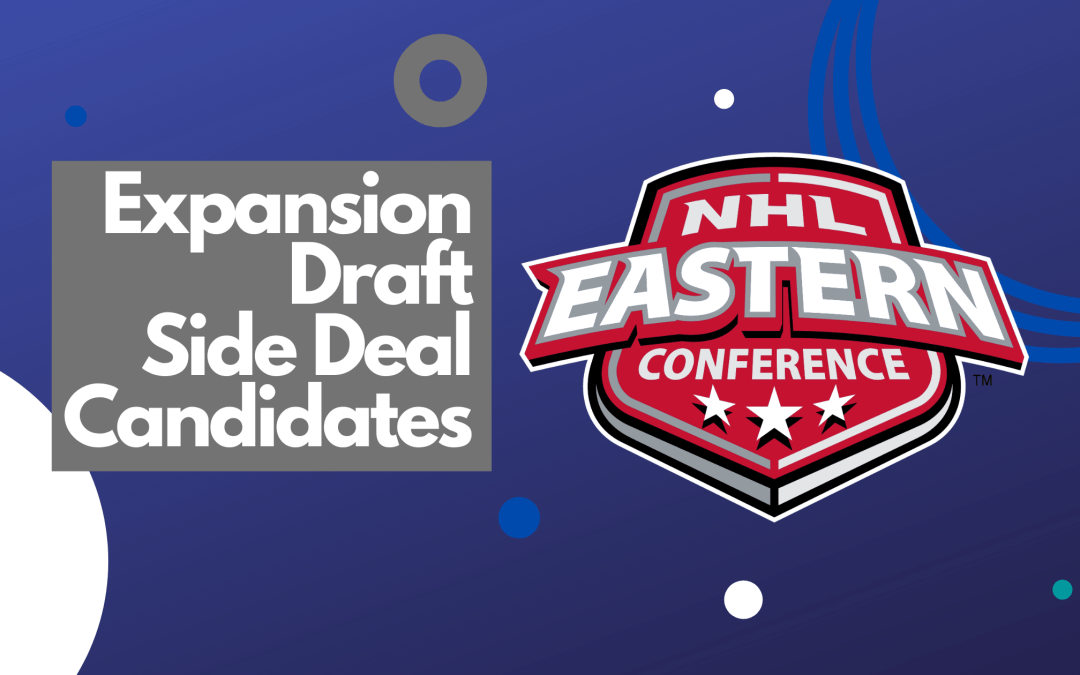 During the 2017 NHL Expansion Draft, Vegas made 10 side deals that netted the Golden Knights an additional six players, 10 Entry Draft picks, and signing rights to one player. Such Expansion Draft side deals will be an important element of the upcoming Seattle Expansion Draft. We went ahead and tiered all 30 NHL Teams that are participating in the 2021 Expansion Draft into four buckets based on the likelihood of the team making a side deal.

We’re starting in the Eastern Conference.

Major factors in determining if a side deal can happen

Tampa Bay Lightning – Heading into this season, Tampa Bay was already doing some salary cap gymnastics to be compliant before the season opener. Nikita Kucherov had surgery that landed him on the long-term injured reserve list (LTIR). This enabled the Lightning to move his $9,500,000 salary cap off the books to keep the team in compliance. Kucherov is expected to be healthy next season and the Lightning will need to move money off the payroll to be compliant for the 2021-22 season.

Boston Bruins – How the Bruins approach the Expansion Draft is anyone’s guess. They have several young players in Trent Frederic, Jakub Zboril, and Jeremy Lauzon. Plus, they have some vets that are making a strong case to be protected in Nick Ritchie and Craig Smith. Three of those five players could be exposed and could create an opportunity for a side deal to protect them.

Buffalo Sabres – Buffalo will want to offload the bad Jeff Skinner contract, but with six seasons remaining on Skinner’s contract, I do not think the Sabres could offer enough to Seattle for them to take it on. However, with only two years remaining on Kyle Okposo’s contract, the Sabres might want to offer some incentives to the Kraken that will create more cap space in Buffalo.

Carolina Hurricanes – Two months ago the Hurricanes looked like a prime candidate for a side deal, but it now appears Dougie Hamilton will not be signing an extension with the Canes. This will allow them to protect Jake Bean. The Canes also sent Haydn Fleury to the Ducks at the trade deadline, so the Expansion Draft options suddenly do not look nearly as appetizing. It is possible that the Canes offer up a draft pick to Seattle if the Kraken do not select Morgan Geekie in the Expansion Draft.

Florida Panthers – At the beginning of the season the Florida Panthers looked like one of the teams with not much to offer the Kraken in the Expansion Draft. Several players are having career years, though, and have made the protected list a bit trickier for Florida. The Panthers further complicated matters for themselves by acquiring Sam Bennett at the trade deadline, and the list of candidates for protection at forward is now a bit crowded. They might want to encourage Seattle to take on a big contract like Patric Hornqvist at $5 million a year by offering up a draft pick to influence the decision.

New York Islanders – As we see it, the Islanders will expose Josh Bailey or Kieffer Bellows in the forward category and either Nick Leddy or Scott Mayfield on defense. General manager Lou Lamoriello might consider offering up a sweetener to influence the Kraken’s decision here if there is a player he prioritizes over another.

Philadelphia Flyers – Signing Scott Laughton to a contract extension last month really threw a wrench into forecasting the exposure list for the Flyers. They will need to expose three of the following forwards: Jakub Voracek, Nolan Patrick, Nicolas Aube-Kubel, and James van Riemsdyk. The Flyers might want Seattle to take on some salary cap and offer up some incentive for Seattle selecting Voracek or van Riemsdyk, both of whom have salary cap hits over $7 million per year compared to Patrick and Aube-Kubel’s cap hits of ~$1 million per year.

Montreal Canadiens – The Canadiens approach to the Expansion Draft hinges on their desire and ability to sign any of their big three pending UFAs: Joel Armia, Phillip Danault, and Tomas Tatar. Signing two of the three would create an exposure issue for Montreal. It might also be possible for the Canadiens to offer up some draft picks to the Kraken for them not to select platooning goalie Jake Allen who has played roughly half of Montreal’s games this season. It seems like a long shot for any of these scenarios to play out.

New Jersey Devils – The Devils continue to rebuild and do not seem like a team that needs to shed any salary. PK Subban’s contract is high at $9 million a year, but he has had a bounce-back season. And with only one year remaining, there is no sense of urgency to get Subban off the books.

New York Rangers – Colin Blackwell might be having an impressive season, but if he is exposed, we do not anticipate the Rangers offering up anything extra to protect him.

Ottawa Senators – The Senators are positioned very well to not lose much in the Expansion Draft and are unlikely candidates for a side deal.

Pittsburgh Penguins – There are a couple players of note that could be exposed in the Expansion Draft, but Pittsburgh is unlikely to part with draft picks primarily because they don’t have many left in the next two years.

Toronto Maple Leafs – The Leafs situation is a bit complicated. They need theoretical space for re-signing Zach Hyman and/or signing a UFA starting goalie not named Frederik Andersen. If they want to sign Hyman and a higher-caliber goalie, then they are going to need to move money off their payroll to create cap space. My feeling is that Hyman will not be re-signed and therefore no side deal with Seattle will really be needed.

Washington Capitals  – The only way the Caps make a side deal is if they want to create some cap space, and we just do not see any obvious bad contracts on the Capitals roster to move.

Close to zero chance of a side deal

Columbus Blue Jackets – The Blue Jackets do not have much to offer Seattle in the Expansion Draft and their salary cap position seems fine.

Detroit Red Wings – The Wings are another team with very little to offer to the Kraken and do not need to worry about the salary cap anytime soon.

Tomorrow I will run through the Western Conference teams of possible Expansion Draft side deal candidates.