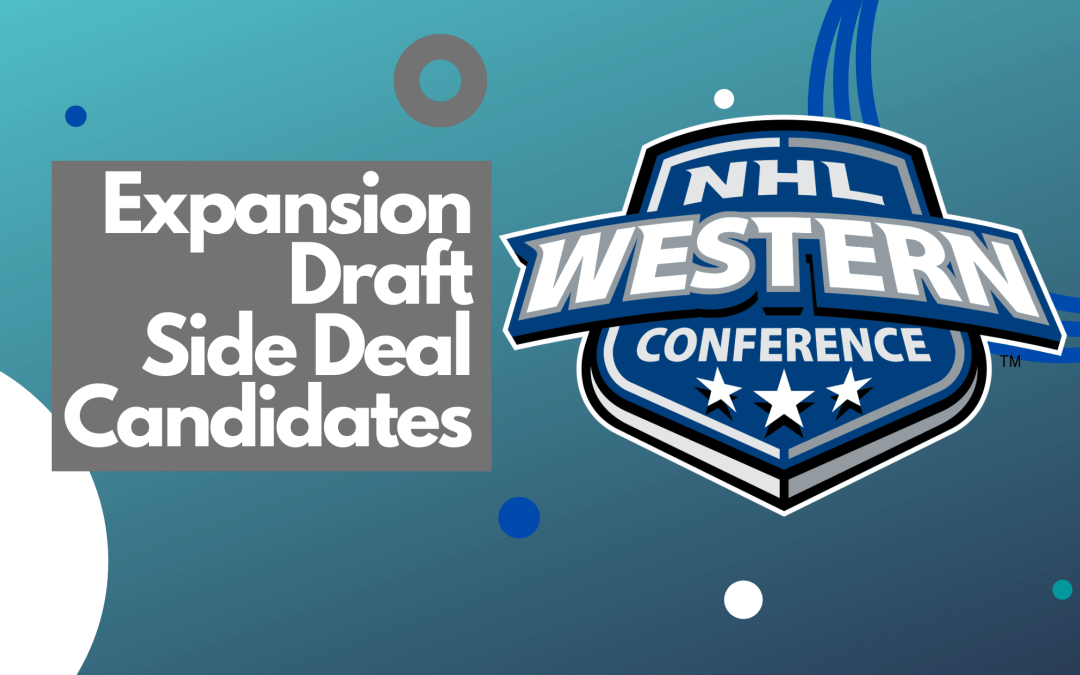 Yesterday we tiered all the teams in the NHL Eastern Conference by the likelihood of a side deal in the NHL Expansion Draft coming in July. If you have not read yesterday’s piece, now would be an excellent time to do so. Today, we will be breaking down all the Western Conference teams.

Colorado Avalanche – The Avs are stacked on the blueline with Cale Makar, Devon Toews, and Sam Girard. The problem is fellow defenseman Erik Johnson has a no-movement clause and must be protected per Expansion Draft rules. Johnson could waive his NMC for the Expansion Draft, but players waiving such clauses in the 2017 NHL Expansion Draft was very rare. Assuming Johnson does not waive his NMC, expect general manager Joe Sakic to swing a side deal to avoid losing Toews.

Nashville Predators – The Predators should be desperate to get either Matt Duchene or Ryan Johansen’s contract off their books. Both carry an $8 million salary cap hit with five and four years remaining respectively. We anticipate both will be exposed, but there is no guarantee Seattle selects either with its pick from the Predators. General manager David Poile could incentivize the Kraken to select either of them with a prospect or a few draft picks via a side deal.

Anaheim Ducks – Before the trade deadline, Anaheim seemed positioned to lose a quality defenseman in the Expansion Draft. To make the situation worse, the Ducks acquired another young defenseman from Carolina in Haydn Fleury. We could see the Ducks offering up a draft pick to Seattle in order to influence who the Kraken select in the Expansion Draft.

Edmonton Oilers – The Oilers will have some exposure risk in the Expansion Draft. At a bare minimum they will need to expose a key defenseman in either Caleb Jones, William Lagesson, or Oscar Klefbom. Assuming Edmonton goes with the eight total skaters protection format, Lagesson is probably the one exposed. One outstanding item is a potential re-signing of Ryan Nugent-Hopkins. If that happens before the Expansion Draft, you can guarantee the Oilers will protect seven forwards, three defensemen, and one goalie. This will expose one more of the defensemen mentioned before and create a potential side deal scenario.

Minnesota Wild – The Wild have three defensemen with no-move clauses, and Matt Dumba is not one of them. The general feeling is GM Bill Guerin will avoid losing Dumba for nothing in the Expansion Draft and will either trade him before the Expansion Draft, protect four defensemen, or swing a side deal with Seattle. The Wild are well positioned to start competing for a Stanley Cup and probably prefer to keep Dumba as a part of their core. If Dumba is on Minnesota’s roster on July 17, expect a side deal.

Arizona Coyotes – The Coyotes might not have much to offer to Seattle, but they have two goalies worth protecting in Darcy Kuemper and Adin Hill. Kuemper is a high-end netminder when he is healthy, and Hill, who is younger and cheaper, showcased well this year while filling in for the injured Kuemper. The Coyotes might consider a side deal to protect both goalies.

Calgary Flames – The Flames’ willingness to do a side deal with Seattle will come down to how much they want to hold onto either Mark Giordano and/or Oliver Kylington. Kylington went unclaimed on waivers earlier this year. The 37-year-old Giordano is still productive in this league, but if he were to be drafted by the Kraken, his $6.8 million salary could create some space in Calgary to make other tweaks in the roster. We think this makes a side deal less likely, as the Flames may actually be ok to lose Giordano.

Los Angeles Kings – The Kings do have some decisions to make with their sixth and seventh protected forwards. Dustin Brown, Blake Lizotte, Austin Wagner, and Lias Andersson are all candidates for those last two slots of the protected list. If LA wants to protect one more of those, they might offer Seattle a draft pick or a prospect to not select a specific forward.

San Jose Sharks – There has been a lot of talk that San Jose might want to expose Brent Burns in the hopes that the Kraken select him and his $8 million salary cap off their books. Burns is still a strong defenseman in the NHL, and the Kraken may select him with or without an incentive from a side deal.

Close to zero chance of a side deal

Chicago Blackhawks – With the retirement of Andrew Shaw and the move of Brent Seabrook to long-term injured reserve, the Blackhawks moved a lot of salary cap off the books already. They are well positioned to not lose anyone of note in the Expansion Draft, and we would say it is extremely unlikely they are part of a side deal with Seattle.

Dallas Stars – The Stars are in good shape headed into the Expansion Draft with no obviously bad contracts on the books. Thus, they are unlikely side deal partners with Seattle.

St. Louis Blues – The Blues have some decent players that will be exposed, but we do not feel there are any players that warrant swinging a side deal to protect.

Winnipeg Jets – Winnipeg has a few younger defensemen in Sami Niku and Logan Stanley. Neither of them warrants protecting via a side deal.

Did we miss anyone? Are there players or teams that you expect to move via a side deal? Let us know your thoughts in the comments.