A look at whether T.J. Oshie is worth the Seattle Kraken Expansion Draft pick 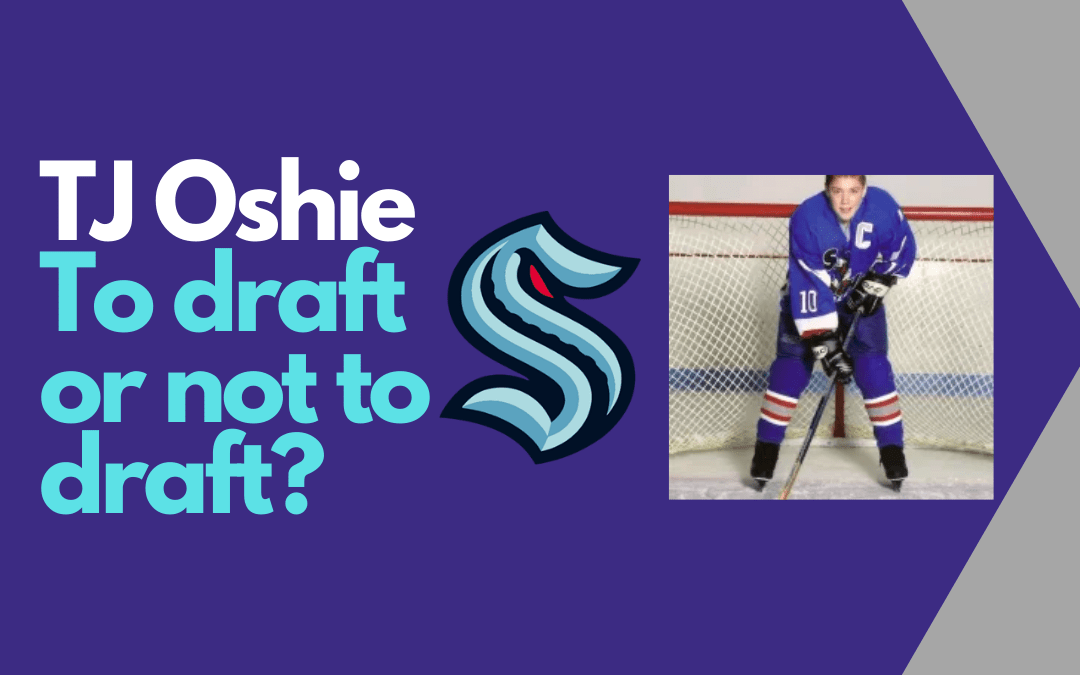 The Seattle Kraken are going to select T.J. Oshie from the Washington Capitals in July’s Expansion Draft. At least that’s what media and message board punditocracy seem to have already determined.

It’s a presumption that makes sense on the surface.

Oshie has been a great NHLer for over 800 games, and his accomplishments are cemented in hockey fans’ memories. He’s an Olympic hero for his shootout antics during the 2014 games, he won a Stanley Cup with the Capitals and drank beer through his shirt. Just this past week he recorded an emotional hat trick, days after his beloved father passed away.

Oh, and he also has a Northwest connection. In case you weren’t aware, Oshie grew up in Snohomish County before moving to Minnesota as a teenager to find more competitive hockey. Of course, if he’s exposed by the Capitals, the Kraken will select him for that local angle, right? Imagine the jersey sales and marketing opportuities.

But should they? What matters more, his local connection or his production on the ice? While Oshie being selected in the Expansion Draft would make for a nice story, the Kraken want to win.

Will selecting Oshie in the Draft help the Kraken market the team?

Oshie returning to his hometown would be a great narrative. The local kid leaves home as a teenager, achieves great success before returning home to lead the new NHL club in its infancy. It’s got a feel-good Disney movie written all over it.

The Kraken really don’t need help marketing the team, though.

They’ve sold out all their season tickets, built a waiting list of 60,000 people, and merchandise has been flying off the shelf – and that’s without jerseys being available.

Further, while the local hockey fans – of which there are plenty – are aware of who Oshie is and where he came from, the casual sports fan may not. If you randomly polled ten local Seattle sports fans, ones who don’t follow hockey but will root for all the hometown teams, how many will know Oshie’s name? Four? Three?

Still, his selection would be a story, one that every local and national hockey writer will write about in the post-draft excitement. The local news will produce features and Oshie will make the rounds on the local sports radio stations – stations that have mostly ignored the NHL to date.

That exposure will capture those six or seven casual sports fans who didn’t previously know him. They will relate to Oshie, connect with him, and it will help cement the Kraken into the local sports scene – plus, he’s already a Seahawks fan.

So, there is a benefit to having a local guy come back, but still, what about the production on the ice? After all, winning is the ultimate marketing tool. Nothing will excite the city better than putting out a competitive product early into the Kraken history.

Is Oshie’s production worthy of an Expansion pick from the Kraken?

Oshie will turn 35 two months into the upcoming season, but his play has not shown any decline at this stage of his career. In 53 games with Washington this season he’s scored 22 goals with 43 points.

Those numbers are on pace with the bulk of his career.

He can still shoot, and this year’s 20.8 percent shooting percentage is the second highest in his career, coming off a 19 percent mark the season prior. Throughout his time in the NHL he’s averaged just over two shots per game and is at that pace this year as well, showing no drop-off.

Oshie has only had one NHL season where his Corsi-For percentage was under 50 – this year he’s at 52 percent – and his expected goal (xG%) percentage this year is also 52, which is an increase from last season. Not only is he still driving possession but he’s creating chances for the Capitals.

Those are all great five-on-five numbers, but the Capitals use Oshie quite a bit on the power play, and that’s where he’s really come through. With Washington this year, he’s scored 13 power-play goals for a total of 17 points with the man advantage.

His salary is high, with four years left of a $5.7 million contract that would have the Kraken on the hook until he’s 39 if they were to select him at the Expansion Draft. That amount may be reasonable now, but will it in four years?

Are there better options from the Capitals?

Oshie won’t be the only attractive player with the Capitals expected to be exposed for selection during the Kraken Expansion Draft.

If they like the local angle, defenseman Brenden Dillon may also be available. He’s younger, cheaper, still productive, and his time as captain of the Seattle Thunderbirds was more recent. It’s not clear if he’s ever drunk beer through a jersey or t-shirt but Dillon would be a solid top-four defenseman for the Kraken.

Seattle could also consider a young goalie from Washington. Vitek Vanecek, 25, burst onto the scene as a rookie this year and is worth a look. He will likely be exposed (we think Ilya Samsonov gets protected, but if it’s the other way around, then Samsonov is also worth considering), and while he does not have a long NHL track record, Vanecek would be a promising young goalie that the Kraken could groom for the future.

In the end, the Kraken do not have to select Oshie. They have options when it comes to the Capitals, but Oshie will certainly be in the mix. While he is aging, he is still producing at a high level and would instantly become a fan favorite for the way he plays the game and carries himself off the ice.

General manager Ron Francis will weigh all the Oshie factors and have to decide if the salary is worth his age. The prospect is enticing and there is a strong chance that Oshie will be in Kraken colors this fall. If that does come to fruition, it will be because he can and will produce on the ice.