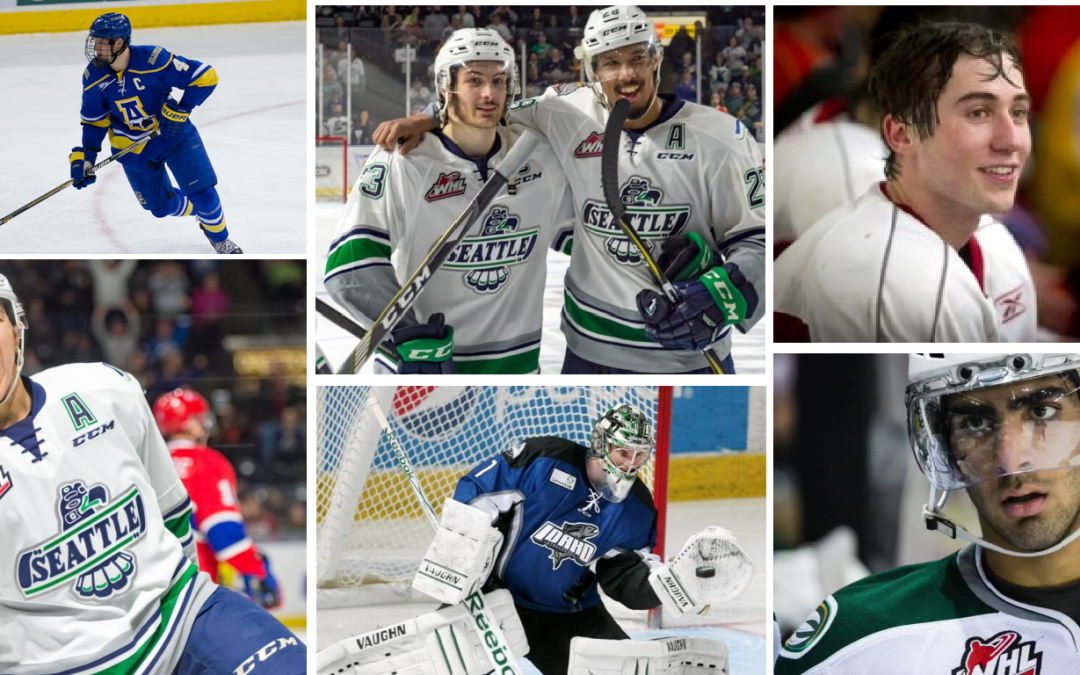 The playoffs kicked off over the weekend, so I threw together my annual Pacific Northwest Stanley Cup Playoff Guide. Each year, I like to run through all the rosters to identify the players and coaches that have ties to the Pacific Northwest. There should be some familiar names here, but there are a few newcomers as well.

Nino Niederreiter played two years with the Portland Winterhawks during the 2009-10 and 2010-11 seasons where he averaged over a point per game. Niederreiter was second on the Hurricanes in goals scored this season.

Morgan Geekie played three full years with the Tri-City Americans. During the 2017-18 WHL playoffs he put up 17 goals over 14 games. Geekie put up nine points for the Hurricanes over 36 games this season, and he is also on the Kraken watchlist as a potential Expansion Draft candidate.

Jake Bean also played for the Tri-City Americans for a half of a season in 2017-18. Bean has started to establish himself in the NHL this year but will most likely be a bubble player for cracking the lineup during the playoffs.

Backup goalie Chris Driedger started his WHL career with the Tri-City Americans in 2010-11 before playing the next three years with the Calgary Hitmen. Driedger has had a breakout NHL season and could be considered as a future goalie for the Seattle Kraken. If Sergei Bobrovsky falters in a game or two, we should expect Driedger to be given a shot.

Radko Gudas played his one and only season in the WHL with the Everett Silvertips during the 2009-10 season. Gudas does not put up a lot of offensive numbers, but he should contribute quite a bit defensively and physically if Florida is able to make a deep run in the playoffs.

Noah Juulsen played four seasons with the Everett Silvertips from 2013-14 to 2016-17. Juulsen only got into four regular season games this season and is not expected to get much playing time during the playoffs.

Tyler Johnson was born and raised in Spokane. He played four years with the Spokane Chiefs and was part of the Memorial Cup-winning team back in 2008. Johnson is a middle-six forward that is known to score some big-time goals in the playoffs.

Let us not forget, friend of the Sound Of Hockey podcast and the assistant equipment manager of the Lightning, Jason Berger. Berger was the head equipment manager for the Seattle Thunderbirds from 2007 to 2011.

Ryan Johansen played two seasons with the Portland Winterhawks during the 2009-10 and 2010-11 seasons. Johansen centers the top line for the Predators and will be needed to perform if they expect to advance past the first round of the playoffs.

Colton Sceviour played two-plus seasons with the Portland Winterhawks from 2005-06 to 2006-07. He is not a regular in the Penguins starting lineup, but as injuries start to pile up, expect Sceviour to crack the lineup.

Maxime Lagace played 11 games for the Idaho Steelheads of the ECHL in 2015-16. Lagace is the third goalie on the Penguins roster but backed up Tristan Jarry in Game 1 against the Islanders as usual backup goalie, Casey DeSmith, is currently injured.

Brandon Carlo has been a steady blueliner for the Boston Bruins over the last four seasons. He played three seasons for the Tri-City Americans from 2013-14 to 2015-16 and should get plenty of ice time during these playoffs.

Jeremy Swayman was born and raised in Anchorage Alaska and was one of four goalies used by the Bruins this season. He may not start any games, but he backed up Tuukka Rask in Game 1 against the Capitals on Saturday night.

Brenden Dillon played four years with the Seattle Thunderbirds including the last season in KeyArena and the first season at the ShoWare Center in Kent. He was also the captain in his final season with the Thunderbirds in 2010-11. Dillon had a goal in Game 1 against the Bruins.

TJ Oshie is the most local Seattle player in the playoffs this season. Oshie grew up in Mount Vernon, Washington and played for Seattle Junior until he moved away to Warroad, Minnesota for high school and for his hockey development. It’s impossible not to root for Oshie this playoff.

Nic Dowd was born in Huntsville, Alabama, but his hockey journey took him through Wenatchee, Washington. He played for the Wenatchee Wild which was then in the NAHL during the 2008-09 season. Dowd had 71 points over 56 playoff and regular season games with the Wild.

Nic Dowd gets the GWG in OT for the @Capitals! 👏 #StanleyCup pic.twitter.com/2FjLulCi4s

The Game 1 overtime winner had a very Pacific Northwest feel as Dillon blocked a shot in the defensive zone that triggered a rush the other way. Oshie floated a shot from the point where Dowd tipped it past Rask.

By now you probably realize Mathew Barzal played four seasons with the Seattle Thunderbirds from 2013-14 to 2016-17 and was a huge part of the 2017 WHL Championship team. The Islanders do not play the most offensive style, but Barzal is still exciting to watch. He led the team in points this season with 45 over the 55 games he played.

Thomas Hickey also played with the Thunderbirds from 2005-06 to 2008-09. Hickey spent most of the season in the AHL with the Bridgeport Sound Tigers but managed to get into five NHL games in the middle of the season. If the Islanders have some injuries to their blueline, expect Hickey to get the nod.

Braydon Coburn played four seasons with the Portland Winterhawks in the early 2000’s. Like Hickey, he is also a depth defenseman who is expected to be called upon in case of injuries.

Kieffer Bellows played one season with the Portland Winterhawks after spending a year at Boston University. Bellows got into just 14 games with the Islanders this year, so like Hickey and Coburn, he is only expected to get playing time if there are injuries to other forwards.

Jacob MacDonald was born in Portland, Oregon. Prior to this year, the 28-year-old defenseman had only played two games with the Florida Panthers in 2018-19. This year, he played 33 games with the Avs. He might not start the playoffs in the lineup but expect him to get some playing time as the playoffs continue.

Avs head coach, Jared Bednar, played for the Spokane Chiefs for two years from 1991 to 1993. In his only complete season with the Chiefs, he amassed 200 penalty minutes in 62 games played.

Shea Theodore played with the Thunderbirds for four years from 2011-12 to 2014-15. Theodore is emerging as one of the elite defensemen in the league. Last year there was talk about Theodore as a Conn Smyth candidate. If Vegas makes a deep run in the playoffs, expect Theodore to be a big part of it.

Keegan Kolesar was also part of the Seattle Thunderbirds 2016-17 WHL Championship season. Prior to this year, “Keegs” only had one NHL regular-season game. This year he played 44 of the Golden Knights’ 56 regular-season games. Kolesar centered the fourth line in game one.

Dylan Coghlan played four years with the Tri-City Americans from 2014-15 to 2017-18. This undrafted defenseman played in half of the Golden Knights’ regular-season games. He did not start in Game 1, but I anticipate he cracks the lineup if Vegas makes a deep run.

Cody Glass was the first amateur draft pick in Golden Knights history. Glass played four seasons with the Portland Winterhawks from 2015-16 to 2018-19. He played just 27 games this season for Vegas and could crack the lineup in a limited role.

Jared Spurgeon played five seasons with the Spokane Chiefs from 2005-06 to 2009-10. Along with Tyler Johnson, he was part of the Spokane team that won the Memorial Cup in 2008. Spurgeon was named the captain of the Wild over the offseason and logs over 22 minutes per game. He is a pillar of the Minnesota defensive corps and will be relied upon heavily if the Wild are to go on a run.

Defenseman Matt Dumba joined the Portland Winterhawks in 2013-14 for 26 regular-season games and 21 playoff games. He has been an excellent defenseman for the Minnesota Wild, and there is an outside chance he could be exposed in the Expansion Draft.

Colton Parayko played three seasons for the University of Alaska-Fairbanks from 2012-13 to 2014-15. He has been a stable defenseman for the St. Louis Blues and was a big part of their Stanley Cup win in 2019.

Jack Campbell played 27 games for the Idaho Steelheads over two seasons in 2014-15 and 2015-16. Campbell has been carrying the bulk of the goaltending load with Frederik Andersen battling injuries the second half of the season. Freddie is back, but we anticipate the Leafs starting the playoffs with Campbell between the pipes.

Nicolas Petan played four seasons with the Portland Winterhawks from 2011-12 to 2014-15 averaging 1.4 points per game over his WHL career. He only got into seven games for the Leafs this season and will only suit up in the playoffs if there are a few injuries.

Kailer Yamamoto was born in Spokane and played four seasons with the Spokane Chiefs. He was the first-round pick of the Oilers in 2017 and played his first full season in the NHL this season.

Ethan Bear was another big part of the Seattle Thunderbirds WHL championship in 2017 and played for the team for four seasons. Bear’s contributions may have dropped off this year but that can all be forgiven with a big Stanley Cup Playoff performance.

Jujhar Khaira has been a steady winger for the Oilers the last four seasons. He played one full season for the Everett Silvertips where he put up 43 points in 59 games.

Caleb Jones played two seasons with the Portland Winterhawks during the 2015-16 and 2016-17 seasons. Jones is just starting to establish himself in the league. He played roughly two thirds of the Oilers’ games and should be getting on opportunity to contribute in the playoffs.

Oilers Head Coach, Dave Tippett, joined the organization formerly known as ‘NHL Seattle’ in the summer of 2018 to take care of a lot of the hockey operations items and strategy, including locker room designs and AHL affiliate, just to name a few. “Tip” made several public appearances on local TV shows, at WHL Games, and even on the Sound Of Hockey Podcast.

Nate Thompson played for the Seattle Thunderbirds from 2001-02 to 2004-05. Thompson centers the fourth line and is not expected to contribute much on the offensive side of the game. Thompson is a great person and an easy guy to root for in these playoffs.

Carey Price has established himself as one of the best goalies in the NHL over the last 10 years, but before that he played for the Tri-City Americans from 2003-04 to 2006-07. His regular-season numbers may have dropped off this year, but Price is known for saving his best performances for the playoffs.