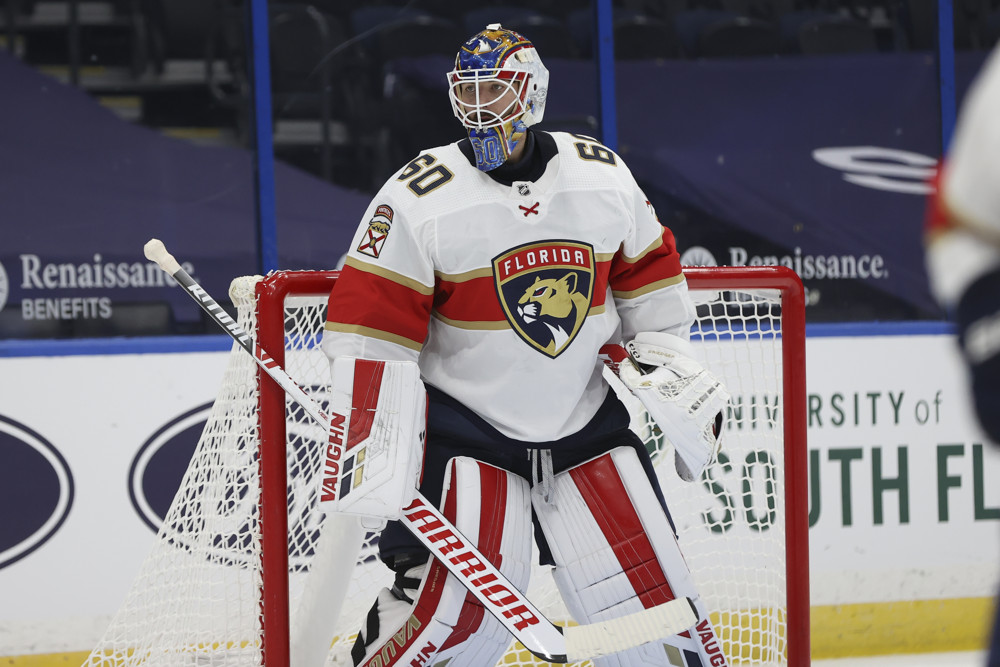 Last week, James Mirtle of The Athletic mentioned that Chris Driedger is a goalie of interest for the Seattle Kraken. Mirtle is hardly the first person to mention Driedger’s name in the same sentence with the Kraken, but he was the first to reference “sources.” Driedger is having a good season as a platooning goalie for the Florida Panthers and will become an unrestricted free agent at the end of the season. This makes him an interesting candidate to be one of the inaugural season goalies for the Kraken.

My concern is Driedger has only seen limited action in the NHL and based on the small sample size, we might not have enough games to assess his long-term capabilities. When I think of older goalies with a small sample size, I immediately think of Scott Darling as a cautionary tale. Darling’s first 20-game season came when he was 26 years old.

Darling had two good seasons in Chicago as a platooning goalie over the 2015-16 and 2016-17 seasons. He then signed a lucrative four-year contract with the Carolina Hurricanes where he struggled mightily and played just 51 games over the next two seasons. His contract was eventually bought out after the second year of the contract. Worth noting, Seattle Kraken general manager Ron Francis was the one who signed Darling, and there’s no question that this deal has lived on in his memory.

For this week’s data dump, I want to look at how Driedger stacks up to comparable goalies that entered the league around the same age as he is now.

A goalie’s lifespan in the NHL is relatively short (that’s a post for another day). As such, coming into the league at 25+ years old is late in a goalie’s career. For the purpose of finding a sample of older goalies that entered the league late, I am going to isolate all netminders who were at least 25 years old at the start of their first season where they played at least 20 NHL games.

There were 33 goalies that fit this profile. Driedger has the highest career save percentage of the group, but that could be a bit misleading considering a lot of these players went on to create larger sample sizes and are either further along in their careers or are already out of the league. Naturally, goalie skill and therefore save percentage declines toward the end of a career.

Now that we have our comp list, let us try to visualize the trends of these goalies’ careers. First, we look at how many goalies would continue playing at least one game in the NHL after their first 20-game season.

Three goalies played 20+ NHL games in their first season and then none the very next season.

To put a finer point on it, let us look at the number of goalies that played at least 10 games in the subsequent seasons of the 33 comparable players.

The drop between year one and two does not seem material, but the drop in year three is significant. Only 36% of the 33 players would play 10 more NHL games just three seasons later. Given this information, any deal you sign with a goalie from this age group should have a limited term of under three years.

We will now add save percentage into the mix to see how well these goalies performed in the games played.

I went ahead and bucketed all 33 players into four categories:

This was completely subjective and was based on how many seasons the goalies played a minimum of 10 games, the number of games they played, and their save percentage.

Here is the count of goalies in each category.

If you strip out the “Too early to tell” group, only five out of the remaining 22 goalies were a success. More succinctly, only 23% of the goalies in this category are determined to be successful.

This analysis still lacks statistical context and goalie scout insights. The broader point is that with only 37 NHL games in his career, Driedger’s long-term success is not a slam dunk for Seattle and the team should proceed with caution, should they draft and sign him to a longer-term deal.

Let me know your thoughts. How would you predict Chris Driedger’s viability on being a No. 1 starter in the league?