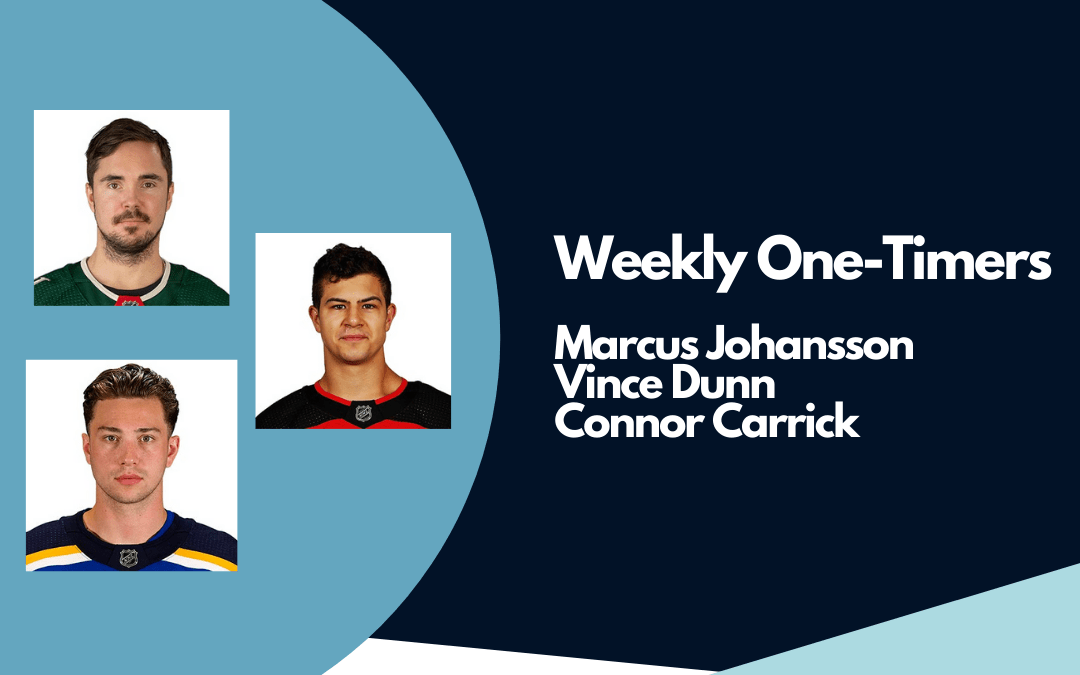 Alright, we will admit, the “Weekly One-Timers” feature on good ole’ soundofhockey.com has turned into more of “Occasional One-Timers” than we planned. But there’s been so much to cover over the past few weeks for the Seattle Kraken, that we’ve rightfully let those items take priority.

The good news for you, though, is that today is one of those “occasions” that we’ve put together One-Timers!

All we ask from you in exchange for these great One-Timers is that you sit back, relax, enjoy, subscribe to our podcast, leave a five-star review on Apple Podcasts, and maybe buy a t-shirt from soundofhockey.com/store. Is that so much to ask?

The Seattle Kraken signed a bunch of players this week

As you may be aware by now, the Kraken made a few big splashes in the unrestricted free agent market last week, signing Jaden Schwartz, Alex Wennberg, and Philipp Grubauer to contracts. They still had a few restricted free agents in need of contracts, though, and made some progress in closing those out this week, while also adding some seasoned help to the roster.

Marcus Johansson has joined the Kraken on a one-year, $1.5 million deal. The 30-year-old veteran is known for his speed and can occasionally chip in offensively, but what makes him valuable is his versatility and ability to play both center and wing. He definitely is more successful on the wing, but can slot into the middle in a pinch.

Johansson is coming off of a middling season with the Minnesota Wild, where he had 14 points, but he missed significant time with a few different injuries. He was acquired by Minnesota prior to last season in a one-for-one trade with Buffalo that sent Eric Staal to the Sabres.

Over the course of his career, Johansson has 135 goals and 243 assists. He definitely adds some veteran depth to the forward corps. He also has lots of playoff experience and has scored some big playoff goals over the years.

The biggest RFA that Seattle was needing to get under contract was Vince Dunn, the 24-year-old defenseman who is expected to play in the top four and potentially quarterback one of the power play units.

Dunn had recently filed for arbitration. That would have guaranteed that some deal got done, but nobody likes being involved in that contentious process if they can avoid it. The team and Dunn did avoid such a hearing by agreeing to a two-year deal at a $4 million cap hit per year. Dunn played four seasons with the St. Louis Blues and won the 2019 Stanley Cup before being selected by Seattle in the Expansion Draft.

This past season, Dunn had 20 points in 43 games and averaged north of 19 minutes per night. He is a young, impact player that will have a huge role with Seattle, so getting him under contract without the long-term agitation caused by arbitration is a big win for all involved. When this two-year contract ends he will again be a restricted free agent, so Seattle will keep his rights.

Former Seattle Thunderbird (and friend of the Sound Of Hockey Pod) Alexander True signed on for one year at a $750,000 cap hit. True, 24, played 19 NHL games for the San Jose Sharks over two seasons and 203 AHL games with the Barracuda over four seasons.

“Alex brings some size and skill to our team at the center position,” said Seattle Kraken general manager Ron Francis via press release. “He’s young and has a successful hockey history in Seattle, scoring some big goals playing in the WHL with the Thunderbirds. We’re looking forward to him continuing that success with our organization.” The Danish center scored the biggest goal in Thunderbirds history to clinch the WHL championship in 2017.

Defenseman Will Borgen, 24, selected in the Expansion Draft from the Buffalo Sabres, signed for two years at a $900K cap hit. He has 14 NHL games under his belt and 140 AHL games. “Will is a responsible, defensive defenseman whose size and physical style of play can add a spark to a lineup,” said Francis. “He’s still young and developing, and we believe in his upside.”

Borgen was a star at St. Cloud State University for three seasons, and before that played for Moorhead High School in northwestern Minnesota. This is notable because Moorhead is known as the Spuds, perhaps the best high school sports team name on the planet.

We knew the RFA deals would eventually get done, but as it did with Johansson, Seattle also surprised a bit by bringing in former New Jersey Devil defenseman Connor Carrick on a one-year $800K contract. Carrick, 27, has a bit more NHL service time than True and Borgen with 241 career games. He split time between New Jersey and Binghamton this past season, with six points at the AHL level and one at the NHL level. Seattle has a deep blue line already, but Carrick adds a bit more NHL experience to the organization. He also has his own podcast!

True, Borgen, and Carrick all have two-way deals, so they will make lower salaries if playing in the AHL.

Here’s a very important update for you: a tree was planted Thursday outside the Kraken Community Iceplex, as witnessed by Sound Of Hockey’s own Andy Eide.

The Kraken also shared a pretty cool picture of the team’s locker room at the Iceplex via Twitter.

It is no secret that the Kraken see their cap space as an advantage over the rest of the league, especially after COVID caused the cap to stay flat for two years. Frank Seravalli—that future-seeing reporter that leaked almost the entire Kraken roster before the Expansion Draft—is now looking into his crystal ball once again and predicting that the cap will rise slightly next offseason to $82.5 million in 2022-23.

This is only a $1 million increase, so it’s not enough to move the needle for teams that are really strapped. Thus, the Kraken will likely maintain their advantage, assuming they don’t put themselves into cap hell with acquisitions.

The Flower shall bloom where he has been unfairly planted

This year’s Vezina Trophy winner and future Hall of Famer, Marc-Andre Fleury, was traded by the Vegas Golden Knights to the Chicago Blackhawks for a bag of pucks last week. The 36-year-old reportedly found out about the trade from his agent, who found out on Twitter. That is a tough look for the Golden Knights organization, after he had done so much to help cement that team in the community and the sports landscape as a whole.

Fleury had reportedly considered simply retiring instead of reporting to Chicago, but he confirmed this week that he will actually play for the Blackhawks this season, which instantly makes them a much better team.