How 2021 NHL free agency spending compared to other seasons 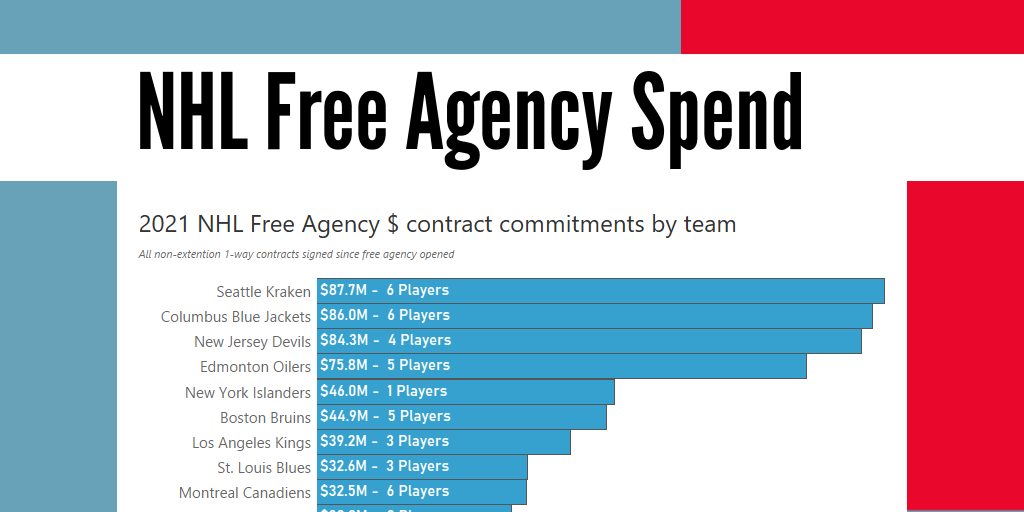 For this week’s Data Dump, we thought it would be fun to look at what has transpired in the 2021 NHL free agency period by the numbers. For the last year we have been talking about the salary cap crunch impacting most of the teams across the league. The 2020 free agency period illustrated that impact with overall free agency contract commitments down ~20% from 2019 to 2020. We also saw declines in salary cap hit, total contract value, and lengths of contracts as NHL general managers tried to navigate this flat cap challenge. With about two weeks of free agency under our belts, the question is whether or not this conservative approach would continue for 2021. Let’s find out.

The first thing we looked at is the total dollars committed by NHL teams in 2021 free agency. In other words, what is the sum of the total value of all free agent contracts signed? Since we still have 60+ days before the start of the season, we are showing it by day to have a more accurate comparable on where we stand during this free agent period.

As the chart suggests, GM’s are committing more dollars than any time over the last 4 free agent periods. However, there is a new team in the NHL this season and including the new team’s singings to previous free agent periods is not a fair comparable. For that reason, let us exclude Seattle Kraken signings.

When we filter out the Seattle signings, the total committed dollars are still up over the last four years but not nearly as much when we include the Kraken signings.

To get more insights on the free agent signings, we break out the number of signings, AAV cap hit, term, and total committed dollars by year. You can also filter by team and position as you see fit.

When looking at the detail, one area that stands out is a 26% increase year over year in total signings, and we still have 60 days of potential additional signings before the season starts. Part of this increase is driven by Seattle, but the Kraken have only signed six unrestricted free agents. 2021 has just happened to bring more free agents to the market compared to previous years.

The last step here is to look at the dollar commitments by team to determine who is spending and who is not.

With a relatively blank slate, there is no surprise that Seattle has committed the most money in free agency this year. Alex Wennberg, Jaden Schwartz, and of course Philipp Grubauer account for $76.4 of the $87.7 million in committed contract money. Not included in the Kraken’s numbers above is Jamie Oleksiak ($23M), Adam Larsson ($16M), and Chris Driedger ($10.5M) that were signed to contract extensions during the Expansion Draft, therefore prior to the free agency period.

From the data, cap spend and financial commitments to player payroll are close to pre-pandemic levels. This can and should tie the hands of several NHL teams in the next few seasons. Meanwhile Buffalo, Detroit, Ottawa, and Seattle are all well positioned to use their cap space as a weapon over the next few seasons. This will be an interesting strategy to monitor, as we are expected to remain in a flat cap era for at least another three seasons.