From the Thunderbirds to the Kraken, Alexander True has made a name in Seattle hockey 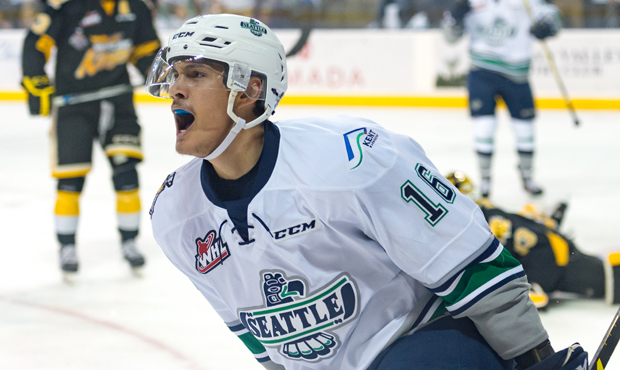 Growing up as a kid in Denmark, Kraken center Alexander True hadn’t thought much about the city of Seattle. That changed in 2014 when the Seattle Thunderbirds selected the 6-foot-5 center in the Canadian Hockey League’s import draft when he was 17. Now, seven years later, True’s a Kraken and his name is further etched into the history of Seattle hockey.

Seattle’s NHL club selected True in July’s NHL Expansion Draft from the San Jose Sharks, which puts him in the history books as an original Kraken and part of the franchise’s first roster. But before that, in May of 2017, he scored perhaps the biggest goal in modern Seattle hockey history with an overtime marker against the Regina Pats in Game 6 of the Western Hockey League’s Championship Series to give the Seattle Thunderbirds their first ever league title.

For a guy who grew up thinking he might have a shot at maybe playing pro hockey in Europe, Seattle has become a special place for the 24-year-old as he looks to be a full-time NHL player.

When the NHL teams released their protected lists True wasn’t surprised he was left unprotected by the Sharks after he spent the bulk of the previous four seasons in the AHL. He was visiting family when both his agent and San Jose Sharks general manager Doug Wilson called him to tell him the Kraken had selected him.

The emotions were mixed and True says he was happy in San Jose. But the idea of returning to Seattle had him happy as well.

“The first time we knew Seattle was going to get an NHL team one of my first thoughts was, it would be cool to come back and play in Seattle,” True says. “So, it was kind of a little bit of a cool dream to be back there one day.”

True’s first year in Seattle was the 2014-15 season with the Thunderbirds, but an injury cost him a big chunk of the year. The next two years he became an integral part of the Thunderbirds lineup and the team made two consecutive trips to the WHL Championship Series.

With a loaded team, True was relegated to playing the third center role – Seattle’s top center was New York Islanders star Mathew Barzal – but he still produced. He scored 39 goals over his last two seasons with the Thunderbirds, but it was in the playoffs that he had the most impact. In 2015-16 he scored six goals and 10 points in the postseason as Seattle fell to the Brandon Wheat Kings in the Championship.

The next year, True was even better. He stepped up into the top center spot while Barzal was out with an illness during the first round, and ended up with 12 goals and 22 points in 20 games.

And, of course, the big goal to win it all.

While with the Thunderbirds, True was coached by 13-year NHL player Steve Konowalchuk.

“He didn’t get enough credit for what he did,” Konowalchuk says of True. “He kind of slid under the radar, but he was every bit as important to what we did. He was unbelievable as a net-front presence on that first power play unit and was so dangerous. The other strength he really had, as a center, he was so good at carrying the puck out of his own end and into the neutral zone… that’s something that is so important at the next level.”

True went undrafted but would eventually sign an AHL contract with San Jose to play for the Barracuda the summer prior to the 2017-18 season.

After his first year in pro hockey, the Sharks would sign an NHL contract with True, and he would make his NHL debut in 2020. He’s only played in 19 NHL games to date, both over the past two seasons, but he has been a productive player in the AHL, chipping in offensively, killing penalties, and playing a strong two-way game.

Konowalchuk not only coached him, but as a pro scout with the New York Rangers the past two seasons got a look at True both in the AHL and in the NHL.

“He can definitely play in the NHL,” Konowalchuk says. “There’s no question that he went out and proved he could be a fourth line, penalty killer. The challenge for him to be a mainstay is what is he going to bring to the table? I think the way you do it is to be a responsible defensive center that can kill penalties and he can definitely kill penalties. So, he has to carve out a role by blocking shots, and doing those kind of things.”

What’s next for True and the Kraken?

True says he has heard from former Thunderbirds teammates Ethan Bear of the Carolina Hurricanes, and Keegan Kolesar of the Vegas Golden Knights as well as his Seattle billets to share in the excitement of being back in Seattle.

The attention now turns to the Kraken and what role he can play.

He’s a player who’s been on the cusp of staying in the NHL and will have a shot with the Kraken. Seattle is thin at center and with Yanni Gourde missing the first part of the season, True will have a chance to impress during training camp.

He’s got the size, is a strong defensive center who plays hard, and has some offensive flash. There’s a good chance that he’ll again split time between the AHL in Charlotte and the NHL, but don’t be surprised if he starts the season with the Kraken.

True’s had a taste of the NHL game and the speed and skill that’s needed. He’s well aware of what he needs to do in order to stick.

“It’s a good league and you have to play really well to stand out,” True says. “Especially when you’re playing against the best players in the world, so I need to play my ‘A’ game. Every single night, every shift I get and don’t take any nights off.”

He says that the only Kraken player he knows is Joonas Donskoi from their brief time in San Jose together. He’s taken part in a Zoom meeting to get to know the rest of the team, however, and is excited to meet his new teammates in person.

True will be playing some hockey before he returns to Seattle. He’ll be in Oslo, Norway, August 26-29 playing for Denmark’s national team – something he’s done in the World Junior Championships and this year’s World Championships – as they attempt to qualify for the 2022 Olympics.

He hopes to be in Seattle the first week of September to take his shot and try to break camp with the NHL team.

True has seen the Kraken preseason schedule and knows the team will be playing games in the WHL’s U.S. Division buildings that he’s familiar with. That includes a game on Oct. 2 against the Calgary Flames at the accesso ShoWare Center where he played as a Thunderbird.

He hasn’t been back to Seattle since his time with the Thunderbirds and hasn’t yet laid eyes on the championship banner that he helped win hanging from the rafters.

“I would like it a lot to play in that game,” True says.

Playing in that game would be a perfect way to connect what True has done for the Seattle Thunderbirds in junior to the present and future with the Seattle Kraken.